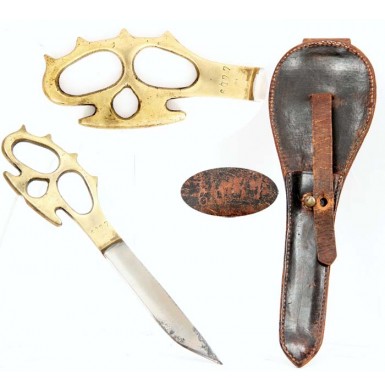 This is a wonderful example of a very rare World War II British commando fighting knife. These very scarce knuckle knives are known as “Death’s Head” due to the glaring visage that can be seen in the design of the brass knuckle hilt. Until recently little has been known about these knives, other than they were used by the 50th, 51st and 52nd British Commando units in the Middle East during the early days of the Second World War, and were probably procured and produced in Egypt. British GHQ, Middle East Land Forces, formed these three commando units between July and November of 1940. As was normal in the British military, the men who formed these commando units were British volunteers from other British army units. Some of which has also served as volunteers during the Spanish Civil War, fighting fascist forces in Spain. According to research published by Ron Flook in British And Commonwealth Military Knives, the design of the knife was inspired by a knife in the Cairo Police Museum that was referred to as the “fanny”, although is not clear where the nickname originated. The knives were produced locally in Egypt by at least a handful of cutlers, and minor variations are observed in the extant examples. The majority of the knives have a single edged blade that is reversed in the hilt with the edge “up” when it is held properly in the users hand, instead of the traditional downward facing orientation. This allowed the user to slit the throat of an enemy from behind without changing the grip on his knife. The blade was mated with a cast brass hilt that formed a wicked set of brass knuckles, which also resembled a maniacal face, resulting in the “Death’s Head” nickname. Most examples have blades that are approximately 6” in length and have an overall length of around 11 “. Some knives were manufactured with repurposed bayonet blades, often from British Pattern 1907 bayonets. Some extant examples have a four-digit serial number stamped on the brass hilt near the blade juncture and a couple of known examples also bear an inspection mark. The unique design of the wicked looking knife was so identifiable and inspiring to the men who carried them, that the British Commando forces who were issued the knives chose to adopt a miniature version of the knife as their unit designation pin and wore it on their bush hats with pride. The Middle East Commando forces 50 and 52 were rather short lived, and in February of 1942 they were combined to make the backbone of a new, larger special operations group called “Layforce” for their commander Colonel Robert Laycock. However, the 51st commandos remained in tact as an autonomous force during this period. The units participated in most of the British Middle East campaigns during the first half of 1941, including the Raid on Bardia, the Syria-Lebanon campaign, the Twin Pimples raid and the siege of Tobruk. In August of 1941 both Layforce and the 51st Commandos were disbanded. Some members went on to establish Mission 204, a unit that supported and trained Chinese “Surprise Troops’ who were Nationalist Chinese guerillas fighting the Japanese in their own country. Other former Middle East commandos saw service in similar roles in Burma, as well as teaching at the Bush Warfare School in that country. Many more returned to the original regiments that they had volunteered from, or went on to service in other British command units. No doubt many of these former Middle East Commandos carried their “Death’s Head” knuckle knives with them to their new units, resulting in the knives seeing use around the globe.

This particular British Middle East Commando “Death’s Head” Knife is in FINE condition and is complete with its rather scarce, original scabbard. The knife is a unique fighting weapon that is both a standard-issue fighting knife, and by definition a “theater knife”, as it was produced in the theater of operations. The knife has the typical thin, wicked 6” long, with a reversed edge, mated with the readily identifiable “Death’s Head” brass knuckle hilt. The entire hilt is about 5 ““ long (from the butt end to the blade joint), and the brass knuckle grip measures about 4 ““ x 2 “. The blade shows some patches of very light pinpricking and oxidized age discoloration near the tip, and running back irregularly along the spine and edge of the knife. It might be possible to clean and reduce the age discoloration, but I will leave that to the new owner. The balance of the blade is bright and shiny and has probably been lightly cleaned. There is no pitting present on the blade. The brass knuckle hilt and guard has a bright golden patina with a mustard undertone. The hilt has been cleaned as well at some point in time, and is just starting to tone down. The reverse of the hilt is serial numbered 6077 in individual die stamps. The “6” and the “0” are little light and also look to have been re-stamped over the original numbers (also “6” and “0”), and it looks like the original numbers were stamped too close to the edge, preventing the entire 4-digit number from being stamped. The brass knuckles have a lovely smooth appearance over the portions of the hilt that were regularly handled and saw wear, but retain crude file marks in the nooks and crannies of the grip. There is brass flowing onto the ricasso of the blade at the blade junction, which is typical of genuine examples of these knives showing that the blade was cast into the hilt. The knife is accompanied by its original leather scabbard, which is in FINE condition as well. The scabbard is marked with the same serial number, 6077, stamped on the face of the belt frog, above the throat, with the same individual dies as used to mark the knife. The scabbard retains much of its original leather finish, with only the expected loss from service and use. This is primarily due to scattered scuffs, scrapes and some moderate crazing. The scabbard remains solid throughout with tight original stitching. The original belt loop is in place on the rear of the scabbard frog, and will accept a 4” belt. The original leather retaining strap is in place on the scabbard, as is the original brass closure button. The strap shows significant surface crazing and use, and the middle of the strap is worn and starting to weaken. It should be handled carefully in order to keep it from breaking eventually. Otherwise, the scabbard has no real condition issues and matches the knife wonderfully. There is a word or name lightly scratched into the rear of the scabbard that appears to say BOISAI, but I can’t quite make it out.

Overall this is a really great example of a very scarce and desirable British fighting knife from World War II. As scarce as these knives are, an example accompanied by its original scabbard with matching serial number is even more difficult to obtain. The “Death’s Head” brass hilt is very striking and makes the knife look particularly wicked and imposing. This will be a wonderful addition to any advanced fighting knife collection, especially a collection of knuckle knives. The dramatic appearance will make it a wonderful centerpiece in your collection and you will be very proud to display it.