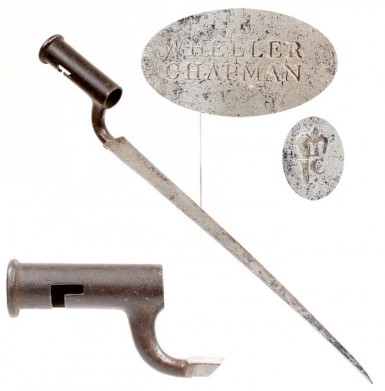 In 1795 the British Board of Ordnance adopted the India Pattern 1795 Sergeant’s Carbine for use by the non-commissioned officers of infantry in the field. For all practical purposes, the musket was a scaled down version of the full sized Infantry India Pattern 1795 Musket, with a 37” barrel instead of a 39” barrel and of “carbine bore” (about .66 caliber or 17-Bore) rather than the full sized infantry musket bore of approximately 11, or roughly .76 caliber. For the purposed of clarity I am using the pattern designations applied by English arms researcher and author DeWitt Bailey, the best source on the subject. There is some level of confusion in written texts, as earlier volumes appear to refer to the same pattern arm as the Pattern 1807 Sergeant’s Carbine, suggesting that while the Board of Ordnance may have approved the pattern in 1795, significant quantities may not have been produced (or contracted for) until that later date. The “Sergeant’s Carbine” was a concept that had evolved from the lighter “fusil” type arms that had been preferred by company grade officers and NCOs who had fought in North America during the Seven Years War (French & Indian War) and the American Revolution. During these conflicts the traditional pole arms of NCOs and Junior Officers were of little practical use when fighting in the confines of a heavily forested land, and also marked the men carrying them as preferred targets for American snipers. As a result, a smaller, lighter version of the infantry musket was adopted and carried by many of these men, based upon the French “Fusil de Chasse”, literally “hunting gun”, but quite definitely the progenitor of the “musket fowlers’ that would arm so many of the colonial militia during the French & Indian War, as well as the American Revolution. The primary British modifications with the official adoption of the pattern were to make it as a scaled down, lighter weight infantry musket (but still heavier and more robust than a traditional French “fusil”), and to equip it with sling swivels and the ability to mount a socket bayonet. To that end, the Board of Ordnance adopted the India Pattern 1795 Sergeant’s Carbine Socket Bayonet (referred to by Skennerton in his work British & Commonwealth Bayonets as the P-1797). Like the gun to which it was affixed, the bayonet was a scaled down version of the India Pattern Socket Bayonet with a reduced bore size and shortened socket and blade. The most obvious difference between the two being the 13” blade of the carbine bayonet, versus the 17” blade of the musket bayonet. The “carbine” bayonets were produced by the same group of contractors that produced the regular India Patter musket bayonets, with the majority of the cutlers being from Birmingham (or the surrounding regions), but with cutlers from London represented as well. While the India Pattern 1795 Sergeant’s Carbine saw only limited use in North America during the War of 1812, it saw significant service during the Napoleonic Wars in Europe.

Offered here is a VERY GOOD+ to NEAR FINE example of the India Pattern 1795 Sergeant’s Carbine Socket Bayonet. The bayonet is clearly marked with the contractor name WHEELER & CHAPMAN in two lines near the ricasso. While my references list Robert Wheeler as a Birmingham based cutler producing swords and bayonets for the Board of Ordnance circa 1804-1809 (succeeded by his son as Wheeler & Son c1809-1846) I could only find a single reference to a “Chapman”, even though a picture of this very blade mark is shown in Skennerton’s book in the section on India Pattern socket bayonets and their contractors. According to Skennerton, William Chapman was listed in an 1818 Staffordshire directory as a “farmer & bayonet maker” (an odd combination one would think), who worked as a sub-contractor for Thomas Hadley. Hadley was a Board of Ordnance contract cutler who produced bayonets from about 1776 to 1815. As it was not uncommon for bayonet makers to sub-contract work or work together for a specific contract (particularly in times of national crisis) it seems reasonable that this bayonet was produced as a joint effort by Richard Wheeler and William Chapman circa 1807-1810, and is less likely to be from the “& son” period of the Wheeler operation. The blade is also marked with what appears to be the remains of a partial “Broad Arrow” on the ricasso where the blade meets the neck of the bayonet, and with a (CROWN) / 1” inspection mark about 1 ““ from the neck. The inspector’s number under the “Crown” is a two-digit number starting with “1”, but the second number is not clear. It most likely, in my opinion is a “9”, but it could be something else. As most Birmingham inspection marks are single digit, the fact that the Board of Ordnance may have had 19 inspectors working in Birmingham during the same period certainly attests the “national emergency” presented by Napoleon. The bayonet conforms to the expected Sergeant’s Carbine dimensions, and they are as follows:

As noted above the bayonet remains in VERY GOOD+ to NEAR FINE condition. The blade has a medium pewter patina with scattered patches of light surface oxidation and darker age discoloration. The blade is mostly smooth, with lightly scattered pinpricking and some light pitting, most of which is on the rear portion of the blade, which is iron, while the forward portion (made of steel) shows less pinpricking and light pitting. An angled weld line is visible in good light, running from about 7 ““ from the tip on one side to about 9” from the tip on the other side. This method of construction allowed the stronger, harder to work steel to be the front portion of the blade and the easier to work and somewhat softer iron to make up the rear most part and the socket, where the shock of stabbing a victim would be absorbed. The steel tip also held an edge better and was easier to keep sharp. This method of using both steel and iron in British bayonets would continue through the last part of the 19th century, and use of a iron to steel bayonet blade, welded at an angle would be a regular practice on Confederate made socket bayonets of the American Civil War era. The socket and shank of the bayonet have a thickly oxidized brown patina, and the iron socket and shank show evenly distributed moderate pinpricking and light pitting over their surfaces. The standard three-step mortise remains in crisp condition and the socket remains in nicely rounded condition, with the expected reinforcing ring and bridge at the rear of the socket.

Overall this remains a very nice example of a fairly scarce British “carbine bore” socket bayonet from the era of the Napoleonic Wars and the War of 1812. These bayonets are significantly less common than the India Pattern musket bayonets that were produced in huge quantities and do not appear for sale on the market regularly. This bayonet is nicely maker marked and inspected and has a very nice overall appearance. If you have an India Pattern 1795 Sergeant’s Carbine this would be a nice addition to display with it. It would also be a great addition to any collection of British socket bayonets from the early part of the 19th century.