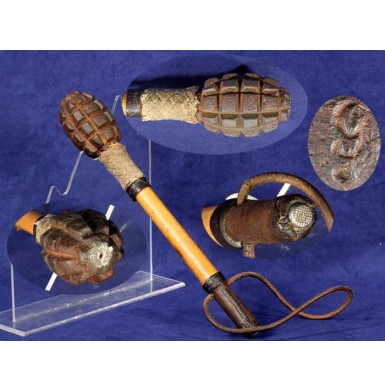 Offered here is a wonderful example of an English field-made trench club, based upon the classic “swagger stick” favored by aristocratic officers on both the English and German sides during the period. The improvised club combines two forms of trench club encountered from time to time, 1) the variation on the swagger stick form and 2) one that uses recovered ordnance to create the weighted head. The club is one of the shorter examples, measuring only 13 ““ in overall length. It is constructed with a rattan or bamboo haft that is nominally 27/32” in diameter and which measures about 10 3/8” in length. The haft is topped with a repurposed French F1 (Fusante Nr. 1) fragmentation grenade. The grenade is marked with a 9 over a dot on one of the fragmentary sections. The haft has a 2 ““ leather grip sewn to its base, with a pair of decorative ““ wide leather bands attached to the haft as well, one above the grip leather and one below a 1 7/8” long section of woven cloth located at the base of the grenade head. A leather thong is attached through a small hole at the base of the shaft. A 7/16” piece of round checkered metal forms a sort of pommel cap at the base of the haft. This suggests that a thin piece of steel may be inside the wood haft, securing the bottom for the grenade to the haft via the peened and checkered pommel cap. The club weighs in at a handy 21 ounces (1.33 pounds), with most of the weight at the end where it would cause the most damage when swung.

The club remains in VERY GOOD+ overall condition, showing good age, use and wear without any substantial abuse. The grenade head has an evenly oxidized brown patina with scattered minor surface roughness. The haft shows scuffs, wears and minor mars. The grenade head feels a little loose on the shaft so its days of being used as a cudgel are probably over. The woven collar around the base of the head is starting to fray and shows discoloration and accumulated dirt from time and age. All of the stitching in the leather collars and grip remains tight, with the leather showing the expected scuffs and handling marks of a melee weapon.

Overall this is a very attractive, solid and original example of a World War One Improvised British Trench Club. This particular club is from the collection of noted trench club researcher, collector and author David Machnicki, author of At Arm’s Length “ Trench Clubs and Knives Volumes I & II. This club is pictured and described on page 36 of Volume I. Real First World War trench clubs do not appear on the market very often, although well-crafted fakes do from time to time. For any collector of Great War small arms, the Trench Club is one of the most intriguing weapons for that conflict, a throwback to man’s primeval urge to fight for survival using the most basic of weapons, in a war that featured the most advanced technology of the time.