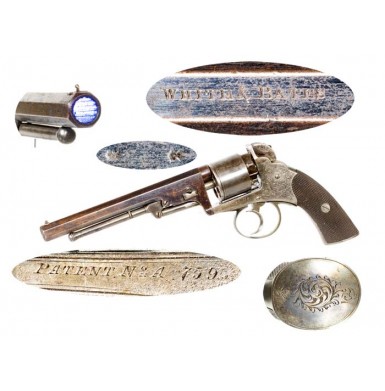 On December 4, 1852 Joseph Bentley received British Patent No. 960/1852 for a percussion revolver, and on April 4 of 1854 received an additional patent for “improvements to the revolver”, No. 768/1854. Bentley was a long time Birmingham gunmaker, who specialized in handguns and was listed in the directories of the time as a “Pistol Maker”. He opened his business in 1829 at 11 Steelhouse Lane, where he was listed as a “Saddle Pistol Maker”, specializing in the single-shot, muzzleloading “military sized” handguns of the period. By 1839, he was working towards producing the new, innovative repeating pistols and received his first British Patent, shared with gunmaker George Stocker. Their patent, No. 8,024 issued on April 9 of that year, was for a pepperbox revolver. In 1844, he received British Patent 10,280 for “nipples mounted parallel with the bore of guns”, a concept essential to the eventual manufacture of revolving percussion pistols with a multi-shot cylinder and a single barrel, rather than the simpler “pepperbox” concept. It was, however, Bentley’s 1852 patent for a self-cocking (double action) revolver design that would make his name synonymous with many of the major British handgun makers of the mid-19th century. His design was for a double-action only revolver with an open frame, a spurless hammer, and unlike the Colt design, one that did not incorporate a bolt-stop in the bottom of the frame that engaged a slot in the cylinder’s side to insure positive lock up when the gun was indexed. Instead, Bentley’s system locked the cylinder from the rear when the trigger was fully pulled by pivoting an arm actuated by the trigger to engage the side of a wing on the rear of the cylinder that prevented the cylinder from rotating out of battery. Rather than incorporating a half-cock in the mechanism to free the cylinder to rotate for loading, Bentley devised a simple hammer nose safety that allowed the hammer to be rested just off the cones on the rear of the cylinder, with the safety pressing against the frame. Pulling the trigger to fire the gun automatically disengaged the safety device. Bentley’s revolver was designed with a cast, malleable iron frame with an integral grip frame, and a wedge retained barrel that was secured to the central cylinder arbor pin that screwed into the rear of the frame. It is likely that the use of the Philip Webley patented “wedge frame” design gave rise to the long-standing reference to most of the revolvers produced along these lines as “Webley-Bentley’s”, essentially a misnomer. Bentley certainly produced his own pattern of revolvers that did incorporate the wedge frame system but were otherwise based entirely on his own patents or designs in the public domain. Webley likely never produced a Bentley patent revolver, but likely sold some made by other Birmingham gun makers with his own retailer mark on them, thus lending to the confusion. However, the huge number of “Webley-Bentley” revolvers produced in Birmingham during the mid-19th century had little to do with either gunmaker. Those guns were cheaply made, had the general appearance of the Bentley design, but were quite different. These “Webley-Bentley” guns rarely incorporated Bentley’s patent hammer safety, instead relying upon the simpler, frame mounted spring safety found on the M1851 Adams revolvers. These cheaper guns were almost always produced with a removable side plate for access to the action that was based on the Bentley double action lockwork. Bentley manufactured revolvers, on the other hand, were made with solid cast iron frame without side plates, always used his patented hammer safety and were nearly always produced with his own patented loading lever system (covered under Patent No. 768/1854) that based upon the Colt system. Interestingly, it appears that Bentley did not produce a large number of these guns, with British authors Taylerson, Andrews & Firth noting in The Revolver 1818-1865 that extant examples of Bentley Revolvers are found in the 1 to 850 serial number range, with an “A” pre-fix appearing around #200. They suggest that his production of this model may have only been around 850 pieces, making a real Joseph Bentley made Bentley revolver rather scarce. They further note that most of the guns are marked by Bentley, although a handful do exist with the names other Birmingham gunmakers and retailers, however these are far from common. Bentley would receive additional patents during his lifetime, including No. 780/1856 for a percussion breechloading rifle and No. 2657/1857 for additional improvements to his loading lever. Joseph Bentley would go on to partner with Charles Playfair, forming the firm of Bentley & Playfair and would leave the trade in 1864.

Offered here is a very scarce, real Joseph Bentley manufactured Bentley Percussion Revolver, not one of the cheaper Birmingham knock-offs. The gun has all of the features that you would look for to identify a true “Bentley “ Bentley”. It has a solid, cast iron frame without a sideplate, it has Bentley’s patented hammer nose safety and loading lever, and has a Bentley production range serial number: A 759. The revolver is chambered in 54-bore (.443”), has a 7”, octagonal barrel and it rifled with fourteen fairly deep, but narrow grooves with a relatively fast rate of twist. The revolver has a “self-cocking”, double action only lockwork, a five-shot cylinder and a two-piece design with a wedge securing the barrel assembly to an arbor pin that is screwed into the iron frame. The frame is delicately engraved with tight floral motifs that appear to be the predecessor to the tight “bank note” style engraving that would become popular on high end English sporting arms during the next few decades of the 19th century. The frame has nearly full engraving coverage between the grip and the recoil shield and the hammer, butt cap and triggerguard are engraved en-suite. The revolver is blued, with a color casehardened cylinder and butt cap and is fitted with two-piece checkered walnut grips with round German silver escutcheons. A simple notch in the rear of the frame serves as a rear sight and a blade front sight is dovetailed into the top of the barrel, near the muzzle. The left side of the frame is engraved: PATENT No A 759. The top flat of the barrel is retailer marked: WHITE & BATES. The only other markings are the usual Birmingham commercial proof marks, which are found on the lower left angled flat of the barrel and between the cylinder chambers, along with chamber numbers on the cylinder.

The revolver remains in about VERY GOOD condition and were it not for some evenly distributed pinpricking on the frame, would rate closer to “fine”. The barrel retains about 40% of its original bright blue, which has faded, worn and thinned. Much of the blue is found on the bottom barrel flat, where it has been protected by the loading lever, with the remaining flats all showing light to moderate finish loss. The casehardened cylinder has “silvered out” and has a mottled grayish patina. The frame appears to have been lightly cleaned at some point and has a dull pewter patina, with the scattered pinpricking mentioned above. The buttcap retains some nice traces of case coloring. The frame engraving remains nearly 100% visible and present but is simply not as crisp as when it was new. It is not surprising that the cast iron frame did not survive the years as well as the steel barrel assembly did. All of the metal shows some lightly scattered minor surface oxidation and some age discoloration, as well as some light pitting, particularly around the cylinder recesses and near the muzzle. The frame shows an old, barely discernable, repaired crack at the upper rear where the hammer nose safety would rest against it. Again, this is not unexpected, as case iron tends to be brittle and subject to cracking after multiple impacts. The repair is barely noticeable and is mentioned for exactness. The revolver remains mechanically functional, with action working exactly as it should, timing and indexing perfectly. The hammer safety remains fully functional, as does the loading lever. The loading lever retention spring under the barrel is partly broken with one arm of the spring missing but the lever still locks into place as it should. The cylinder appears to retain all of its original cones (nipples), however a couple of them are chipped and damaged. The bore of the revolver is about GOOD, showing evenly distributed oxidation and light pitting with strong rifling. The bore is dark and dirty, and a good scrubbing might improve it some. All markings remain clear and crisp in the metal. The two-piece grips are in VERY GOOD condition. They remain solid and complete with no cracks or repairs but do show scattered bumps, dings, mars and some flattening to the checkering. The German silver escutcheons show some build-up of old, green verdigris.

Overall, this is a nice, solid example of a fairly scarce pre-Civil War British percussion revolver by its actual inventor, a gun not often found for sale. It remains in nice condition with some very nice original blue on the barrel, is theoretically one of only 850 produced and is even more uncommon with a non-Bentley barrel mark. This gun was probably produced circa 1857, based upon the research done by Taylerson, Andrews & Firth, and would be a fine addition to any English percussion revolver collection.