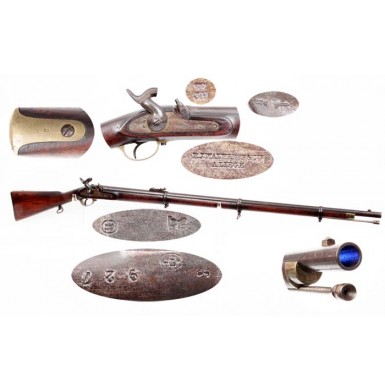 The gun is in overall FINE condition, and has a wonderful, untouched patina. The gun has an attractive oxidized plum-brown color, mixed with some traces of the original blued finish. This appearance is consistent over the entire gun. The metal of the gun is almost entirely smooth, with only some lightly scattered peppering and pinpricking present, with some more moderate pinpricking present in the breech and bolster area. This is typical of percussion arms that saw any use and service. The lock plate has a mostly smooth, mottled, gray-brown patina. The brass triggerguard has a lovely, medium golden patina, with the buttplate having been polished at some point in time and being somewhat brighter. The buttplate is marked with Malherbe’s (CROWN) / M mark. The lock functions crisply and correctly on all positions and remains mechanically excellent. The musket retains its original rear sight, and its original Spanish pattern percussion cone (nipple), which has rectangular, rather than square, shoulders. The original front sight/bayonet lug is present as well. Both of the original sling swivels are in place, one at the rear of the brass triggerguard tang, and one on the middle barrel band. The ramrod in the channel under the barrel is an original, Spanish pattern rod with a straight shank and brass tipped tulip head. The rod is very similar to the Austrian M-1854 Lorenz ramrod of the period and has a torque hole through the head, just like the Austrian rods do. The rod is the correct full length at 39 “, retains the original threads at the end. The bore rates about VERY GOOD+ condition overall, with strong rifling present its entire length. The bore is dark and well seasoned, but may clean up somewhat with a vigorous scrubbing. The bore shows light pitting scattered along its entire length. The stock is in about FINE condition as well, and shows only the usual assortment of bumps, dings, impact and wear marks that are associated with a 150 year old military musket. The stock retains very crisp lines and edges throughout, and shows no indications of having been sanded. The wood to metal fit is very fine throughout, and excellent workmanship is clearly evident. The stock is full length and solid and free of any breaks or repairs. At the tail of the stock flat, opposite the lock, is the remnants of an oval, US style, inspection cartouche. However, the cartouche is not legible.

Overall this is an extremely attractive, complete and untouched example of a percussion rifle musket that is rarely encountered for sale in America. It is difficult to know for sure how this musket arrived here, and whether or not it has a direct Civil War link, like the M-1857 Spanish Short Rifles do. However, this Belgian made gun is a very close copy of an Enfield, but is void of the usual Spanish acceptance proof. This suggests that the gun never reached Spain. The presence of the (CROWN / JH) mark, that I feel is that of arms dealer James Hoey of New York, further suggests that this gun may have come to America as part of a Civil War arms shipment. The presence of what looks to be a US inspection cartouche on the stock flat lends more support to that theory. One way or the other, it is a very scarce Spanish military pattern rifle musket, made by one of the best-regarded Belgian makers, and in wonderful condition. This is one of those wonderful guns that you simply don’t have to worry about all of your collecting buddies saying, “I’ve got one of those too” when you show it to them. You will be quite pleased to add this fine musket to your collection of 19th century military arms.