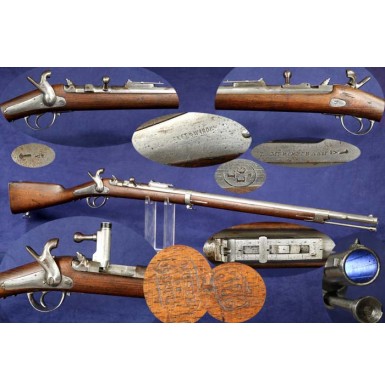 The American Civil War is often considered a major turning point in the technology of warfare. From the significant use of repeating, metallic cartridge small arms to the Petersburg trenches that foreshadowed the no man’s land of the Western Front, it was in truth the first truly “modern war”. With its conclusion, it was clearly obvious the that days of the muzzleloading percussion infantry rifle musket were over, and that the battlefield belonged to the breechloading rifle firing a self-contained cartridge. In Europe, this was not new knowledge, and the fearsome firepower of the Johann Nicolaus von Dreyse’s Zündnadelgewehr (needle gun) gave the Prussian army a weapon that had no equals on the European battlefield of the early 1860s. The period of 1865-1867 represented a time of significant change for the military forces of the world as new infantry firearms systems were adopted. In the United States, numerous patent arms systems were tried from a number of inventors and makers, but the ever-cautious Board of Ordnance decided to modernize by modifying the huge stocks of existing muzzleloading arms to breechloading cartridge arms via the Allin conversion system, better known as the “Trapdoor” system. Over the next few years this system would be improved upon nearly every year until the 1873 series of arms were adopted; along with a newer, smaller, .45 caliber cartridge. In Great Britain, a similar desire to use the huge stocks of existing arms resulted in the adoption of the Snider alteration system. Like Allin’s system this turned muzzleloading rifle muskets into breechloading, cartridge arms, and like Allin’s system it was an American design; that of Jacob Snider. In France, the ever-present specter of militaristic Prussia and their desire for French territory, armed with the very modern Dreyse needle rifle, motivated the French to adopt a bolt action firearm; the M-1866 Chassepot. The Chassepot was a more modern and improved version of the Dreyse concept, the primary improvements being in the adoption of a smaller caliber and ballistically superior cartridge, and improvements in obturation; sealing the breech to prevent gas leaks. This decision by the French came not a moment too soon, as the Prussians demonstrated the overwhelming superiority of their Needle Rifles during the 1866 Austro-Prussian War, where Prussian infantrymen could exceed the rate of Austrian infantry fire by a factor of 5 to 1, even with the Prussians firing from the prone position, while the Austrians usually had to stand to load their guns. The French, however, knew that their ability to produce Chassepots was not in keeping with their needs, and they also adopted an alteration system to adapt their huge stocks of muzzleloading arms to cartridge breechloaders. The system they adopted, the Tabati’re (“snuff box”), was similar to the British Snider system. It was applied to muskets as old as M1822 flintlocks that had been altered to percussion, as well as to more modern muzzleloading rifles like the M1853, M1857 and M1859 series of “Chasseur’s” rifles. While original military configuration Tabati’re rifles and muskets are rather scarce today, many of the sporterized civilian versions live on as “Zulu Shotguns”. The Tabati’re fired a very large, nominally 18mm cartridge (about .70 caliber), that is known to be the largest breechloading infantry rifle cartridge to see military service. The 18x35R cartridge was hardly the ballistic equivalent to the Dreyse cartridge, and tremendously inferior to the Chassepot cartridge, but was a huge improvement over a percussion muzzleloader.

In 1870 the Franco-Prussian War broke out and even the stocks of Tabati’re rifles and muskets, in conjunction with the Chassepot, was not enough to arm the French and stem the flow of the Prussian tide. The French, much like the Union and Confederate governments a few years earlier, scoured the globe to buy any and all surplus military arms they could obtain. From the US, they acquired obsolete rifle muskets, as well as more modern cartridge firearms ranging from Spencer rifles and carbines to M1866 Allin conversions and even some newly delivered US contract Rolling Block rifles. From European countries, they bought what they could, probably with an eye toward acquiring cartridge breechloaders first, and if they were chambered for the Tabati’re cartridge, all the better. All of this background bring us to the rifle offered for sale here, a gun that I have been able to find almost no information about, but one that upon examination would clearly be considered a Franco-Prussian War period arm, and one that might have been submitted for trials or evaluations by the French.

The rifle is a Belgian made M1853 Pattern Rifle (technically if it has as steel barrel it would be a M1857), that was manufactured by the Belgian firm of Drisket & Waroux, and whose mark is found on the back action lock, along with various typical Belgian initial markings of D&W on the lock and lock screws. The firm operated in Li’ge from 1856-1872, becoming Drisket, Andre & Company in 1872 and going out of business four years later. The rifle obviously started its life as a standard percussion infantry or chasseur’s rifle, but was subsequently altered to breechloading cartridge in a somewhat ingenious way. In a sort of combination of the Allin/Snider/ Tabati’re school of alterations, the gun has a hinged breech block, but unlike those systems the block includes a bolt system and an obturator. One of the initial downfalls of both the Snider and Tabati’re designs were the lack of a locking system to keep the breech closed, this was of course improved upon and modified in later versions. This rifle eliminates the problem by using a sliding bolt that rotates through about 90-degrees to achieve a positively locked breech. By placing the rifle on half-cock, the bolt handle can be rotated upwards 90-degrees, and pulled back about 3/4'“. This disengages the bolt face from the chamber and clears the chamber hood by about 1/8”. The bolt can then be rotated upward via a hinge at its rear, sort of like a backward “trapdoor” breech. A cartridge can then be placed in the chamber, the bolt swung back down into position, pushed forward (fully seating the cartridge) and rotated back down to lock the breech. Pulling the hammer to full cock and pulling the trigger allows the rifle to be fired. The ingenious and rather elegant “trapdoor bolt” is marked L Merckelbagh along with a (CROWN)/Y inspection mark and a Li’ge Perron inspection mark. Despite my best efforts, I have not been able to find anything out about “L Merckelbagh” and his rather ingenious centerfire conversion system for muzzleloading rifles. As would be expected a Li’ge E/LG/* in an oval proof mark is present on the breech of the rifle. The rifle has a nominal muzzle diameter of 18.2mm and appears to be chambered for the 18mmx35R Tabati’re cartridge. The bore is rifled with four-shallow grooves of about equal width to the lands. The barrel measures 30 ““ to the breech opening and 34 ““ to the end of the breech, with the rifle having an overall length of 49 “. It is iron mounted throughout, with two barrel bands, a triggerguard tang with two finger grooves and a pair of sling swivels, one mounted on the lower band and one in the toe of the stock. The standard French pattern 1,000-yard (meter”) ladder rear sight is in place, with a rifle style blade near the muzzle. A .56”x.41” bayonet lug with a 3 3/16” long keyed extension allows the rifle to accept the classic French brass handled saber bayonet. What appears to be the original and correct, heavy cupped ramrod, now a cleaning rod, is in place in the channel under the barrel. It is numbered 4782, the relevance of which is not clear as no other parts of the rifle are numbered. The only other marks on the rifle are two cartouches in the obverse stock. One appears to be an inspection style mark, which seems to be a script JH (or possibly “FH”) in a rectangular box with rounded edges. The other mark is somewhat more intriguing and reads: MUSEE / DE / MART’L, suggesting that the rifle was at one point a part of some museum collection of “martial” items. Further support of that is found in the museum catalog number 61.2.154 that is lightly electro-penciled into the triggerguard tang and the buttplate. Whether this was a French, Belgian or some other museum is not known and no internet search could find out to what institution the marking related. As there is not an official model designation that I am aware of for this essentially unknown military rifle alteration, for convenience I am going to call it a M1853/67, along the same line of thought as the model designation for the Tabati’re designation.

The rifle remains in about FINE overall condition. The metal has a pleasing pewter gray patina, with some scattered light age staining and some small patches of surface oxidation, most notably around the breech and just forward of the rear barrel band. There is some light pinpricking as well, but it is lightly scattered and minimal. The lock has been lightly cleaned, and the markings on it are a little weak and more pinpricking is noticeable there than anywhere else. The rifle is mechanically functional and the entire mechanism appears to work exactly as intended. The bore is about Very Good, showing some scattered pitting and areas of oxidation, but certainly capable of launching the 18mm Tabati’re projectile with at least some degree of accuracy. The stock is in FINE condition as well, it is full-length and solid and remains crisp, with two nice cartouches on the obverse butt. The stock shows numerous handing marks, bumps and dings, but no abuse or damage.

Overall this is one of the more interesting European martial arms I have had the opportunity to offer for some time. This comes from an old collection and has probably never been on the market in my lifetime. This rifle is certainly worthy of additional research and I look forward to hearing from some of my friends like Phil Schreier and Garry James who might be able to shed some more insight on this very cool weapon that I have christened the “M-1853/67 Bolt-Action Trapdoor” military rifle.