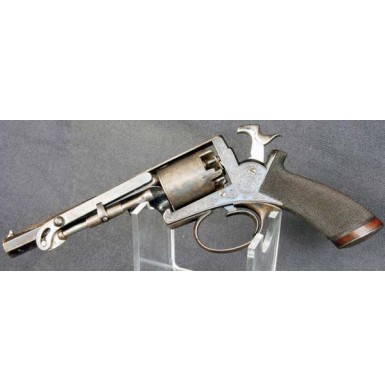 This is a nearly EXCELLENT condition example of an English Beaumont-Adams revolver with the rarely encountered Brazier’s Patent loading lever. The pistol is a Model 1854 pattern revolver in .54 Bore (about .442 caliber) and features Adams 1851 patent frame, the Adams-Beaumont double action lock work and Adams’s 1854 patent frame mounted safety. The pistol is marked on the top strap with the retailer mark of DEANE & SON . 30 . KING WILLIAM ST . LONDON BRIDGE. The story of Adams, his revolvers and his interrelationship with Deane & Son and Joseph Brazier is rather long and muddled, and would require an entire book to explain it effectively. To summarize briefly, Adams was a partner in the firm of Deane, Adams & Deane of London, from 1853 through 1855, when he joined the London Armoury Company and severed his ties with John Deane. Even after leaving the Deane partnership, Deane & Sons continued to produce and retail Adams patent revolvers, into the early 1870’s. Joseph Brazier was a very successful gun, rifle & pistol maker in Wolverhampton, Staffordshire from 1827 through 1849, at which time it became Joseph Brazier & Sons. That firm remained in business under varying versions of the Brazier name until 1987. Brazier patented a frame mounted loading lever for Adams patent revolvers and included these lever on both the guns that he produced, as well as offering them for sale to other gun makers who wanted to include the loading lever on the pistol. All of his levers were numbered, and to the best of my knowledge, the highest number encountered is around 900. Thus these loading levers are relatively rarely encountered on Adams revolvers. Typically, Beaumont “ Adams revolvers are double “serial numbered”, with one serial number that tracked the payments due to Adams on his solid frame patent and one with a “B” pre-fix to track the payments due to Beaumont on his lock work patent. The Adams serial numbers are often marked with a suffix letter that indicates the manufacturer using the patent (for example “T” for Tranter or “B” for Brazier). However, after the expiration of both patents, the guns are normally numbered with a single number and without any prefix or suffix letter. The Beaumont patent was the 2nd to expire, in early 1862, so these single serial number guns were most likely assembly after the expiration of his patent.

As previously noted, the pistol is in NEAR EXCELLENT condition. It retails between 70% and 80% (overall) of its original highly polished blued finish on the frame and barrel and the case hardened cylinder retains about 80%+ case coloring, which is now slightly faded and muted. The revolver retains the most finish on the frame and top strap, with the most wear and loss along the sharp edges of the 5 ““ octagon barrel, along the backstrap, the gripstrap and the triggerguard. The gun is engraved in the typical Deane & Sons pattern, with lovely scrolling floral motifs on the frame and attractive scrolling embellishments and details along the topstrap, and the gripstrap & triggerguard, butt cap and along the edges and muzzle of the barrel. The cylinder is marked with London proof marks between each chamber as well as on the barrel. The gun retains sharp, crisp markings throughout, with the Deane & Sons retailer mark clearly present on the topstrap and the marking: JOSEPH BRAZIER’s PATENT 662 on the loading lever. The lower right side of the frame is marked with the serial number No 29700. The lack of a second serial number, prefix or suffix is indicative of the pistol having been produced sometime after mid-1862. The pistol is in mechanically excellent condition, and the action works exactly as it should in both single action and double action modes. The action remains tight and crisp and it times and locks up perfectly. The original cones (nipples) are all in place on the rear of the cylinder and remain in excellent condition. The sliding safety on the right side of the frame is present and works as it should, and the cylinder pin retaining spring is in place at the front of the frame and works as it should. The Brazier’s patent loading lever is complete and works perfectly and very smoothly. Only the very tip of the retaining spring that keeps the lever in place along the side of the barrel is broken, so the lever does not lock securely into its resting position “ a very minor issue and not one that in any way effects the display of the pistol. The bore of the pistol is in about EXCELLENT condition, and remains mostly bright with very sharp and crisp rifling. The checkered one-piece walnut grips are in EXCELLENT condition as well, and retain sharp checkering throughout. The grips show only the most minor light handling marks and are completely free of any cracks, breaks or repairs.

Overall this is a really gorgeous condition example of an absolutely beautiful Beaumont-Adams double action revolver from the Civil War era. The pistol is 100% original, correct and in fantastic condition. The gun is mechanically excellent, and has a bore in fantastic condition. The revolver is just the kind that would have been highly prized by and Confederate officer and could well have been imported during the course of the war for private sale within the Confederacy. If you have been looking for a high condition Adams revolver to add to your collection, look no further. The rarely encountered Brazier’s patent loading lever makes the pistol even more attractive and collectible. This is truly one of those “no apologies necessary” pistols that could well be a centerpiece in your collection.