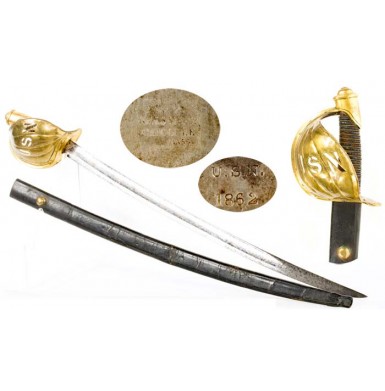 When the American Civil War erupted, the standard cutlass in use by the United States Navy was the Model 1841 cutlass that had been produced by Ames. The Model 1841 was a naval adaptation of the US Model 1832 Heavy (Foot) Artillery Sword. The M1832 was essentially a modernized version of the Roman Gladius. The naval variant of the sword had a short, wide, double-edged spear point blade with a cast brass fish scale hilt with a sheet brass half-basket guard. According to research by arms historian and author John D. McAulay, on May 18, 1861 the US Navy presented the Ames Manufacturing Company with drawings of a French naval cutlass that they desired to have manufactured for trials. The drawings were of the French Model 1833 cutlass. The French design featured a nominally 26.5” long, slightly-curved single edged blade with a spear point, a jappaned iron half-basket handguard and a hexagonal grip. The French cutlass was carried in a leather scabbard with a brass mounts, the throat of which had a raised staple shaped stud through which a leather strap could pass to secure the scabbard to a belt frog. The Ames version of the French cutlass has been known to collectors for years as the Model 1860 Naval Cutlass, however Mr. McAulay’s research indicates that the more correct nomenclature would be the Model 1861. Ames copied the basic French design. They retained the nominally 26” long, single-edged curved, spear point blade but replaced the iron guard basket with brass. Additionally, the French cutlass’ hexagonal grip was replaced with the more conventional, cavalry style grooved oval wood grip with a palm swell and leather covering with twisted brass wire. In the style of both American and French cavalry sabers, the pommel cap was of the Phrygian helmet form. The scabbard for the Ames version followed the pattern established with the earlier Model 1841, a simple leather scabbard without throat or drag that was seamed up the center rear with copper rivets. The Model 1860 scabbard added a brass frog stud to the obverse below the throat to allow the cutlass to be secured to a belt frog. The initial order for the cutlasses was placed by the Navy on June 5, 1861; with 8,000 being contracted for at the price of $4.53 each. Two months later, Ames had already delivered 600 cutlasses with 5,000 having been delivered by the end of the year. In December the Navy increased the order to 15,000 cutlasses. By February of 1862 the order had been increased to 20,000 and in July the order was increased again, this time to a total of 25,000. In addition to the standard seaman’s cutlasses, the US Navy acquired a small number of cutlasses for “officer”. These differed from the standard cutlass in that the brass basket was gilt, with the letters USN die cut out of its face. The “officer’s” version of the cutlass was further enhanced with some simple boarder line engraving around the edges of the guard and the tip of the leather scabbard had an embossed flower-shaped decoration at its tip.

There has long been some level of controversy regarding the designation of the “gilt”, die-cut guard M1860 cutlasses as “Officer’s Cutlasses”. Colonel Rankin theorizes in Small Arms of the Sea Service that these were really intended for Chief Petty Officers and by extension other “Warrant” type officers, such as the ship’s Master, Master Gunner, Boatswain, etc. These were the senior non-commissioned officers of the ships. Like their counterparts on land, the sergeants, these senior enlisted men were the heart of the crew’s leadership and the key to smooth sailing and hard fighting. No doubt Col. Rankin’s belief was based upon the fact that officers were required to purchase their own sidearms and were rarely issued swords, and a small number of inspected “officer’s cutlasses’ do exist. There is, however, one good precedent for the US Navy purchasing and issuing swords to their officers. When the Model 1852 Naval Officer’s Sword was adopted, replacing the preceding Model 1841 Naval Officer’s sword, the Navy purchased 500 of the new swords, inspected them and issued them to the current corps of officers. With this as precedent, it would seem reasonable that any “Officer’s Cutlass’ that is inspected is one that was acquired by the Navy via contract for issue. Based upon the very few references in McAulay’s book, it would be reasonable to believe that less than 100 of these inspected Officer’s Cutlasses, and likely less than 50, were acquired. The balance that were produced were privately purchased and used by officers as well as Petty Officers who could afford to acquire a personal cutlass of better quality. McAulay notes that 18 “Gilt Cutlasses’ were purchased in mid-1865 by the Navy at the rate of $25 each. If this price is indicative the prices charged during the height of the war, it would help to explain the relative rarity of this model. At $25 each, almost double what a Union infantry private was paid monthly and a price that exceeds what the Ordnance Department was often paying for pistols, carbines and rifle muskets, the purchaser would need to be wealthy in order to justify what would be an extravagance during the war. Naval officers were authorized to wear the Model 1852 Officer’s Sword and not the cutlass, so any such acquisition would be based purely on personal preference. Needless to say, the US Model 1860 Naval Officer’s Cutlass (Model 1861 according to McAulay and Model 1862 according to Harold Peterson) remains a fairly scarce item and is not regularly encountered as the more common enlisted cutlasses are.

The obverse ricasso is marked U.S.N. / 1862. There are no other markings on the cutlass. The cutlass is 32” in overall length, with a 26” slightly curved, single edged, spear-point blade with an 18 ““ fuller. The 6 ““ hilt has the expected gilt brass guard and pommel cap, with the half-basket guard die-cut with the letters U S N. The grooved wood grip is covered with leather and has 19 wraps of twisted brass wire. As noted, the cutlass remains in VERY GOOD condition. The blade has a mottled and oxidized patina with dark gray discoloration over a dull pewter gray base color. The blade shows some scattered light pitting as well as some scattered areas of surface roughness. The Ames scroll mark on the reverse ricasso is somewhat weak but remains legible. The U.S.N. / 1862 stamping on the obverse ricasso remains crisp and clear. The blade shows wear and use and some scattered small nicks along the edge of the blade. The brass basket hilt retains strong traces of the original gilt finish, particularly in the protected areas. The basket shows a handful of minor dents and dings, as would be expected from any cutlass that saw use. As is often the case with these cutlasses, the throat washer is missing at the hilt to blade junction. The grip retains its original leather covering and twisted wire wrap. The leather shows some scattered finish loss and flaking, as well as some very minor loss due to wear and age. The twisted wire is all intact but is slightly loose. The scabbard is in comparable condition to the cutlass. The leather shows scattered crazing and light finish loss, with some minor scuffing and scraping. There is a major crease about 13” from the throat, which is somewhat weak and should be handled carefully. A couple of much more minor creases are present about 5 ““ and 3 ““ from the tip of the scabbard as well. There is also a minor repair with a small piece of leather, about 1”x1” added on the obverse of the scabbard near the tip. The rear of the scabbard retains all 39 original copper closure rivets and scabbard seam remains tight and secure. The original embossed flower shaped decoration is present and fully visible on the tip of the scabbard as well. The original brass button frog stud is in place 2 ““ from the throat of the scabbard and remains securely attached. Both the base of the frog stud and most of the rivets show some nice green verdigris from their long time contact with the leather scabbard.

Overall this is a very nice, solid complete, correct and original example of a scarce US Naval Officer’s Model 1860 Cutlass. These are rather uncommon Civil War era naval edged weapons and are not often found for sale. This is a very good, upper mid-grade example with a nice, solid scabbard and an attractive hilt that would be a nice addition to any US Navy small arms collection or a collection of Civil War era edged weapons.