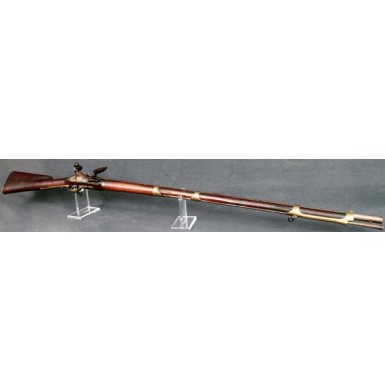 While the British "Brown Bess" and French “Charleville” pattern muskets are probably the best known of the long arms used during the American Revolution, muskets of Dutch origin saw use by nearly ever faction of the belligerents on both sides as well. Dutch gun makers centered in Amsterdam (as well as Rotterdam and Maastricht) established themselves among the premier arms makers in Europe in the mid-1600’s, a position they would hold into the late 1700’s/early 1800’s, when the gun making centers in Birmingham and Li’ge finally eclipsed their output and international trading reputation. In fact, even the British relied on Dutch made muskets at various times in the 1600’s & 1700’s. They purchased muskets from the Dutch prior to the establishment of the 1730 Pattern Long Land muskets, and while some authors refer to Dutch muskets of that era as resembling the early “Brown Bess’ muskets, the reality is that the 1730 Pattern muskets followed the Dutch lines of earlier purchases. The British also turned to Dutch makers during the early to mid-1700’s, as well as The Seven Years War (French & Indian War), to help arm the fledgling American colonies. Dutch muskets with both South Carolina (as well as later US) surcharges are known. Thousands of Dutch muskets were imported for use by the American forces during the war, and they saw service with both state volunteer regiments and with the Continental Army. The Colony of Massachusetts directly purchased several thousand Dutch muskets during the revolution, with the help of Benjamin Franklin. According to author and researcher Harold Peterson, nearly every surviving Dutch musket in America can be traced to the Bay Colony. The Dutch also provided muskets to the Hessian mercenaries that fought during the American Revolution, showing that they were non-partisan businessmen, and were glad to make money selling to either side.

While Dutch muskets of the Revolutionary War and earlier periods in the Colonies take many forms, the classic variant that is most associated with Revolutionary use was a light weight flintlock musket of roughly “Carbine Bore” and of a style more often referred to as a Carbine or Fusil by the British. These guns tended to be between .65 and .69 caliber smoothbores, with barrels around 40” long, built on lightweight stocks with slender wrists and fine lines. The locks typically featured iron pans, and were flat on early muskets (pre-1750) and rounded on later ones (post-1750). The barrels were band fastened, rather than pinned, with the hardware tending to be brass and the upper barrel band tending to be a very long, double-strapped band. This pattern of musket originated in the 1750’s and saw significant use during the Revolution. This is the pattern that was purchased by Massachusetts, and was also the same pattern captured in some numbers by the Continental Army after their successful capture of the Hessian defended outpost in Trenton, NJ on Christmas Night 1776.

The fabulous Dutch made musket offered here is the classic example of a Revolutionary War era musket from the “Low Country”. The musket rates ABOUT FINE in overall condition, with the metal in somewhat better condition than the stock. Rating the condition of Revolutionary War era muskets is always problematic due to their age. So often the guns saw many years of service over the last 250 +/- years and often period repairs are interspersed with older (and sometimes more modern) restorations. Due restocking programs and the constant cannibalization of damaged muskets for replacement parts makes finding Revolutionary era military muskets that retain all of their original components practically unheard of. The musket has a 40 ““ long. .69-caliber barrel retained by three brass bands and is just under 55” in length. The barrel is mostly smooth and shows only some scattered patches of minor peppering and pinpricking, with a mottled brown age patina over a light brownish-gray base patina to the metal. The upper brass band is double-strapped and nearly 8” in length. Both the upper and lower bands are retained by band springs, while the middle band is friction fit with no retention spring. The upper and middle bands are all marked with some sort of maker mark that is not obviously decipherable. The rounded lockplate with iron pan is clearly marked in two lines forward of the hammer: J Rousseau / a amsterdam. The lock is complete, correct and in its original flint configuration. The frizzen shows a period facing (resurfacing) “ a common feature on any flintlock musket that saw significant use. The mainspring is somewhat crudely manufactured period replacement. This explains the visible empty hole in the lock plate, where the original mainspring locating pin was originally located. The lock is in good mechanical condition and works correctly. All portions of the flintlock battery function as they should and retain their correct and original geometry. The top of the barrel is marked with an Amsterdam proof mark. The musket has the typical Dutch style sheet brass buttplate with a thin, semi-decorative tang that is retained by two flat head screws and is engraved with the issue or rack number: No 30. The bottom of the flat-heeled buttplate is secured by two massive round-headed screws, which protrude in the typical Dutch style. The gun retains both of its original sling swivels “ one on the front of the brass triggerguard bow and on the rearmost portion of the upper barrel band. The original trumpet shaped iron ramrod is present in the channel under the barrel and retains its original threads to attach cleaning implements at the end. The original bayonet stud is located under the barrel, approximately 1” from the muzzle and about 1/3” in length. The brass furniture has a medium mustard patina, having probably been cleaned long ago, and having finally toned to a very attractive hue. The original rounded serpentine side plate is in place, retained by the two lock mounting screws and the original brass triggerguard with a bulbous decorative acorn finial is in place as well. The stock is full-length and in about VERY GOOD+ condition for a Revolutionary War musket stock. The stock is full length and complete and shows the typical Dutch features of a slender wrist and deeply relieved comb, combined with a relatively short (about 12 “) length of pull. The butt is much smaller and more slender than comparable military muskets of the era, giving the gun the appearance of a fusil or officer’s carbine. The stock does show a couple of old repairs, but thankfully it appears that all of the original wood is in place. There is an old repaired crack on the left side of the upper stock that runs diagonally between the two straps of the upper barrel band. The crack is visible, but the repair appears quite secure and stable. There are also a couple of repaired cracks on the right side of the stock between the barrel tang and lock mortise. All of the original wood remains in place, and the cracks have been professionally and well glued. The wood around the lock shows darkening and minor charring, which is very typical of flintlocks that saw extensive use. The wear being the result of pan flash. The stock is lightly relief carved around the barrel tang area in a manner that is quite similar to the carving found on British military arms of the period. The stock does show a number of minor bumps and dings from normal use, as well as a handful of scattered flecks of old paint drops or drips, the origin of which are unclear. The stock has a deep, dark, un-cleaned look to it and appears to retain much of its original period varnished finish.

Overall this is a very attractive and very high condition example of a Dutch made Revolutionary War musket. The gun is complete and correct and is in original flint. It has not been restocked, nor does it have the replacement parts that are so commonly encountered on muskets of this age. The gun is mechanically functional and has a fantastic, unaltered look to it overall. These guns saw service on both sides during the war, and the rack number on the butt makes it quite apparent that this military style musket was in fact issued to a military organization of some sort. Original flintlock Revolutionary War muskets are rarely found in such a high state of preservation and this is one musket than any serious collector would be glad to add to their collection of Colonial era arms.