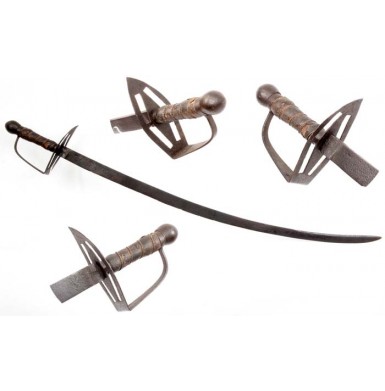 There is probably no more desirable or well known American Revolutionary War sword than the dragoon sabers made by James Potter of New York. These heavy cavalry swords were the gold standard in edged weapons for horsemen during that war, and Potter’s name was well known and often referred to during the period when referencing cavalry sabers. For many years, it was assumed that since the sabers were made in New York, by an American, that they must have been produced for the Patriot cause. However, even though the sabers were used and coveted by the Colonial dragoons serving under such luminaries as Light Horse Harry Lee and the Francis Marion (“The Swamp Fox”), they were actually produced under contract for the use of Loyalist and British forces. Erik Goldstein’s groundbreaking article in Man At Arms (Volume 29 #7 - Sept/Oct 2007) meticulously examines the Potter swords and period documents that refer to the swords, and their maker, and how and when the swords were acquired.

As Goldstein clearly demonstrates in his article, James Potter was a devout Loyalist. The first record that has been found regarding Potter in New York City is an October 16, 1776 list of New York city & county residents who have taken an oath of loyalty to the British government. This clearly establishes where Potter’s “loyalties’ lay. The next time Potter appears in a period document or newspaper is an advertisement that he ran in the Royal Gazette in New York, on June 13th & 17th, 1778. The ad was for a “forger” and “two or three filers” who should apply for work with “James Potter; Sword Cutler in Maiden-Lane”. Prior to this advertisement, there is no record of Potter working as a cutler or sword maker, and Mr. Goldstein assumes that in the preceding years he had been apprenticed to one of the master sword cutlers in New York at that time, like John Bailey or James Youle, Charles Bruff or Richard Sause. It appears that Mr. Potter found a ready and willing customer base for his newly established sword manufactory in the burgeoning Loyalist regiments that were being raised to fight the Patriots along side the British. As the American Revolution expanded southward and the fighting became more spread out, mounted regiments became essential to traversing the large distances and keeping the fighting men mobile. Horsemen needed horsemen’s sabers, and Potter was prepared to deliver them. In addition to these new “provincial” Loyalist dragoon regiments were some of the most famous British dragoon regiments to fight during the war, among them were the 1st American Regiment (The Queen’s American Rangers “ Simcoe’s), the 4th American Regiment (The King’s American Regiment) and the most infamous of all 5th American Regiment (The British Legion “ Tarleton’s) under Lt. Colonel Banastre Tarleton (The Green Dragoon). All of these mounted regiments needed sabers, as the saber was considered the primary weapon of the cavalry during that time. During the American Revolution, the British military was in the process of changing their system of regimental equipage from a Colonel based system to a government-based system. The “colonel” system harkened back to the days of the feudal lords, when the lord who raised the regiment also equipped it from his own pocket. In the more modern system the colonel supplied the regiment and was subsequently reimbursed by the government. This had been standard for over 100 years, but during the mid 1700s, the British government was taking a more active role in equipping its troops. This was partially to standardize equipment, but also to improve the overall quality, as some colonels supplied sub-standard arms and equipage that was sold to them at cheap prices, and then pocketed the difference between what the government allotted for each item purchased, versus what was actually paid. By the revolution, the Board of Ordnance had taken over the issue of firearms to the soldiers, but the colonels were still responsible to supply swords as needed. Thus Potters local sword cutlery and Loyalist politics made him the perfect source for these weapons. The sabers would not have to be purchased and shipped form England, they could be acquired locally, and since the British occupied New York, there was no problem with delivery of the sabers. Colonel Alexander Innes was appointed the Inspector General of Provincial Forces in America, and it was his responsibility to fill the requests to obtain sword for the regimental colonels that needed, or wanted, to purchase them. Innes kept strict accountings of all of his business dealings, and between January 1778 and December 1781 Innes purchased 1,580 horseman’s sabers (often called “Broad Swords” in the period documents) from James Potter, sword cutler, in Maiden-Lane. A number of entries are noted in the records, with the very first entry (covering January 1, 1779 to September 30, 1779) being for 349 “Swords purchased for Provincial Cavalry” at a total price of 814 Pounds, 6 Shillings & 8 Pence. As Potter’s sword entered the field and became well known and well used, they developed a reputation for being the standard against which all cavalry sabers of the war would be judged. The swords were coveted by the American Patriot forces that fought against the British, and were mentioned by name in period and immediately post-war writings. One of Light Horse Harry Lee’s lieutenants noted that all of Lee’s men were armed with “a Potter’s sword” (no doubt captured from hapless Loyalists), and an identified Potter saber in the collection of the Charleston (SC) Museum was carried by a sergeant who served under Francis Marion. Potter’s swords were so well regarded by the Patriots that a captured Potter saber from the battle of Guilford Courthouse was sent to the Rappahannock Forge to be used as sample, from which cavalry sabers were to be made for the Continental cavalry. With the fall of Yorktown in 1781, and the slow down of hostilities while a final peace was negotiated, James Potter (and many other Loyalists) took their cue and looked to abandon New York before the British troops did. In 1783, Potter, along with a number of other New York Loyalists, relocated to town of Shelburne, Nova Scotia.

James Potter’s cavalry saber was a slightly cruder American made version of what collectors call the British Pattern 1756 Light Dragoon Saber. It had a slightly curved, blade that was approximately 35” in length and about 1 ““ in width at the widest point. The blades are stopped, but unfullered. They have an iron stirrup guard that is pierced four times, two on each side, one above and one below the grip. The grip is grooved hardwood that is covered in thin leather and then wrapped with simple twisted brass wire. The pommel cap is of iron and is large and bulbous. The hilts are typically around 7” in length and the overall length of the swords is usually between 42”-43” The large majority of the known examples are marked POTTER on the reverse ricasso, although a handful of unmarked examples that are unmistakably Potter’s are known. One of the best known of the “unmarked” Potters is in the collection of Don Troiani, and the sword (complete with its rarely encountered scabbard) is identified to Richard Mead of Greenwich, CT, who carried it while fighting the Loyalists in that area.

This example of a James Potter Revolutionary War Horseman’s Saber is one of the scare unmarked swords, that is unmistakably Potter’s work. It is still unknown if the unmarked swords represent his earliest swords (and he did not yet have the marking dies), or if they were simply missed during the assembly process and were never marked. It is generally believed that since Potter did not have the water power at his Maiden-Lane location to operate a trip hammer, which would have been essential to manufacture swords in any quantity, that he was working with imported blades. This would explain the ease with which a handful of blades could slip through without being marked. The saber is in about VERY GOOD ATTICcondition and shows a very thick, dark brown patina over all of the iron surfaces. The saber is about 41” in overall length and the blade is 34 ““ x 1 “. The blade shows some re-profiling and was probably shortened about 1” in the process. This is not uncommon, as Potter swords were so well regarded that some certainly saw service during the War of 1812, and at least one example (which has its blade shortened to 31”) is known to have been recovered from a Confederate Cavalry camp near Richmond, VA. The saber remains in very sturdy, solid condition, but as noted is truly an attic specimen. The metal is deeply oxidized and shows moderate to heavy pitting throughout. The blade has been thinned and re-contoured along the last 12” or so near the tip, to make it more handy and effective. The shortening was done a very long time ago, either during the period of the revolution or immediately there after. The blade edge shows several nicks and dings along the edge, which is simply indication of real combat use. The 6 ““ iron hilt shows the same patina, age, oxidation and pitting as the blade, and remains tight and solid. The pierced iron stirrup shaped guard remains tightly attached and is quite solid, but the center divider of the obverse slots is broken (or rusted through) and the on board juncture and is no longer attached except at the outer juncture of the guard. This is not an issue in terms of strength or stability, but is mentioned for accuracy. The peened, oblong iron pommel cap remains tightly in place and shows no indication of having been disturbed since the period of use. The wooden grip retains what appears to be the large majority of its original leather wrap. The leather is very thin, fragile and dry and has flaked away at a number o war and contact points. The leather wrap is secured by two strand twisted brass wire. While the wire may be original, and certainly shows great age and wear, it is safe to assume that the wire could be a more modern replacement.

While the sword is certainly not mint or fine by any standards, it has a wonderful, completely untouched and unmolested look that is simply wonderful. Potter swords are the ultimate centerpiece to any serious collection of Revolutionary War edged weapons, and even thought hey were produced by a Loyalist sword smith, they saw significant use on both sides during the conflict. The hilt of a Potter is instantly recognizable and these heavy-duty sabers are a classic example of something that is so ugly it is pretty. The plain design and hefty construction are their own simple elegance. If you are only going to own one saber from the American Revolution, than a Potter is the sword to own. This one is reasonably priced and is a great example of a classic early American made fighting sword that has survived more than 230 years to be added to your collection.