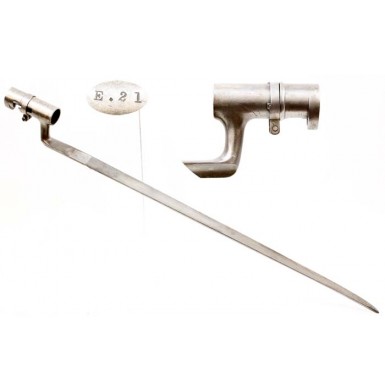 The socket bayonets for the Drake contract M-1841 Mississippi Rifle alterations are one of the more interesting of Civil War era socket bayonets due to its rarity, the relationship it bears to a similar Confederate bayonet and the fact that only two regiments of troops received these bayonets in the field. The State of Massachusetts contracted with the firm of A.J. Drake of Boston to alter 1,742 M-1841 Mississippi Rifles that were in state stores. It appears that all of these guns were produced by Robbins & Lawrence (or possibly their predecessor Robbins, Kendall & Lawrence) of Windsor, VT. The Massachusetts Schedule of Ordnance & Stores Received from the US Government, Purchased by the State and Altered and Repaired during the year ending December 31, 1862 contains the following entry: “1,742 Windsor Rifles fitted for bayonets supplied with sights and put in order.”The guns were unaltered in caliber (retaining their original .54 caliber bores) but had US M-1855 Rifle type rear sights added, along with new front sights that doubled as a lug to accept a socket bayonet. The contract with Drake also called for the inclusion of angular socket bayonets. The same December 31, 1962 report includes the following line item: “1,984 Bayonets, long, for Windsor Rifles, Purchased.” The bayonets were contracted for by Drake from the Bay State Tool Company of Northampton, MA. The Bay State Tool Company had acquired its bayonet making machinery from the English firm of Greenwood & Batley. As a result of being produced on the same machinery, the two types of bayonets produced by the Bay State Tool Company have very similar profiles. The first type is the Massachusetts alteration bayonet manufactured for A.J. Drake. The second type was the first pattern of socket bayonet used on the M-1860 Spencer repeating rifle. Both bayonets have a very sharp angular joint between the blade and the neck of the bayonet, with flutes that extend through the shoulder of the neck to the rear of the blade. While the Drake contract bayonet had a slightly longer blade and a larger socket that would fit the thick barrel of the Mississippi rifle, both have the same distinctive silhouette and profile, making the form instantly recognizable. Interestingly, the Confederate government also purchased bayonet making machinery form Greenwood & Batley and installed it at the CS Armory in Fayetteville, NC. The “Fayetteville” pattern socket bayonets produced there are nearly indistinguishable from the Drake contract at first glance, although there are some minor differences. As a result, Drake bayonets are sometimes unintentionally offered for sale as the rarer and more valuable Fayetteville product. Research indicates that the majority of the A.J. Drake altered Mississippi rifles were issued to the 46th and 51st Massachusetts Volunteer Infantry regiments. Extant examples of Drake altered Mississippi rifles exist with both regimental marks in the bottom of the butt plate. Some of these guns are also marked on the butt plate tang with an alphanumeric mark, such as 61 / C, which appears to be both a rack or issue number as well as a mating number for socket bayonets. Most examples of Drake bayonets have similar alphanumeric marks on the top of their sockets and these marks are one of the key identifiers for this pattern.

This is a VERY FINE condition example of one of these scarce Drake Contract Socket Bayonets. The profile of the bayonet is unique, with a sharp blade to shank joint that is encountered only on CS Fayetteville bayonets, Spanish M-1857 bayonets and a few early Sharps socket bayonets. The bayonet conforms to Reilly’s figure B-82 in American Socket Bayonets & Scabbards with a huge .918 bore diameter, a 3” socket, a 19 7/8” blade and a 27/32” blade width. As is typical with Drake bayonets, there is no US marking on the ricasso, only a an alphanumeric mark that is stamped on the top of the socket between the locking ring and the front of the socket. In this case the bayonet is stamped E . 21. The bayonet shows smooth metal throughout and is free of any pitting. The blade remains full length and is unaltered. Traces of what appears to be old nickel plating are present on the blade and socket, suggesting that this bayonet may have been hung in a G.A.R. Hall after the war, where it was a treasured souvenir of the conflict. Only flecked traces of the nickel remain, and the bayonet has a medium dull pewter gray patina over much of its surface, with some scattered spots of minor age discoloration and light surface oxidation. There is one bright spot of metal forward of the ricasso on the face of the blade where a previous owner had apparently taped a label to the bayonet. Since this area was protected from the air for quite some time, it is brighter and shinier than the rest of the blade, which has dulled somewhat form age. There is also some very minor scattered pinpricking present on the metal. The bayonet blade should easily clean up to nearly excellent, if so desired. The socket retains the original locking ring and screw and they are fully functional. The socket remains perfectly round and shows no damage or deformations that would prevent the bayonet from being mounted on the appropriate rifle. The alphanumeric mark on the socket remains very crisp, clear and legible as well.

Overall this is a very fine and crisp example of a fairly rare socket bayonet with a direct connection to either the 46th or 51st Massachusetts infantry regiments. Rarely can a socket bayonet be so directly linked to the men who utilized it in service. Both regiments spent most of their Civil War service fighting in the Department of North Carolina, fighting at Kinston, Whitehall and Goldsboro during December of 1862 and subsequently doing some additional service with the Army of the Potomac during the Gettysburg Campaign in July of 1863. This fine example of the relatively scarce A.J. Drake Mississippi Rifle alteration socket bayonet would be a great addition to your Civil War bayonet collection. With less than 2,000 manufactured, this bayonet is infinitely rarer than the standard US M-1855 .58 Socket Bayonet, whose production numbers exceeded one million units!