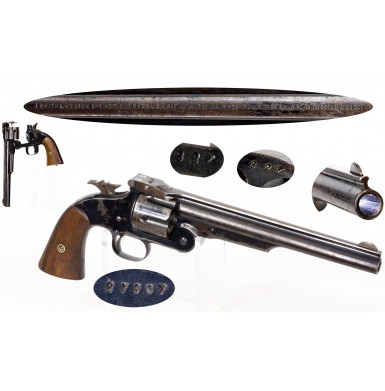 In 1870, Smith & Wesson introduced a new cartridge revolver that would become the basis for at least five other subsequent models, and which would remain in production in one form or another for some four decades. The Model No 3 First Model, which eventually received the moniker “American” was the prototypical large frame Smith & Wesson handgun of the Old West period. The nickname originated to differentiate this variant of the Model #3 from a variant produced in a different caliber that had been adopted as part of a contract for the Russian military. The 1st Model “American” revolver was chambered for the .44 S&W American cartridge, with less than 100 also manufactured in .44 Henry Rim Fire. Initially it was simply called the .44-100 when it was first introduced, but that would have to be differentiated from the “Russian” variant of the .44 cartridge after the foreign contract was signed. The gun was a single action revolver with a six-shot fluted cylinder and a ribbed round barrel that was usually 8-inches in length. The revolver incorporated a number of “firsts” for the company. It was the first centerfire revolver that Smith & Wesson produced. It was also the first .44 caliber handgun for the company, the first “large frame” handgun for Smith & Wesson, and most importantly the first gun to feature a tip down barrel with simultaneous extraction.

Many of the small design changes and improvements for the 2nd Model can be credited to changes requested by the Russian government, who had ordered some 20,000 #3 Revolvers in 1871. The initial order for the Russian contract arms was for all practical purposes a No 3 1st Model American Revolver that was chambered for the slightly more powerful .44 Russian cartridge. The primary differences with these early contract guns was the change from German silver to iron for the pinned front sight, the use of a new interlocking hammer that locked the cylinder latch when it was in the down position and the inclusion of a lanyard ring in the butt. These changes would all become standard on the Model No 3 2ndModel American, which was introduced almost simultaneously. The 2nd Model Americans were produced in a continuation of the 1st Model American serial number range, while the first Russian contract revolvers were serialized in their own range from 1-20,000. After about 3,000 of the Russian contract arms were delivered the Russian requested that the trigger pin be increased in size to increase its strength and all subsequent 2nd Model American and 1st contract Russian Revolvers had this feature. More minor improvements were made to the mechanism as production continued and these improvements were incorporated into both the 2nd Model American and Russian contract revolvers. The Russian military contract guns were produced with blued finishes and with 8” barrels that were roll marked in Cyrillic rather than English. These guns had a double headed Russian Eagle at the right end of the mark and the inspection initials KO on the left side of the. Of those guns 500 were rejected and were resold as commercial revolvers. In most cases the commercial Russian contract revolvers had their original Cyrillic markings ground off and were re-marked with English markings that included the term “Russian Model” to indicate the caliber. The rejected guns were sold along with 4,655 No 3 2nd Model revolvers that were also chambered in .44 Russian that were marked with the English version of the Russian markings. These majority of these commercial revolvers were sold with 8” barrels but were also available with 5 ½”, 6”, 6 ½” and 7” lengths and with a nickel finish in addition to the standard blue. The lanyard swivel in the butt was optional for the commercial guns and those that were not delivered with a swivel has the hole in the butt filled with a screw. Some 20,735 Model No 3, 2nd Model revolvers were produced and these included the 4,655 commercial “1st Model Russians” and 3,014 that were chambered in .44 Henry with the balance of those guns being true “Americans” in .44 American. Today, these scarce early .44 Russian handguns are referred to by collectors as “Old, Old Model Russian” revolvers, to differentiate them from the 2nd contract Russian guns known as “Old Model Russian” revolvers and the later contract guns that were simply “Russian Models”.

Offered here is a FINE condition example of one of the scarce Smith & Wesson Model No 3, 2nd Model “Old, Old Model” Russian Revolvers. The revolver is in the standard configuration with a ribbed 8” barrel, blued finish and smooth walnut two-piece grips. The revolver is serial numbered 27907 on the butt and this same number is stamped inside the right grip panel. The revolver is assembly numbered 327 on the right side of the frame under the grip panel, on the rear face of the cylinder, on the barrel release catch and on rear face of the topstrap. The barrel is roll-stamped in a single line:

As noted, the revolver remains in FINE condition. The revolver retains about 70%+ original blue on the frame, about 30%+ of the blue on the cylinder and roughly 20% on the barrel. Most of the frame blue remains bright and shows the usual high edge wear, thinning and loss from carry and use. The frame also shows two thumbnail sized patches of cleaned surface roughness that has left behind some light pitting and the dull gray color of exposed metal. The cylinder retains the strongest, brightest blue in the flutes with moderate thinning and wear on the balance of its surfaces. The barrel retains some freckles of blue along the sides with most of the surviving blue in the protected areas and recesses along the barrel rib and the ejector housing. The left side of the barrel retains somewhat more bluing than the right and the loss appears to be a combination flaking and holster wear. Overall, the gun retains about 45%+ original blue, averaged across the entire gun. The areas of finish loss have a lightly oxidized grayish patina with some darker discoloration. The metal of the gun remains mostly smooth throughout with only some scattered freckles of surface oxidation and minor pinpricking in the expected areas. The pinpricking and in some cases light pitting is mostly around the face of the cylinder and chambers, around the topstrap and frame around the cylinder gap, along the topstrap and around the muzzle. The bore of the revolver is in about FINE condition as well and remains mostly bright with crisp rifling that shows only some very lightly scattered pinpricking and some oxidation and frosting, which is found primarily in the grooves and is most noticeable near the muzzle. The hammer most of its case coloring, which has faded and dulled somewhat but still retains some very nice vibrant coloring, along with some flecks of minor surface oxidation. The hammer spur retains fine, sharp checkering. The triggerguard had faded to a mostly dark, mottled gray patina with dark blue tinges of color. The trigger retains some of its original blue, with the expected fading and light wear on the face and silvering on the edges and contact points. The screws all retain at least some minor traces of their pale niter blued finish; with some retaining as much as about 20% of their original finish. All of the screw heads are in at least very good condition, with only a couple showing some light to moderate slot wear, and the balance appearing quite crisp and relatively untouched. The original small rear sight is in place on the top of the frame latch, and the original steel blade front sight is correctly pinned into the barrel rib near the muzzle. The revolver is mechanically EXCELLENT and functions correctly in every way. The action performs crisply, and the gun remains extremely tight with flawless indexing and lock up. The automatic extraction system functions smoothly and correctly as well. The revolver locks up very tightly and the frame to barrel fit is excellent with no wobble or looseness. The gun is one that was sold without the lanyard ring and that hole is filled with the correct factory niter blued, domed head screw. The two-piece, oil-finished walnut grips rate about FINE as well. They both are solid and complete with no breaks, cracks, chips or repairs. As noted, the right grip panel is correctly stamp-numbered to the revolver on its interior. The grips show some wear, commensurate with the real-world and use and show the expected scattered bumps, dings, scuffs and mars from handling, carry and use.

Overall, this is a very nice example of a rare Smith & Wesson Model #3 “Old, Old Model” Russian Revolver. These are rare guns with only about 5,000 being produced, including the roughly 500 rejected guns from the first Russian order. These guns do not appear on the market very often, particularly in such nice, complete, and correct condition. This is a great example of the original version of the Smith & Wesson revolver produced in .44 Russian. It is a scarce revolver that is worthy of being a part of an advanced Smith & Wesson collection.