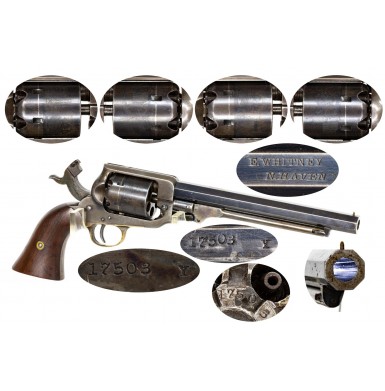 This is a VERY FINE condition example of a scarce US martially sub-inspected Whitney Navy percussion revolver from the American Civil War. The Whitney Navy was a 6-shot, .36 caliber, single action percussion revolver that was manufactured from the late 1850s through the mid-1860s. The revolver went into production after Colt’s patent on his revolver mechanism expired in 1857. The first 1,500 or so (aka “1st Model” Whitney Navy revolvers) were manufactured without a loading lever and were of lighter construction than the later 2nd Model revolvers. Between the Whitney desire to improve upon the guns, and the habit of making design changes when parts on hand ran out, both the 1st and 2nd Models were manufactured in a number of different “types” with a clear pattern of evolution that took place throughout their production.

Some 33,000 Whitney Navy revolvers were produced during their production run, with many seeing US government use. The US Army acquired 10,587 of the revolvers between 1861 and 1864 and the US Navy purchased an additional 6,226 between 1863 and 1865. The state of New Jersey purchased 920 Whitney Navy revolvers in 1863, but 792 of those guns were subsequently resold to the US Army in 1863 and 1864. Those guns are included in the US Army purchases listed above. A number of Whitney Navy revolvers also appear to have been acquired by the South and saw service during the American Civil War. Some were purchased prior to the outbreak of hostilities, and these guns tend to be early production 2nd Model revolvers produced prior to the spring of 1861. A good example is Whitney Navy #3110, which was owned by Confederate cavalry general J.E.B. Stuart, and is now in the collection of the Virginia Historical Society. However, Confederate forces acquired many more Whitney Navy revolvers after the conflict started. These later production guns were no doubt obtained through a combination of capturing weapons and purchasing the guns surreptitiously from secondary retailers rather than directly Whitney. At least two-dozen Whitney Navy revolvers are known to have been repaired for use by the 4th Virginia “Black Horse” Cavalry, and a handful of identified Whitney Navy revolvers with Confederate provenance exist was well. It is not surprising that the revolver found favor on both sides of the Mason-Dixon line, as the robust design with a reinforcing top strap, a solid frame with a screwed-in barrel and the simple turn of a wing nut to release the loading lever and cylinder arbor were all significant improvements over the open top frame and wedge-retained barrel of the Colt design. The popularity of the revolvers in the south is further indicated by the fact that the design was copied by Confederate gunmakers like Spiller & Burr and T.W. Cofer, both of whom produced Whitney-like revolvers for the south.

This Martially Marked Whitney Navy Revolver is serial number 17503 Y and is an early production 2nd Model 4thType. This variant of the Whitney Navy is encountered in the approximate serial number range of 15,000 to 25,000. The primary identifying feature of the 2nd Model 4th Type Navy revolvers were the change in the cylinder roll scene from an eagle, shield and lion to an eagle, shield, lion and naval engagement with “Whitneyville” added in a diagonal banner within the shield. The 4th type revolvers retained the Colt-style, wedge shaped loading lever latch that had been adopted with the 3rd type revolvers, replacing the earlier ball detent catch. The pistol bears the matching serial number 17503 Y on the loading lever, on the bottom of the barrel (concealed by the loading lever), on the cylinder arbor, on the rear face of the cylinder and stamped inside both of the grip panels. This number places the gun in the range of Whitney Navy revolvers issued to the 19th and 21st Pennsylvania Cavalry Regiments. While not listed specifically by number in the serial number books published by the Springfield Research Service, Volume 4 lists these guns that are very close to this one, including #17,489 (14 numbers away) and #17,570 (67 numbers away), both issued to the 19th PA Cavalry, Troops F and K respectively. A very close hit, #17,499 is only 4 numbers away and was issued to Troop D of the 21st PA Cavalry. Another close 21st PA hit is #17,575, which is 72 numbers away. All of these guns were issued during 1864. The SRS books only show Whitney numbers for Troops F and K of the 19th PA Cavalry and Troop D of the 21st PA cavalry so there is a strong possibility that this revolver was issued to one of the troops in either of these regiments during 1864.

The revolver is marked in the usual way, with the top of the 7 ½” octagonal barrel is stamped in two lines:

While the barrel address on these guns is often lightly stamped, this one is quite crisp and clear. The gun is also marked with the small sub-inspection letter H on the left side of the barrel and the left side of the frame at the barrel to frame junction. Interestingly the gun does not have a final inspection cartouche on the grip and the condition of the grips is so fine there is no possibility that it was sanded off or removed. It is not clear if the lack of the cartouche indicates the gun was never accepted for US military service and was then sold commercially, possibly to New Jersey or another state or if the gun was simply missed during the hectic inspection process.

The revolver remains in about VERY FINE condition. The gun retains much of its original blued finish, probably around 50%+ overall. The original bright blue is most plentiful on the barrel and the cylinder. The barrel retains about 80%+ of its blue with some thinning and loss from handling, use and age, along with the usual high edge wear and slivering along the sharp edges of the octagonal barrel. The cylinder retains about 50%+ of its blued finish with thinning and loss, most notably a bright silver turn ring around the cylinder that passes through the cylinder stop slots. There are also some traces of blue on the frame, primarily in the protected areas of the nooks and crannies. The balance of the gun has a mostly smooth bluish-gray patina, particularly on the frame which shows the most finish loss. The metal is almost entirely smooth throughout with no noticeable pitting and only some flecks of pinpricking here and there and some freckled oxidation shot through the blue. The rear of the cylinder shows some light surface oxidation in the cone recesses as would be expected.

Typically, Whitney Navy revolvers retain no cylinder scene, due the fact that scene was often lightly rolled so lightly and then the hard service that these revolvers tended to see. Even Whitney Navy revolvers that did not see hard use typically have weak or practically non-existent scenes due to how lightly they were applied. The cylinder scene on this revolver is extremely fine and is one of the best condition Whitney Navy cylinder scenes that I have encountered. The scene is 90%+ intact and remains extremely crisp and sharp. The close-up photos of the cylinder scene below do not due the crispness and clarity of the scene justice. The loading lever retains strong about 10%-20% of its original case coloring, with most of the lever having dulled to a smoky blue-gray patina with scattered mottling and traces of blue and purple coloration. The most vivid areas of case color are at the knuckle and hinge area of the lever. The gun appears to be 100% complete and correct in every way. The revolver remains extremely crisp and retains strong markings throughout. The action of the revolver is mechanically excellent and the gun times, indexes and locks-up exactly as it should. All of the original cones (nipples) are present, and are in very good, crisp and usable condition. The original cone-tipped brass post front sight is in place at the end of the barrel and is in fine condition as well. The bore is in about FINE condition as well. It is mostly bright, but shows some small, flecked patches of oxidation here and there. The bore retains very crisp 7-groove rifling, but does show some lightly scattered areas of very minor pitting here and there. The original arbor pin retention wing nut is in place and still operates exactly as it should, and even the retaining screw for the wing nut appears to be original to the revolver, although the screw head shows some slot wear. The hammer retains some weak traces of its original case coloring, which has faded to a dark smoky blue-gray color for the most part. The trigger retains about 60%+ original blue. The smaller brass trigger guard, which is correct for this model, has a medium golden patina. The pistol remains extremely crisp throughout with sharp edges on the barrel, and very good screw heads showing minimal slot wear, with the exception of the arbor lock screw previously mentioned. Most of the screws even retain some strong traces of their fire blued finish which has faded and dulled with age. The two-piece oil finished walnut grips are in also in VERY FINEcondition. They are complete and solid with no breaks, cracks or repairs. The grips do show the some of the normally expected minor bumps and dings from handling and use, but even these are very minimal.

Overall this is an extremely crisp and complete example of a US Military Sub-Inspected Whitney Navy 2nd Model 4thType Revolver. This is a 100% complete and correct example of a Whitney Navy that is in tremendously better condition than they are typically encountered. The gun is very attractive, and in person and under normal lighting, it appears to have even more finish than the harsh photographic lights and white background tend to indicate in the photos. The revolver shows the signs of some real world carry and light use but was extremely well cared for. Martially marked Whitney Navy revolvers are fairly scarce, and when encountered usually show very hard use and rarely retain any finish. For a US military purchased and inspected Whitney Navy this is really a very fine example that will be a fantastic addition to your collection of Civil War secondary martial revolvers. It is a gun that I am very sure you will be proud to display in your collection.