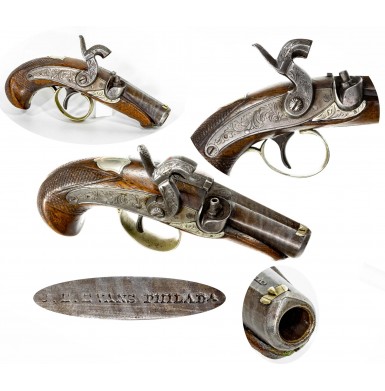 Among most firearms authors and historians, when speaking of guns actually made by Deringer, the gun name is spelled the same as the makers’ name. However, when the term is used generically, it is typically written with a lowercase “D” and two "R"s in the word. While we know that Deringer produced his pocket pistols from the late 1830s through 1868, it is about impossible to tell exactly when a particular gun was made since they are not serial numbered. However, through scholarly research, a general range of production dates has been established based upon various features. The most useful of which is the German Silver trigger guard finial decorations, that have been classified into specific date ranges by scholars. At least seven types of triggerguard finials have been identified and classified, allowing a basic date range of production to be assigned to most of the guns encountered today.

However, it has long been noted that “imitation is the sincerest form of flattery” and few American firearm designs received more flattery during the mid-19th century than Deringer’s single shot percussion pistols. Among Deringer’s imitators were such famous gunmakers such as H.E. Dimick of St. Louis, Franz Bitterlich of Nashville, and Moses Dickson of Louisville, to name just a few. However, it was in Deringer’s home of Philadelphia that the makers of the copycat guns were most prolific. Numerous local makers turned out copies of Deringer’s product, including the shops of Jesse Butterfield, Richard Constable, J.E. Evans, Charles Foehl, JC Grubb, John Krider, Frederick Lins, Robertson, Slotter & Co, and Spang & Wallace, among others. Each of these makers had the marketing advantage of being able to advertise their work as a “Philadelphia Derringer” with few customers necessarily noting the difference between the real Henry Deringer product and the work of his imitators.

Offered here is a VERY FINE condition example of a Peanut Sized Derringer Pistol by Philadelphia gunmaker James E Evans. Evans made derringers are relatively scarce and examples are prized by the collectors who specialize in the diminutive pocket pistols. Information about Evans is scant and even a search of the available Philadelphia newspapers of the period offered little in additional information. Frank Sellers in his seminal work American Gunsmiths lists Evans as working in Philadelphia from 1845 to 1867 with his operation located at 25 North Street in 1850, at 86 South Street in 1855 and 230 South Street from 1860-1865. I had initially assumed that Evans was part of the extended family of Pennsylvania gunsmiths working in the Philadelphia area from the late 1790s through the mid-1880s. However, based upon US Census records it appears that our gunmaker James E Evans was an Irish immigrant who was born on the Emerald Isle sometime around 1815. Evans was noted for producing not only derringer pattern pistols but also high-grade sporting shotguns. An interesting piece from the Philadelphia Inquirer dated 30 November 1865 may indicate why Sellers listed 1865 as the end of Evans’ working dates. The story reads in part:

“DISTRESSING CALAMITY. – About half-past eight o’clock yesterday morning, a frightful explosion of a keg of powder occurred at James E. Evans’ gun store, No. 230 South street, through the striking of a match by the assistant William Branson, a lad nineteen years old. The loud report and great smoke cerate great excitement in the neighborhood….Branson was terribly burned and as it is feared that he suffered from inhaling the flames, his recovery is considered very doubtful. He was removed to the hospital. Should he recover his physicians believe he will be entirely blind. Mr. Evans is burned about the face and hands though not very seriously. The house is a complete wreck. The front wall projects so much that it must be torn down, and the windows shattered.”

It would take some time for Evans to rebuild his shattered shop and home. An announcement published in the same newspaper on 3 February 1866 notes that:

“James E. Evans, Gun Maker, has resumed business at his old stand, No. 230 South Street. Where he will be pleased to see his old patron and the public generally. SPORTING ARTICLES, damaged by the late fire, will be sold at a sacrifice.”

It is not clear when Evans definitively went out of business, but it appears that he died sometime circa 1869-1870.

The Peanut Sized Evans Derringer offered he is a classic example of a Philadelphia Derringer of that pattern. The barrel measures 1.96” from the muzzle to the rear of the breech, making the overall barrel length under 2”, which is the definition of a “Peanut” sized derringer pistol. The barrel measures 1.42” from the muzzle to the face of the breech. The nominally .35 caliber bore is rifled with seven grooves. The diminutive pistol measure 4.75” in overall length and has the traditional back-action percussion lock and bird’s head grip that define the silhouette of the classic Philadelphia derringer. The only marking on the gun are on the top flat of the tapered round barrel and read in a single line:

Like other known examples, the “J” and “E” of the marking are a little weak, suggesting that the die was worn in that area or that the pressure used to apply the mark to a tapered barrel resulted in that latter portion of the mark being struck more deeply. The pistol has the classic Damascus pattern, silver-striped browned barrel with an engraved color casehardened lock and breech. Furniture is of German silver with a small, engraved plate under the bolster, an engraved triggerguard and plate, an engraved side plate and a border line engraved butt plate. A plain shield shaped German silver escutcheon is in the thumb plate position and has not been engraved. The engraving is of the classic flowing feathery scrolls that are commonly encountered on Philadelphia derringers and is well executed and quite crisp. The barrel retains about 80%+ of the thinning silver-striped browned finish on the exposed portion with the loss from fading and some light wear. The bottom of the barrel retains nearly all of the original brown finish, and the bottom of the barrel and breech plug are both stamped with the matching assembly number 7. The bore of the pistol retains crisp rifling and shows moderate oxidation along its length with some areas of light pitting as well. The lock is in FINE mechanical condition and operates correctly on all positions. The lock retains crisp engraving, but the case colors have faded and dulled to a smoky gray patina. The hammer is engraved en-suite, matching the lock. The original small fixed-notch rear sight remains in place on the top of the breech and the original dovetailed German silver front sight blade remains in place on the top of the barrel near the muzzle. The walnut stock has a checkered bird’s head grip and a Schnabel forend and remains in FINE condition as well. The stock is solid and full-length and is free of any breaks or repairs. The stock retains fairly crisp checkering with some light wear and minor dulling of the sharp points but shows no signs of being sanded. The wood shows some light handling marks with the only condition issue worth noting being a tiny grain crack running from the lock mounting screw to the barrel channel, the result of the lock screw being overtightened. This is not an uncommon issue with percussion guns. The pistol remains in really lovely condition and is quite crisp and is in a wonderful state of preservation.

Overall, this is a fantastic example of a Peanut Sized Philadelphia Derringer by one of the less common Deringer imitator, J.E. Evans. This pistol was formerly part of the famous gun collection of the late Owsley Brown Frazier and was part of the collection of the Frazier Historical Arms Museum in Louisville, KY, which is now the Frazier History Museum. The gun was incorporated in their themed display “A Well-Armed Gentleman – 1849”. The pistol is accompanied by some paperwork from the museum, including an appraisal from the late R.L. Wilson, dated 9 November 2000 that values the pistol at $6,000. This would be a wonderful addition to any advanced Derringer collection and is a really lovely example that I know you will be proud to display.