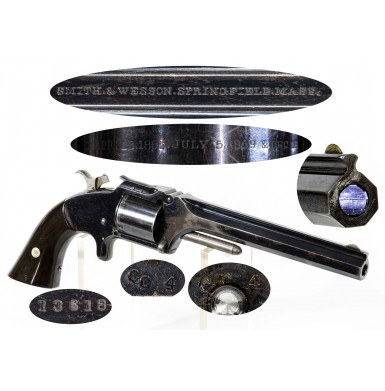 This is a VERY FINE example of one of the most popular metallic cartridge revolvers of the American Civil War period. The Smith & Wesson No 2 Old Army revolver was a six shot, .32 caliber single action revolver that fired a .32 caliber rimfire cartridge. The revolver was introduced in 1861 and remained in production until 1874. During that time some 77,155 of the revolvers were manufactured. Those pistols under serial number 35,731 were produced prior to 1 May 1865 and are considered revolvers that may have seen some degree of Civil War use.

The pistol used Smith & Wesson’s “tip up” action that they introduced with the .22 caliber No 1 Revolver. Like the No 1, it used a single action mechanism that was fired wth a sheathed spur trigger without a triggerguard. To load or unload the pistol the release at the bottom of the frame was pushed, allowing the barrel to be tipped up and the cylinder removed. Pushing the chambers over the fixed ejector rod under the barrel removed the empty cartridges, allowing fresh cartridges to be dropped into the chambers. The revolvers were produced with ribbed octagonal barrels that were available in the standard lengths of 4”, 5” and 6” with 4” examples being quite scarce. Other lengths were produced as well, such as 8” and 10” but these are extremely rare. The standard finish for the revolvers was blue overall with some small parts color casehardened, like the hammer, trigger, and ejector rod. Later in production nickel plated finishes became available as an option. Another scarce factory finish was the “half plate”, with a blued barrel and cylinder and a silverplated frame. Other custom ordered finishes included fully silver plates and with Standard grips were smooth varnished two-piece rosewood, but higher-grade grips made from ivory and other exotic materials were available on a custom order basis as well.

These guns were very popular personal side arms for soldiers and officers on both sides during the conflict. Smith & Wesson No 2 pistols were known to be owned and used by such diverse and historic figures such as Brevet General George Armstrong Custer and the infamous lawman “Wild Bill” Hickok. Period images regularly show soldiers with an “Old Army” revolver stuck in their belt. From the standpoint of size, weight, and cartridge power, the Smith & Wesson No 2 was probably one of the most practical pistols for company grade officers to carry in the field. It was lighter and easier to deal with than a Colt Navy or Colt Army percussion revolver and was more powerful than the popular .22 rimfire pocket pistols of the era.

This Smith & Wesson No 2 is serial number 13618, which places its production in the middle of 1863, right at the height of the American Civil War. The serial numbers for Smith & Wesson No 2 revolvers produced in 1863 run from 10,512 through 15,859, with a production of 5,347 guns that year. The serial number is very clearly stamped in the bottom of the grip frame and is also stamped inside of the right grip panel. The gun is mechanically excellent with a crisp action and a very tight lock up. The gun times and indexes exactly as it should. Typically, these “tip up” revolvers are found with excessive play in the hinge between the barrel and frame and they tend to wiggle. This one is nice and tight. The top of the barrel rib is clearly marked in a single line with the typical Smith & Wesson information:

The 3 April 1855 date referred to the Rollin White patent for the bored through cylinder. The July 5th date referred to Smith & Wesson’s patent for an improvement to the frame design of their earlier No 1 revolvers. This allowed larger caliber rimfire ammunition to be used more reliably. The December 18th patent described in detail the revolver that would become known as the “No. 2”.

This gun has the highly desirable 6” ribbed barrel, considered the favorite barrel length for those soldiers who carried an “Old Army” in the field. The pistols produced with 5” barrels are the most common, and the 6” guns are the second most often encountered. The gun has the matching alphanumeric assembly number CC4 stamped on the left grip frame under the grip panel, on the face of the cylinder and on rear face of the barrel web, below the forcing cone. As noted, the gun is in about VERY FINE condition. It retains about 85%+ of its original rich blued finish overall. The finish is deepest on the frame, which retains about 93%+ of the blue, with the barrel showing more wear and loss, rating about 70%. The cylinder retains about 90%+ of its blue. The revolver shows the expected finish thinning, fading and wear from carry and use, as would be expected. The most obvious loss is high edge loss along the octagonal barrel and fading and wear along the sides of the barrel web where it meets the frame, high edge wear and a turn ring on the cylinder and some minor thinning and fading on the backstrap and gripstrap. The areas where the blue has faded and worn has developed a pewter gray patina. The metal is almost entirely smooth, with only some very minor freckled aeras of light pinpricking here and there. This is most noticeable around the face and rear of the cylinder, on the muzzle of the revolver and a couple of small areas on the lower sides of the barrel web, in front of the cylinder chamber mouths. The only area of pitting is a tiny patch on the lower right side of the frame, immediately behind the cylinder. The color casehardened small parts have faded to a mostly silvery gray patina, with only some minute traces of color remaining on the ejector rod and the trigger. The bore of the pistol is in about VERY FINE condition. The bore is almost entirely bright with some freckled patches of darker oxidized discoloration.  The rifling remains very crisp with some very lightly scattered pitting here and there along its entire length. The gun retains extremely sharp edges along the octagonal barrel, and the original German silver sight blade remains in place at the end of the barrel. The rosewood grips are original to the gun and are in about VERY FINE+ condition as well. They retain about 90%+ of their original varnish. The grips are free of any breaks, cracks, or repairs. The grips do show a few minute dings and handling, marks along the sharp edge at the lower periphery of the grip. Overall, the grips remain extremely crisp. They retain excellent, sharp edges, and they are very attractive, matching the revolver’s condition perfectly.

Overall, this is a really great example of one of the most popular Civil War era personal side arms. The gun is 100% complete, correct, and original, and it functions perfectly. This gun represented the first truly successful, mass-produced American cartridge pistol that was chambered in a reliable caliber that could actually be called a somewhat “effective” combat or self-defense cartridge. All previously successful metallic American cartridge revolvers had been chambered in the anemic .22 RF short or in some strange patent cartridge that was expensive, unreliable, and difficult to obtain. The Smith & Wesson No 2 was a breakthrough revolver in these respects and is one that no Civil War handgun collection is complete without. This is a really exceptional example that will be a wonderful addition to your collection of Civil War era secondary martial revolvers.