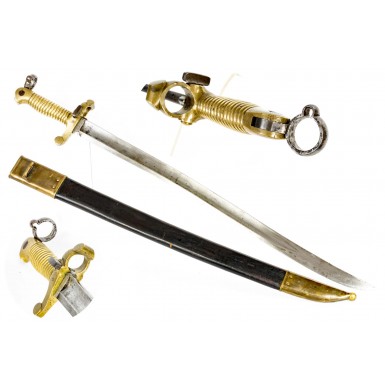 This is a really lovely example of one of the rarer US saber bayonets of the Antebellum period, the US Model 1841 Type I Saber Bayonet, often called “Ring Bayonets” by the Ordnance Department during the period and better known to collectors and historian as the Snell Bayonet. This style of bayonet is illustrated in the classic bayonet reference books as #67 - Hardin, #976 – Kiseling Volume IV and #2 page 206 – Janzen. These bayonets were manufactured for use on the 1,631 US Model 1841 “Mississippi” Rifles that were altered in the spring of 1855 at the Harpers Ferry arsenal to accept the new .58 Minié bullet ammunition. Harpers Ferry master armorer James H Burton had developed the ammunition. These rifles were further modified by the addition of a screw-adjustable, Benton pattern folding rear sight that allowed increased accuracy at longer ranges, out to about 600 yards. The rifles that had these sights installed were modified to accept a saber bayonet by adding a cut near the muzzle for the bayonet to lock into. The bayonet was manufactured with a folding muzzle ring that passed over the front sight and eliminated the need for a lug to be attached to the rifle. This simple modification was abandoned on the second set of rifles modified in 1855. These rifles received a more conventional long-base, long-range rear sight and were fitted with a traditional saber bayonet lug on the barrel. The 1,631 rifles so altered also had their forends slightly shortened and the front barrel band shortened as well to accept the more traditional saber bayonet.

As only about 1,650 of these Snell Pattern bayonets were produced, they are rather rare today and are quite desirable for collectors today. When they are encountered, they are inevitably missing the folding iron muzzle ring that was mounted at the rear of the brass grip. However, this bayonet remains in 100% complete condition, is all original and all of the associated mechanisms in the bayonet function perfectly. The bayonet measures 27 ¼” in overall length, with a 22 7/16” blade and a 4 13/16” hilt. The blade is 1 ¼” wide at the ricasso and has a 16 ½” stopped fuller. The flat spine measures .38” thick at the ricasso. The blade to hilt junction is reinforced with a Collins & Company style steel pin through the guard. The brass grip has 15 cast ribs and the muzzle ring has an internal diameter of .898”. The top of the muzzle ring has a “cocks comb” quillon, a typical feature of US arsenal produced saber bayonets and a feature missing from contractor produced saber bayonets of the period. The original folding muzzle ring is present at the pommel of the bayonet. It has an internal diameter of .92” and a small area relieved to allow the rifle’s front sight to pass through it. The folding muzzle ring works exactly as it should, with the original spring loaded lock stud still in place and fully functional. The ring has a lightly oxidized grayish-brown patina with freckled discoloration and some lightly scattered minor surface roughness. This same patina is present on the balance of the iron parts, with the exception of the blade, which shows slightly less oxidation and discoloration. The spring-loaded muzzle locking mechanism within the brass muzzle ring works as it should and the rotating latch functions perfectly. The brass guard and grip have a lovely, untouched golden mustard patina with some darker discoloration in the recesses of the grip. The full-length, semi-Yataghan blade has a medium steel gray patina with some areas of darker age staining freckled oxidation. There are a few small patches of very minor surface roughness and some flecks of pinpricking here and there. The balance of the blade is mostly smooth. The bayonet retains its original scabbard, a US Pattern 1855 Saber Bayonet Scabbard for use with the US M1855 Rifleman’s Belt and Accouterments. The US arsenal Mississippi Rifle alteration saber bayonets were issued with 1855 pattern scabbards, as the blades of all of the various Harpers Ferry 1841 Rifle alteration saber bayonets and the M1855 bayonet were the same. The scabbard is full-length and in about FINE condition with strong, crisp leather with good edges and nearly all of the original finish in place. The scabbard exhibits some very small areas of minor of finish loss and some lightly scuffed wear with some minor marks here and there. The rear seam stitching is in wonderful, fine and tight condition. The original brass throat and drag are present and in FINE condition as well, both exhibiting an untouched bronze patina. The throat and drag show some very minor dings and dents, typical of wear and use. The throat is in nice condition and retains the original strap bar that the frog-retaining strap would pass through.

Overall this is really a really FINE condition specimen of a scarce US saber bayonet. When these bayonets are available for sale it is not uncommon form them to be priced in the $1,500+ range, with a scabbard, and often without the iron muzzle ring! This example is 100% complete and original and in great condition for display. It includes a nice original scabbard and all for a price much lower than many dealers are charging for an incomplete bayonet with no scabbard at all. All in all, this is a great displaying Snell bayonet at a very attractive price.