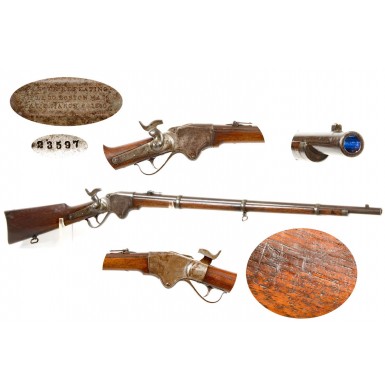 There is probably no one weapon of the American Civil War is more representative of the overwhelming force of industry and technology brought to bear by the North against the South than the US Model 1860 series of repeating rifles and carbines that are more commonly known simply by the last name of their inventor: Christopher Spencer. Even though the standard cavalry long arm technology of the pre-Civil War era US military, the single-shot breech-loading percussion carbine, was still in heavy use through the closing days of the war, the era of the repeating metallic cartridge used in rifles and carbines was firmly established by the end of 1863. The “Horizontal Shot Tower”, as some affectionately referred to the Spencer Rifle (and carbine), was in essence the original assault rifle. Although the Henry Rifle offered more cartridges in the magazine, the .44RF Henry round was essentially the ballistic equal to a pistol cartridge. The .52 caliber 56-56 Rim Fire Spencer cartridge was much more comparable to a real service rifle load and delivered far greater downrange stopping power. The Spencer was also very fast to reload, with a 7-round tubular magazine that fed through the buttstock; soldiers could carry pre-loaded tubes and reload the magazine in just a few seconds. While the Spencer shooter did have to manually cock the hammer for each shot (the Henry had a speed advantage here, since the toggle action that operated the bolt to eject the old cartridge and load a new one also cocked the hammer), the robust design and relatively powerful cartridge combined to make it the most prized and most feared long arm of the American Civil War. 11,470 Spencer military rifles were delivered to the US military between 1863 and 1865, and nearly five times that many carbines saw service as well. The rifles were produced in two fairly specific serial number ranges, with the early order being found in the 700 to 11,000 range and a later order found mostly in the 22,000 to 24,000 range. A handful of rifles were intermixed in the serial number ranges of the carbines, but the large majority of rifles extant exist in these two specific serial number production ranges.

The 30” barreled, “3 band” rifle was designed to take a US angular socket bayonet that was almost identical to the standard US M1855 socket bayonet, although it had a slightly larger socket diameter, a taller bridge to accommodate the front sight, and was unmarked with the exception of a small inspector’s mark forward of the mortise cut or on the neck of the bayonet. The rifles were the first of the Spencer repeaters ordered by the Ordnance Department and were the first Spencers to see service in the field. While no Spencer carbines were in the field at the time of the battle of Gettysburg (July 1-3, 1863), the 5th Michigan cavalry (part of Custer’s brigade) was armed with the Spencer “Army” rifle and used them very effectively on July 3 against General J.E.B. Stuart’s cavalry. Spencer rifles with serial numbers below approximately 1550 have the potential of being among the guns issued to the 5th Michigan Cavalry in time for use at that battle. Spencer rifles also saw significant service in the Western Theater, most notably in the hands of Colonel Wilder’s Lighting Brigade of mounted infantry, consisting of the 17th& 72ndIndiana, and the 98th& 123rdIllinois. Wilder initially tried to obtain Henry rifles for his mounted infantrymen but found that an order for 900 was more than could be manufactured by the fledgling New Haven Arms Company. At about this time, Christopher Spencer himself had undertaken the roll of company spokesperson and travelling salesman and was visiting the camps and commanders of the Union Army in the Western Theater. Spencer greatly impressed Union General William Rosecrans, who immediately requisitioned some 2,000 of the rifles from Chief of Ordnance James Ripley. Another commander who was impressed by Spencer and his rifle was Colonel John T. Wilder. In fact, Wilder was so impressed with Spencer and his rifle design that the colonel personally arranged financing to purchase enough Spencers rifles to outfit his entire brigade and allowed the men to purchase their own rifles on credit, with the cost of the guns deducted from their pay over time. The initial order was for some 1,400 rifles, at a per unit price of $35 each. Wilder’s confidence in the weapon was well founded, but his willingness to risk financial ruin by personally guaranteeing the loan of nearly $50,000 to purchase the weapons (roughly one million dollars today just in terms of inflation) truly underlines how confident he was in their success. Wilder’s men first put their new repeating rifles to good use at the Battle of Hoover’s Gap during the Tullahoma Campaign in early summer of 1863 and provided massive supporting fire during the Battle of Chickamauga that helped to save the Union Army from potential destruction during heavy fighting on the first day. Many of the early Spencer Rifle purchases were made by states, or private individuals like Wilder, and as such, these arms did not have government sub-inspection and inspection marks or cartouches, as those arms that were directly contracted for by the US Ordnance Department did. In addition to Wilder’s Brigade and Custer’s 5thMichigan Wolverines, the Spencer Rifle saw use with a large number of both cavalry and infantry regiments. These included the 2ndand 6ththrough 10thMichigan Cavalry, the 5th& 7thNew York Cavalry the 8thIndiana and 11thKentucky Cavalry and the 2nd& 4thMassachusetts Cavalry and the 11thOhio and 1stVirginia (US) Cavalry. US infantry regiments that were at least partially arms with Spencer Rifles included the 7thConnecticut, 1stDelaware, 9th, 27th, 92nd, 98th, 102ndand 123rdIllinois, the 13th, 17th, 20th, 40thand 97thIndiana, the 4th& 28thKentucky, the 37th, 54th& 57thMassachusetts, the 14th, 24thand 27thMichigan, the 3rdand 10thNew Hampshire, the 65th, 79th, 118thand 148thNew York, the 46th, 75thand 79thOhio, as well as the 5ththrough 8thCompanies of Independent Ohio Sharpshooters, the 105th, 148thand 190thPennsylvania and the 37thUS Colored Troops.

This is a VERY GOOD+ condition example of a US Ordnance Department contract Model 1860 Spencer Army Rifle. The gun is in complete and 100% original condition. The gun is in its original Civil War configuration and has none of the post war modifications or alteration that were made to some of the Spencer rifles in the latter part of the 1860s. The action works perfectly, with the lever cycling the action smoothly and the extractor working exactly as it should. The hammer cocks as it should and responds to the trigger crisply. The original magazine tube is present and in fine, fully functional condition. It is the correct Civil War era style with a smooth base plate, not the Indian War era grooved base plate version that is more common and often found as a replacement in Civil War era guns. The magazine tube in in fine condition, both physically and mechanically. The gun retains both of its original sling swivels, including the one in the lower toe of the buttstock and the one on the middle barrel band. The original rear sight is in place and is complete and is fully functional. The original front sight, complete with the brass blade insert, is present at the end of the 30” barrel. The gun retains relatively clear, mostly legible markings on the receiver, the top of which is marked in three lines:

The serial number 23597 is stamped into the rear of the upper receiver, at the wrist, in front of the buttstock joint, and the matching number is present under the barrel, forward of the receiver, hidden by the forend. This number places the gun in the second major production batch of US military Spencer rifles. A search of the Springfield Research Services serial number books did not find this rifle, but that is not uncommon as those records are far from complete. The gun retains two very legible cartouches on the reverse wrist. The first is a script MMJ stamped vertically and the second is a script DAP, stamped horizontally. Both are contained in rectangular boxes with rounded corners. The first set of initials are those of contract arms sub-inspector Martin MacNary Johnson, who primarily inspected arms in Hartford, CT made by Spencer and Colt. The second set of initials are those of Dwight A. Perkins, a former Colt employee who went to work as a civilian arms inspector at Springfield Arsenal and would also inspect arms from the Hartford manufacturers Colt and Spencer.

As noted, the rifle is in about VERY GOOD+ overall condition. The gun retains none of its original finish on the exterior metal, but the barrel retains roughly 90% of the original blue, underneath where it was protected by the forend. The barrel has a mostly smooth plum brown patina that is mixed with some scattered areas of minor surface oxidation and a few small spots of minor corrosion and surface roughness, mostly near the muzzle. The case-hardened receiver retains none of the case hardening, but again has a moderately oxidized and somewhat mottled brownish gray patina. The receiver is mostly smooth, with some areas of minor surface roughness and corrosion, and some light pitting that is primarily located along the top of the receiver. The hammer has a similarly oxidized patina, matching the receiver well. The interior of the block retains some very minor traces of case colors and has a mostly smoky gray patina. The buttplate also has a muted, lightly oxidized patina with no color present. The bore retains crisp 6-groove rifling, remains quite bright and rates about FINE overall. The bore shows some very lightly scattered pitting along its length, but nothing major, with most of the minor erosion in the last few inches nearest the muzzle. The overall bore condition matches the outside of the gun very closely. The stock and forend are in about VERY GOOD condition as well. Both retain a nice, open grained appearance but without any feathery texture. Both the buttstock and forend are in solid condition and are free of any breaks or repairs. Even the usually encountered crack in the butt, along the channel of the magazine tube, is missing. This area is notoriously weak as the wood of the butt is so thin where the channel of the magazine was hollowed out. A prominent grain line is present along the magazine tube on the obverse, which almost appears to be a tight crack in the photos, but this is really an optical illusion. The butt and forend do show numerous bumps, dings and mars from handling and use in the field, which is to be expected. The butt shows a couple of slightly deeper mars and scrapes on both sides, near the buttplate tang area. Despite the clear evidence of real world use, both pieces of wood remain fairly crisp and show no signs of having been sanded or refinished. The wood is really in nice condition for a Spencer rifle, as the both pieces of wood have areas that are notoriously thin and prone to damage and easy breakage.

The overall condition of this Spencer rifle is really very nice, especially for a gun that was produced fairly early in the war and likely saw significant field service during the last half of the Civil War. The gun is complete, and all original and is a very reasonably priced for such an attractive example of a very important, martially marked Civil War weapon. Significantly fewer Spencer rifles were produced than the carbines, and their association with Custer’s cavalry and Wilder’s famous Lightning Brigade make them extremely desirable collector’s items. If you have always wanted a really nice Spencer rifle with a very good pair of nice cartouches for your collection, this would be a good choice, as it is a lot of gun for the money.