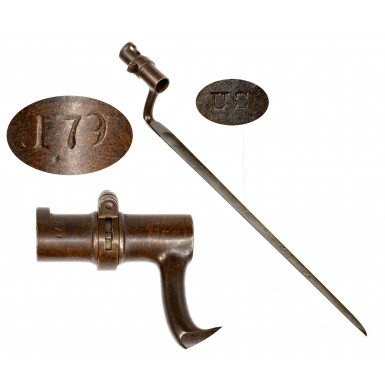 This is really nice example of a rather scarce US socket bayonet. The US Model 1851 Cadet Musket Socket Bayonet was produced between 1851 and 1853 in rather limited quantities, with only about 4,000 being produced. As with the muskets, the bayonets were issued with, the initial 300 or so were sent to the Virginia Military Institute (VMI) and the balance were retained at the US Arsenal at Springfield, MA. Eventually a number of the bayonets were issued with the rifled and sighted M1851 Cadet muskets that were sent to the US Military Academy at West Point and the balance of the bayonets eventually saw use at other military schools, with roughly half of the guns and bayonets going to military academies south of the Mason-Dixon Line and the rest going to those above the north-south dividing line.

This pattern of socket bayonet is illustrated and discussed in Robert Reilly’s seminal work American Socket Bayonets & Scabbards as Figure B88. The bayonet is unique in many ways, when compared to other US socket bayonets of the period. The overall size of the bayonet is reduced when compared to the standard US M1835 .69 bayonet of the period, as well as the M1855 .58 socket bayonet, which it closely resembles. The bayonet has the M1855 style blade with tapered shoulders, rather than the sharp shoulders associated with US produced socket bayonet from 1795 through the end of the smoothbore musket era. However, this diminutive blade is only 14 9/16” in length, rather the usual 18” of full-sized musket bayonets and the blade is only ¾” wide, unlike the 1855 bayonet with its 11/16” wide blade. The M1851 Cadet Bayonet has a .720” bore diameter and 2 11/16” long socket. One of the truly unique features of the bayonet is the locking ring, which is slotted and has the stop pin contained within it, instead of the use of an eccentric ring that has a shoulder that presses against the stop pin. The other unique feature regarding the locking ring is that it is retained by two opposing shoulders instead of the usual system of a shoulder on one site and the stop pin on the other side. The bayonet is clearly marked US on the face of the blade at the ricasso but does not bear any other marks or rack numbers. The die that struck the “US” was clearly damaged as the bottom portion of the “S” is missing, but there is no indication that it was ever there at all. There is also a rack number on the rear portion of the obverse socket, which reads 179. This type of numbering is rarely encountered on these bayonets and is consistent with the inventory numbering applied to the rear barrel bands of the rifled and sighted US M1851 Cadet Muskets that were delivered to West Point for the use of the cadets between 1856 and 1858. A total of 323 of the modified rifled and sighted M1851s were sent to West Point, with the guns being inventory numbered sequentially on the rear barrel band and also being rack numbered with a two line alphanumeric mark on the buttplate. The numbering on the socket of this bayonet indicates West Point use, making it one of the roughly 323 bayonets (not counting replacements) that were issued to the Corps of Cadets at the US Military Academy.

The bayonet is in about NEAR FINE condition overall. The bayonet is complete, full-length and the original locking ring and tension screw are present, and they function exactly as they should. The bayonet has a mostly smooth, heavily oxidized patina over all of the metal surfaces. The metal is mostly smooth with a small patch of light pitting on the face of the blade that is about 3 ½” long, located about 3 ½” from the tip. The bayonet has a really attractive, untouched look and has great displayability.

Overall this is one of the rarer US socket bayonets of the American Civil War era. This one is in  very nice, untouched and uncleaned condition and would be a great addition to your bayonet collection or as a compliment to your US M1851 Cadet Musket, particularly for a West Point numbered rifled and sighted example. I rarely see more than a couple of M1851 bayonets available for sale during any given year, and it has been quite some time since I have had one of the very scarce inventory numbered West Point examples. Don’t let this one get away, particularly if you happen to have the Rifled & Sighted M1851 numbered 179 on its rear barrel band!