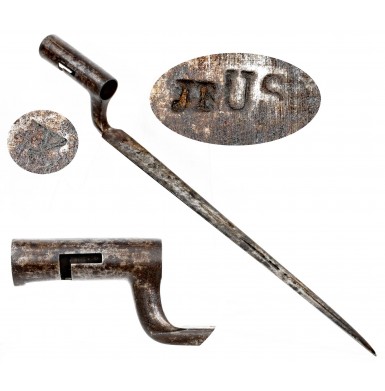 This is a VERY GOOD+ condition example of the US Model 1810 Socket Bayonet, as produced at the National Armories at Springfield and Harpers Ferry from about 1810 through about 1815. The M1810 socket bayonet incorporated two specific improvements over the bayonets that had been manufactured in the preceding years (1807-1809). These were an increase in the neck diameter to at least .435” in order to strengthen the bayonet in that location, and an increase in the length of the socket to improve the fit and security of the bayonet when fixed to the musket. The previous pattern of 1807 had included the somewhat revolutionary improvement of a bridge across the mortise cut at the rear of the socket to strengthen the socket at that location, and the bridge remained a feature of the M1810 bayonet, although it was now almost always integral with the socket and not separately applied.

The new bayonet was produced at both Springfield and Harper’s Ferry and had a nominally 3.4” long socket with a blade that varied between 14 ½” and 15 ½” in length and was slightly over 1” in width (normally 1.04” to 1.08”). The blade incorporated a narrow, rudimentary face flute, normally about 7” in length, with variances as much as 1 inch noted. The socket was mortised for a top stud, with a simple 3-step, L-shaped cut and a nominally 1.44” muzzle to stud distance. The nominal muzzle diameter varied between .870” and .880”. The shank had a flat face, and the blade was marked “US” and was usually preceded by the initials of the bayonet forger, which were typically smaller than the “US” mark. A single mating mark was typically struck on the socket, forward of the mortise cut, to mate the bayonet to the gun it had been fit to. A matching mating mark was struck on the top of the matching musket’s bayonet lug. These dimensions specifically refer to bayonets produced in the 1810-1814 era for use with the current production muskets. However, even more “replacement” bayonets were produced during this same time frame. These generally conformed to the above dimensions, but often had slightly different socket dimensions, which were necessary to fit them to guns that were manufactured earlier than 1810. In fact, the Ordnance Department was constantly ordering new production bayonets to replace the bayonets from older muskets that were lost or damaged. During 1813 (at the height of the War of 1812), this reached a crisis level as thousands of repaired and refurbished muskets were sitting idly in arsenals for lack of bayonets. As such, it is often difficult to determine exactly which pattern of musket a given 1810 pattern bayonet was actually intended to fit, if the socket dimensions are outside the norm for current production muskets during the 1810-1814 era.

This US Model 1810 Socket Bayonet is in VERY GOOD+ condition and is very well marked. The ricasso is clearly and deeply marked JB US, with the “JB” being slightly more than half the size of the “US”. The initials “JB” represent the name of the bayonet forger at Springfield who produced the socket bayonet. However, the research of author Peter Schmidt, published in U.S. Military Flintlock Muskets and their Bayonets - The Early Years 1790-1815 indicates that several Springfield employees had those initials, making a definitive identification impossible. The bayonet is also marked with the letter A, sideways forward of the mortise cut. As noted, this was a mating mark to match the bayonet to the musket that it had been fit to.

The bayonet measurements are as follows:

These measurements essentially confirm that this bayonet was produced for use on a US Springfield arsenal produced musket circa 1810-1815.

The bayonet has a moderately oxidized mottled gray and brown patina with scattered patches of oxidized surface roughness. The blade is free of any significant pitting, with only some scattered pinpricking and the previously noted scattered surface roughness noted. The socket has a slightly deeper, darker mottled brown patina, with a dull pewter color underneath. The socket shows some scattered, oxidized surface roughness much like the bayonet blade, but it is thicker and more plentiful on the socket. As mentioned, the capital letter A is stamped sideways on the socket, forward of the mortise cut, to serve as a mating mark for the bayonet, to match it to the musket it was fit to. The bayonet shows some scattered dings and impact marks, which is typical of socket bayonets that saw any service and use.

Overall this is a very nice, solid example of a Federal Era US socket bayonet, almost certainly made at Springfield Arsenal circa 1810-1815. The bayonet has a nice look and is quite attractive and is very well marked. It would be the perfect companion to your US Model 1795 Type III Springfield musket, or as an addition to any early American bayonet collection. This is a nice War of 1812 era bayonet that you will certainly be glad to add to your collection and in much better condition than these bayonets are usually encountered.