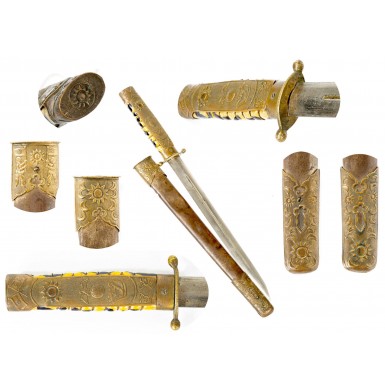 When thinking about World War II era daggers, most collectors immediately think of the seemingly endless variety of daggers of utilized by Nazi Germany. These daggers saw use not only with military personnel but with party members and officials, governmental employees and with any variety of para-military organizations and civil service occupations. The daggers were of such a wide variety of patterns and styles that their very presence on a person’s belt could convey the organization to which the wearer belonged, as well as their position within that hierarchy. Many other WWII combatant countries also used daggers as badges to indicate membership in various organizations and in some cases rank as well.

The Kuomintang was a Chinese political party that ruled China from 1927 to 1948, when the remnants of the Chinese Nationalist, under Chiang Kai-shek escaped to the island Taiwan, where they established the modern Republic of China. Once Chiang Kai-shek left the mainland, there was no longer any major, organized resistance to Communist Chinese Party under Mao Zedong. Interestingly, Mao had been another major Chinese warlord who was supported by Soviet Russia during the Second World War. Although opposed to the nationalist Chinese party and their government, the ancient Sun-Tzu mantra “The enemy of my enemy is my friend,” applied in this case, thus Chiang Kai-shek and his Republic of China army was supported by Mao and communists in the fight against the invading Japanese during the Second Sino-Japanese War of 1937-1945.

The name Kuomintang translates as "China's National People's Party" and was historically referred to as the Chinese Nationalists. The Party was initially founded on August 25, 1912, by Sun Yat-sen but dissolved in November 1913. It was reestablished on October 10, 1919, again led by Sun Yat-sen, and became the ruling party in China. After Sun's death, the party was dominated from 1927 to 1975 by Chiang Kai-shek. During the Chiang Kai-shek period, the use of various ornamental daggers by military and party members became common. This may have been a way of modeling Germany, which had helped to rebuild the Chinese military in the years immediately prior to the outbreak of World War II. As the world  powers had tried to do for more than two-hundred years, they vied for positions of power within China in an attempt to gain an advantage within China to control trade, and potentially the country. To this end, Russia, Germany and the United States all provided help, advisors and economic and military support to the Chinese, as did many of the other European powers.

The giving of daggers by the Kuomintang may have originated with Chiang Kai-shek himself. He had been the first commandant of the Whampoa Military Academy, the Nationalist Party of China’s Army Officer Academy. The commandant would present each graduate with a dress dagger at the graduation ceremony. These daggers were often inscribed to the recipient and were of the highest quality. During the World War II period the daggers were issued to a wider variety of officers, and likely Kuomintang party official as well. Although there is very little information about the Nationalist Chinese Daggers of this period, there are several known varieties. The highest grade, army officer daggers appear to be from the 1920s and 1930s and are likely the military academy presentation daggers. During the period of the Second Sino-Japanese War of 1937-1945, several other patterns appeared, including one that is attributed to pilots that incorporates a bird of prey into the hilt design. Other examples are known with varying hilt and decorative designs that are all generally referred to as “Army Officer’s Daggers” but may have different meanings that have not yet been identified in English language literature on daggers and fighting knives. As most examples include Kuomintang symbols, like the Blue Sky and White Star that is incorporated into the canton of the Republic of China’s flag, these daggers became contraband in Communist China after the defeat of Chiang Kai-shek and his nationalist by Mao Zedong. The result was the hiding of many of these daggers by their owners, as well as the general collection and destruction of the daggers by communists. As a result, all Kuomintang Nationalist Chinese Daggers are rather scarce, no matter the quality, style or condition.

The dagger takes its form from the classic Chinese straight-blade, double-edged, spear point sword that can be traced back some 2,500 years in Chinese history. The 9.75” blade is .885” wide and is of nickel plated steel with a 6.5” narrow central fuller. In keeping with the dress use of the dagger, the edges are not sharpened, although the point is relatively sharp and would certainly penetrate an opponent with little effort. The dagger has an overall length of 14.625” with a 4.85” hilt. The hilt is of brass with a 2.15” wide guard with small lobe shaped quillons at the ends. The grip has a semi-oval shape with grooved wooden grip panels that are covered with a faux tortoise shell cover and eight wraps of twisted brass wire. The grip is encased with a decorative sheet brass covering, which exposes the faux tortoise shell along the edges and that is decorated with the embossed motifs discussed above. The dagger is accompanied by its original sheet steel scabbard with cast brass mounts at the throat and drag. No hangers or hooks are included, as the daggers were carried in a leather frog that was attached to the wearer’s belt.

The dagger itself remains in about VERY GOOD+ to NEAR FINE condition, with the scabbard is somewhat lesser condition. The blade is mostly bright with scattered light surface oxidation and age discoloration. This is most evident at the ricasso. The guard is slightly bent at one of the quillons, and the embossed sheet brass grip covering shows some dents and dings. The brass components of the scabbard have a rich, uncleaned bronze patina. The wire wrap remains in place and is secure, while the faux tortoise shell grip covering shows some surface scuffing and light wear. The scabbard has a moderately oxidized brown patina and remains bright under the brass mounts. The scabbard body shows numerous bumps, dings and dents. The two-piece cast brass mounts have an untouched bronze patina and retain crisp imagery. There is a small split at the seam of the drag and the upper mount seams show some crudeness of assembly that certainly suggest that this dagger is not of the quality of the Whampoa Military Academy presentation quality, but more likely of a quality given to a lower level, non-academy officer. The upper mount is slightly loose but is still securely attached to the body.

Overall this is a solid and attractive example of a World War II era Second Sino-Japanese War Kuomintang Dagger. The dagger is complete with its scabbard and shows moderate carry and use but still remains crisp and displays very well. This would be a wonderful addition to any collection of World War II period edged weapons, particularly one that centers on the China-Burma-India Theater or on China and its weapons in the pre-communist period. These daggers do regularly appear for sale in the United States and this is a solid and reasonably priced example that you will be proud to own.