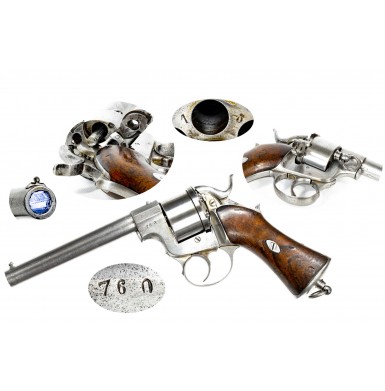 The Raphael revolver is distinguished among Civil War used handguns for its rarity, high price during the war, and the fact that the name we refer to the gun by comes from the arms seller who provided the guns to the US government and not its manufacturer or inventor. The French made guns were actually the Model 1860 Pidault-Cordier Revolver. The gun was a collaboration between Parisian gunmaker Martial Pidault and inventor Charles Cordier. The pair received a French patent for their design on May 28, 1860. German author, researcher and arms collector Marc Schwalm postulates in his book European Arms In The Civil War, that Cordier (who had helped develop the Thouvenin system for rifled small arms in the French military) was the inventor of the revolver and Pidault was the manufacturer.

According to US Ordnance records, approximately 106 of these French made, double action, 6-shot revolvers were purchased for US military use on September 21, 1861. The guns were purchased from the firm of George Raphael & Company. The high price of $26.33 was paid for the guns. The 106 guns that were purchased were delivered on September 21, 1861. Raphael also delivered 998 Lefaucheux revolvers to the Ordnance Department between November 30, 1861 and March 8, 1862. The price was truly exorbitant, as this was at a time when Colt revolvers were priced at between $15 and $25 each and Remington “Armies” were being sold to the Ordnance Department for between $12 and $15 each. The willingness of the Ordnance Department to purchase a foreign gun, with no track record of reliability, is an indication how desperately the US Ordnance Department needed revolvers in the field. It also indicates that the Ordnance Department may have actually seen the advantages of a revolver that fired a self-contained metallic cartridge, instead of the standard issue cap and ball revolver. While they may have been interested in experimenting with self-contained metallic cartridges with revolvers, it took Presidential intervention to get them to change their minds about metallic cartridge repeating long arms and consider buying the Spencer rifle and carbine!

The military sized Raphael revolver fired an early version of a center fire cartridge that was 11mm (or roughly .42 caliber). A pocket model was produced in 8mm as well, but that gun has no Civil War association. The back plate of the revolvers had six holes through which the firing pin on the hammer could contact the primer in the cartridge. There was one additional “blind hole”, between two of the firing pin holes, which allowed the firing pin to rest in it, as a primitive form of safety. To take the revolver “off safe”, you simply needed to pull the trigger. The gun was loaded through a gate on the right hand side of the frame. This gate was actually part of the revolving back plate at the rear of the cylinder. This back plate normally revolved with the cylinder, but when the loading gate was opened, the back plate was unlocked from the cylinder. In order to open the gate, the firing pin must be placed in the “blind hole” on the back plate. Once the gate was open, the cylinder was allowed to rotate freely to load cartridges or remove spent rounds. In order to eject the spent cases, the user simply unscrewed the lanyard ring from the butt of the gun and used the rod projecting from it to push the empty cases out of the chambers. Once the cylinder was rotated completely, the loading gate could be closed to lock the back plate and the cylinder to each other again. The lock work of the gun is what we would call “conventional double action” today. The user could fire the gun by a long, deliberate pull on the heavy double action trigger, or manually cock the hammer and have a lighter pull for more accurate shooting. The revolver had some other uncommon features for the period. The cylinder arbor pin entered through the front of the frame in the conventional way but was retained by a transverse screw at the rear of the frame, forward of the hammer. Removing this screw not only allowed the arbor pin to be withdrawn (freeing the cylinder from the revolver), it also allowed the removal of a small side plate on the left side of the revolver. This sideplate concealed the hand and hand spring for the revolver, which were now easily accessible for repairs or maintenance.

The 11mm guns were nominally 10.75” in overall length with a nominally 5.75” round barrel with a small octagonal section forward of the cylinder. The barrel’s varied slightly in length, typically within about +/- .125” The barrels were rifled with eight narrow grooves. Sights included a simple notched rear sight mounted on top of the octagonal flat, forward of the cylinder and a dovetailed front sight blade with a pyramidal base and sort of English style “peppercorn” bead on top. The guns were usually blued with the rear cylinder plate and hammer color case hardened. The guns were typically unmarked, except for a serial and series of assembly numbers, although some examples have been noted that bear the marking Raphael Paris, a marking that I have never seen either in person or in a photo. If the guns were to be marked at all, it would make more sense for them to bear the marks of Pidault and/or Cordier. The serial number was typically located on the left side of the frame forward of the cylinder. Assembly numbers were usually located on the front face of the cylinder, on the arbor pin, on the face of the frame and inside the grips, although they have been found in other locations as well. The guns had two-piece walnut grips that were typically smooth and lightly varnished.

Some estimates place the Civil War purchases of Raphael revolvers as high as 1,000 but this seems unlikely, as most of Raphael’s additional deliveries were at $16 each, and although many do not mention the type of revolver at least one delivery revolvers at that price is recorded as being Lefaucheux pattern pistols. According the Fredrick Todd’s seminal work American Military Equipage 1851-1872, these revolvers were imported by the Confederacy as well as the US government. However, Todd rightly points out that the unique cartridge required for the revolver makes any CS purchases a questionable decision. Additionally, Todd provides no documentation or evidence to support his assertion.

The Raphael revolver offered here is in near VERY GOOD condition. The revolver is fully functional, and the unique loading gate and rotating back plate all function exactly as they should. The gun is marked with the serial number 706 on the left side of the frame, forward of the cylinder. The assembly number 15 is on the front face of the cylinder, on the face of the frame (concealed by the arbor pin), on the cylinder arbor pin and inside both grips. The number above the two primary serial number ranges that Civil War used Raphael revolvers are usually encountered in. The primary range appears to run from the 1XXs through the upper 3XXs, and most Civil War used Raphael revolvers are encountered in this range. A small sampling has also been encountered in the very low 6X range. These very low-numbered guns may have been pre-war imports, or a small group of sample guns delivered at the very beginning of the war. More recent research suggests that a broader range of serial numbers may have been represented by the 106 revolvers delivered and they certainly were in no way consecutively numbered for this delivery. Other than the serial number and assembly marks, no other markings are present, which is typical of Civil War used Raphael revolvers.

The metal is mostly smooth throughout, with none of the original finish present. The revolver has been cleaned to bright and is now toning down to a more pewter gray color. The metal shows some scattered surface oxidation, age discoloration and has a salt and pepper appearance in some areas. There is some scattered oxidized pinpricking on the frame and cylinder with flecks of discoloration scattered all over the revolver. The only visible markings, the serial number 706 is clearly legible. The gun retains the original combination lanyard ring and ejector rod, which screws into the butt for storage. The ring still retains the functional mechanical ability to rotate freely as a lanyard ring, with a quarter turn the correct direction; the ring locks into place and allows you to remove the ejector rod. The bore is rifled with usual eight wide grooves with very narrow lands and is in about VERY GOOD condition. The bore is partly bright with very crisp rifling. The bore shows scattered oxidized discoloration and shows only some very lightly scattered pitting within the grooves. The grips are in VERY GOOD condition as well. They remain solid and are free of chips, breaks or repairs. The grips show the typical light to moderate wear that would be expected, with some scattered handling marks and dings present. The revolver loading system and back plate operate exactly as they should. The mechanism is fully functional as well, with the revolver timing, indexing and locking up exactly as it should, and operating crisply in both the double and single action modes. The revolver retains both the original front and rear sighs as well. It is 100% complete, correct and original, with the exception of a single replaced screw in the left side of the frame, retaining the cylinder arbor pin.

Overall this is a solid displaying example of one of the rarest of the Civil War used revolvers. When you consider the overall rarity of this model and its condition the price seems quite low. A common Colt Navy in this condition would be priced similarly or even a little higher; and that was a gun produced and acquired in huge quantities by comparison. Even many of the most advanced collections of Civil War handguns are unlikely to have a Raphael revolver in it. This gun would be an appropriate addition to a collection that centered on US or CS handguns, early cartridge guns, or imports arms. This is a nice looking example that would be right at home in any Civil War handgun display. Raphael revolvers have always seemed to be a bargain for Civil War collectors, considering the overall rarity of the guns. This unique revolver will certainly be a conversation starter when you are showing off your collection to other antique arms enthusiasts.