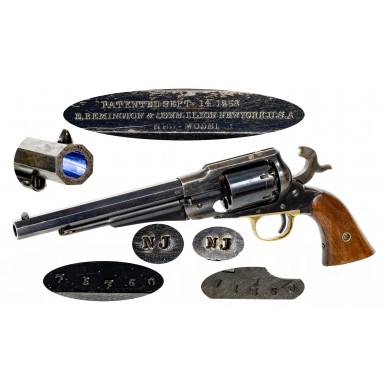 The Remington “Army” .44 caliber percussion revolver was the primary competition to the Colt M1860 .44 percussion revolver during the American Civil War era. Although Sam Colt was the better salesman and marketer, Remington eventually beat Colt out of their military contracts by delivering a comparable, and some felt superior, product for less money. In 1864, after the US government had finally beat Colt’s price down to $14.00 per revolver (they had been paying $20.00 or more per gun in the early days of the war) Remington agreed to furnish their “Army” revolver for only $12.00 per gun. That ended the reign of the Colt Army as the first choice for the Ordnance Department procurement officers.

In the field, even though the Colt revolver had the name and the mystique, many cavalry troopers preferred the much sturdier solid frame design of the Remington revolver. Approximately 106,000 Remington New Model Army percussion revolvers were purchased by the US government during the American Civil War, with a total of approximately 114,000 of all types of Remington percussion revolvers purchased during the course of the war. Approximately 80,000 of these were purchased during the last two years of the war, between 1863 and 1865. According to the research published in Remington Army & Navy Revolvers 1861-1868 by Donald L. Ware, Remington revolvers through serial #149,000 were accepted prior to the end of the Civil War. Guns below serial #123,000 were accepted prior to the end of 1864.

“I hereby offer you an order to furnish the State of New Jersey with one thousand (1,000) Remington army pistols, calibre .44, each to be accompanied with a screwdriver and cone wrench. These arms are to be in all respects equal in quality of material, finish, and workmanship to the sample pistol deposited by you at this office on the 2d instant. They are to be subject to State inspectors, and none will be received or paid for but such as pass inspection and are passed by the State Inspectors.”

This last sentence is of particular interest as there has long been debate about the quality of the pistols delivered to the state of New Jersey. The New Jersey guns received at least a cursory inspection and as with the New Jersey purchased muskets were marked with state ownership marks. Two types of “NJ” marks were stamped on the guns. One variant used dies roughly 1/16” in height and these small “NJ” marks were stamped on the left barrel flat forward of the frame and on the lower left side of the frame above the front bow of the triggerguard. A second type of marking used a die roughly 1/8” tall and this “NJ” mark was only applied on the barrel in the same location as the other variant, but not on the frame. Surviving examples of New Jersey marked Remington New Model Army Revolvers shows varying quality, with some clearly being factory seconds, and some being apparently first class guns. As these were revolvers were not part of the Ordnance Department contracts, they were not inspected by the Federal inspectors and typically are unmarked other than with the NJ markings. However, some do appear with sub-inspection marks on some parts, suggesting that these parts may have been salvaged from other US contract revolvers that otherwise did not pass inspection. Author and researcher Donald Ware in his book Remington Army and Navy Revolvers 1861-1888 notes that he feels that “Remington culled the best of their second-class revolvers to fill this order.” An analysis of the serial numbers of the New Jersey marked examples shows that the revolvers were delivered in the 58,XXX to 75,XXX serial number range.

The New Jersey Contract Remington New Model Army revolver offered here is in about VERY FINE condition overall. The gun is also a perfect example of one of those second class guns delivered to the state of New Jersey under the August of 1864 contract. The is serial number 71760, but this is only part of the story. The serial number appears on the bottom of the barrel with no alteration. However, in the two other places where the number is present it has been altered. The lower left side if the grip frame is serial numbered 71560 with a “7” then stamped over the “5”, changing the serial number to 71760, matching the barrel. An additional “7” is stamped above the “5” in addition to the one stamped over the “5”, all in an attempt to make it clear that the new number is 71760. The grips are both numbered in pencil 71560 on their interior and have that number lined-through with the new number 71760 written above the first one. This suggests to me that frame and grips #71560 were originally mated to a barrel that did not otherwise pass inspection. The new barrel installed in the gun was number 71760. Rather than altering the serial number on the barrel, which is the only number visible without removing the grips, the factory altered the concealed numbers to match the barrel. Interestingly, the frame has a small R sub-inspection mark on it, further suggesting that the frame was likely attached to a barrel that did not pass inspection. As is typical of most Remington New Model Army revolvers, there is no serial number on the rear of the cylinder, although a small sub-inspector’s P is present of the rear face of the cylinder. A small sub-inspector’s B is also present on the left rear of the triggerguard. These are the only parts have US sub-inspection marks on them. The left barrel flat and lower left side of the frame are both stamped with the small, nominally 1/16” NJ ownership mark. Some researchers believe that the smaller double “NJ” mark is the “early” inspection mark and the larger single “NJ” is a later inspection mark. However, if the guns were delivered in anything close to chronological order, this gun would be near the end of the serial range of the New Jersey guns, suggesting that this inspection mark theory may not be correct. The presence of sub-inspector marks on some parts and not others and the factory altered serial number on the frame and grips all support they belief that at least some of the guns delivered to the state of New Jersey were in fact, “second-class” revolvers.

Other than the serial numbers and the few inspection marks, the only other marking is the barrel address. It is clearly rolled stamped in three lines on the top barrel flat:

The marking is deep and clear, with the first “S” in “sons” showing some die damage with the letter not fully formed through the body.

As noted, the gun remains in about VERY FINE condition. It retains about 80% of its original blued finish overall. The finish loss is primarily from flaking on the frame and cylinder, with most of the barrel loss due to high edge wear and thinning from carry and use. The barrel probably retains about 90% of its blue, with the largest areas of loss being a thumbprint sized patch on the right angled flat a couple of inches behind the front sight and some flaked and worn areas around it. Otherwise, there is silvering thinned loss along the barrel edges. The frame shows flaking and loss as well as thinning and fading and probably retains about 65%+ of its blue. The cylinder shows one quadrant with a thumb sized area of oxidized loss with some surface roughness, but otherwise retains most of its blue, probably about 70%+. The areas of loss on the frame and cylinder have mostly developed a lightly oxidized plum brown patina, while the areas of loss on the barrel have a more silvery-gray color. The metal is almost entirely smooth with some patches of minor surface oxidation on the cylinder and some flecks on the frame, where minor surface roughness is present. The face of the muzzle shows some freckled oxidation as well. The bore of the revolver is in about FINE condition. It is mostly bright, with excellent, crisp rifling present. The bore shows some scattered patches of light surface oxidation, some frosting in the grooves and a small amount of very lightly scattered pitting. All of the barrel edges remain sharp and the gun is very crisp overall, showing some light real world use but no abuse. There are a couple of minor impact marks on barrel and some minor scratches on the reverse of the frame, forward of the cylinder. These are all probably simply from carry, handling and use. All of the cones (nipples) appear original and are very good, usable condition. The action is mechanically excellent, with a tight lock up, excellent timing and indexing. The grips are in about FINE condition as well. They show some lightly scattered handling marks and dings but retain crisp edges and the tips of the leading and trailing points remain sharp as well. As noted, the grips are pencil numbered to the gun. As this was not an Ordnance Department contract purchase, no cartouches are present on the grips, with is correct.

Overall this is a really attractive, crisp and high condition revolver that displays very well. With only 1,000 of these New Jersey contract revolvers purchased, this is a relatively scarce gun when compared to the eighty-thousand New Model Army revolvers purchased by the US Government. This means that only 1 in 80 martially marked New Model Army revolvers were part of this New Jersey contract. This would be a fine addition to any collection of Civil War military revolvers, as an addition to an advanced Remington collection or to display with other New Jersey marked arms. The renumbered parts also make this a very interesting example for study in order to better understand the way in which Remington serviced their contract with the state of New Jersey.