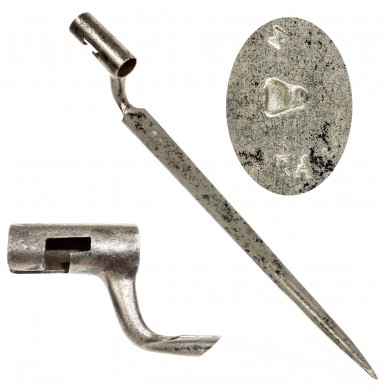 On April 12, 1794 Congress authorized the establishment of two national armories to produce small arms for the use of the United States military and any temporary volunteer forces that might be raised in the case of a national emergency. The act further authorized the expenditure of up to $143,640 (a rather precise amount) to procure small arms for the young nation. These purchases were to be made through a combination of domestic contracts and by acquiring foreign made arms. With this act of congress, what were to be known to collectors as the US Model 1794 series of contract muskets and bayonets had their genesis.

The need to acquire the arms was pressing. A December 16, 1793 report to the Senate by Secretary of War Knox had revealed that only 31,015 serviceable muskets were currently in possession of the Federal Government, spread out over several storage facilities. An additional 15,670 muskets were in storage as well, but all were damaged, and it was not clear how many could be repaired and made serviceable. This left the young United States with very little in the way of small arms should a national crisis arise. Since the end of the American Revolution, tensions with Great Britain had been increasing, primarily on the high seas where the British Navy controlled most of the major international shipping lanes. Additionally, the French Revolution of 1789 had created major unrest in Europe. Not only were other European monarchies concerned about the spread of Frances new egalitarian ideas but were also afraid of the spread of French colonial ambitions. The French had declared war on Austria and Sardinia in 1792 to advance their goals of European domination and by the following year had declared war on Spain, Holland and England. The conflict and instability of the situation in Europe certainly threatened to spread onto the North American continent, and potentially embroil the young United States. As such, the need to prepare for a war that seemed to be looming on the horizon was quite pressing.

The arms contracts of 1794 were a stop-gap measure intended to shore up the supply of small arms in the near term, allowing time for the two national armories to be built and to start delivering arms. Between April of 1794 and December 1795, the US Treasury entered into contracts with at least six contractors to deliver a total of 7,000 muskets complete with bayonets and scabbards at the price of “twelve dollars and one third, bayonet and scabbard one dollar.” The contractors were Thomas Annely (Philadelphia), Peter Brong (Lancaster), Jacob Dickert Lancaster), Owen Evans (Providence Township), John Miles (Philadlephia) and James Nicholson (Philadelphia). These contractors were issued a large number of existing parts from the Schuylkill Arsenal in Philadelphia which were to be assembled into complete muskets. Annely, for example, received 50 barrels, stocks, bayonets and ramrods between 1797 and 1798, but no locks. However, records only account for 12 muskets being delivered by Annely in 1797, but it is likely that records of other deliveries simply do not survive. Larger contractors received more parts. For example, Jacob Dickert received 540 barrels, no stocks, 200 locks, 990 bayonets and 990 ramrods between 1797 and 1799, with recorded deliveries of 904 muskets between 1797 and 1800. John Miles, the most prolific of the contractors, was issued 1,055 barrels, 598 stocks, 848 locks, 998 bayonets and 1,098 ramrods between 1797 and 1799 and delivered a total of 1,625 muskets between 1796 and 1800. The samples noted above indicate the following: 1) Some contractors were more able to produce certain parts than other contractors were. For example, Dickert was issued no stocks, so he was apparently capable of making those, and was only issued about 60% of the barrels for his total delivery. This suggests that Dickert was quite capable for producing both of those components on his own. Annely was apparently able to produce locks, as he was not issued any and Miles was able to produce at least some of all the components, particularly stocks and locks. 2) None of the contractors were particularly capable of producing ramrods or bayonets, as in all cases the six documented contractors received almost all of their ramrods and bayonets from the Schuylkill Arsenal. Of the 5,575 muskets and bayonets that can be documented as being delivered by these contractors between 1796 and 1800, 2,388 of the ramrods were issued from Schuylkill Arsenal, as were the same number of bayonets, indicating that only about half of those two parts were of new manufacture.

The muskets delivered under these contracts were based upon the French Model 1766 Charleville Musket and it is safe to assume that some of the parts issued from Schuylkill Arsenal were parts salvaged from French made guns, possibly scavenged from the 15,760 damaged and unserviceable muskets in Federal stores. Other parts were sourced from specialty contractors like William Rose who delivered some 2,958 ramrods during the period as well as some 5,106 bayonets. These components were utilized not only for the new contract arms, but also in the repair and refurbishment of the damaged arms in storage.

Researchers have similarly assumed that the newly produced bayonets were also of the French pattern, most likely conforming to the post-1752 production French Model 1746 style as author and researcher Peter Schmidt categorizes them, or the Model 1754 pattern as author and researcher Erik Goldstein from Colonial Williamsburg categorizes them. It is worth noting that in Goldstein’s study of French socket bayonets, The Bayonet in New France 1665-1760, he refers to a pattern of 1716 with multiple contracts that were slightly different and then a post-1750 production that evolved into what he call the Model 1754. He does not include a Model 1746. As none of the model designation terminology used by either author was of the period, and these are designations applied by researchers, authors and collectors, I feel it worth noting that the M1746 of Mr. Schmidt and the M1754 of Mr. Goldstein are essentially the same bayonet, particularly when the total lack of consistency of such items during the period is noted. While some of the newly made American bayonets delivered with the 1794 contract arms may have more closely resembled British bayonets, known examples marked MILES and ROSE are certainly of the French pattern.

As can be seen by the above analysis, less than 5,600 newly made muskets with bayonets were delivered by 1800 under the 1794 contract. Likewise, the newly established Springfield Arsenal had produced less than 3,000 arms by 1798 and Harpers Ferry had yet to deliver a single musket. This led the Federal Government to enter into a second and much larger round of contracts in 1798. Between 1798 and 1799 some 40,700 muskets with bayonets were contracted for by the US government, to be provided by 27 contractors. The only contractor from the 1794 contract to receive a contract in 1798 was Owen Evans. Again, most of the contractors obtained at least some parts from the Federal Government, most notably blank stocks. It is also interesting to note that only one of the 1798 contractors other that Owen Evans had ever had arms making experience, this was William Henry II (or Junior) of Nazareth, PA. Other noted deliveries under the 1798 contracts included bayonets by Perkins & Kinsley, which are marked with the “IP” mark of Joseph Perkins and a rudimentary “American Eagle” on the blade. Additional contractor marked bayonets include the “DG” marked bayonets by Daniel Gilbert, “AW” marked bayonets by Ard Welton and the “EW” marked bayonets by Eli Williams, to name a few. Additional bayonets that are marked with maker’s initials that have yet to be identified certainly exist as well.

Offered here is a VERY GOOD and scarce example of an Early Federal Era US Socket Bayonet that might be from the 1794 or 1798 contracts but could potentially date as early as the 1780s. The bayonet is maker marked with a pair of initials that read RA on the face of the blade, near the shank. An additional deep touch mark is present above the initials that could be a rudimentary Eagle Head or might represent something else. An additional small touch mark is also present on the blade that resembles a rudimentary hourglass.

The bayonet generally conforms to what Schmidt refers to as post-1752 French M1746 dimensions, as well as the nominal dimensions of many 1794 and 1798 contract bayonets, with a slightly shorter than typical blade that is very slightly wider than the bayonets of the latter part of the 1790s. The shorter, wider blade are the factor that suggests to me that this bayonet may be slightly earlier than the mid-to-late 1790s. The bayonet measures 16 7/8” in overall length with a 1 7/64” wide blade that measures 13 ½” in length from the tip to the shoulders and 14” if you measure from the tip back to the face of the neck. The face of the blade has a rudimentary narrow fuller that is roughly 5 ¼” in length. The socket measures 2 5/8” in length with a nominally 1” muzzle-to-stud distance and is cut for a top mounting stud. The bore diameter of the socket measures nominally .875” and the rear diameter of the socket measures nominally .88”. The neck of the bayonet measures 1 3/8” in length and has a relatively flat face that is typical of many Federal Era American bayonets. The socket is unbridged and was produced without a bridge, as suggest by the slightly rounded edges of the mortise cut at the rear of the socket.

As noted, the bayonet is in VERY GOOD condition. The bayonet has a moderately oxidized mottled pewter and smoky gray patina with scattered areas of brownish and black oxidized discoloration over most of the metal surfaces. The bayonet was probably cleaned at some time in the past and is now toning down. There is a barely visible diagonal hammer weld line where the shank of the bayonet joins the blade. The typically obvious differences in color between the blade and the shank/socket materials is less noticeable because the of the old cleaning. Typically, the color differential is because the blade is made of steel with the socket and shank are made of iron. The metal is moderately oxidized and shows even light to moderate pitting over most of the surfaces with some more moderate pitting on the socket. The blade shows some tiny forging flaws here and there, with more obvious flaws in the socket. Some minor stress cracks and flaws are present on the socket, as well as some minor damage and wear around the edge of the socket face. The crudely lap seamed socket closure is clearly visible inside the socket. There is some visible waviness along the length of the blade that may be production flaws, minor bends from use or even a combination of both.

Overall this is a solid and relatively attractive example of a very scarce maker marked American socket bayonet from the early Federal Era. The blade is marked with initials that are worthy of additional research and a touch mark that may be an early American Eagle. The bayonet has a very cool look, showing a combination of crude forging and more skillful finishing. This would be a fine addition to any collection of early American socket bayonets or as an addition to your early Federal Era musket. Maybe some diligent research will eventually reveal exactly who “RA” was and how many bayonets he delivered to our fledgling nation.