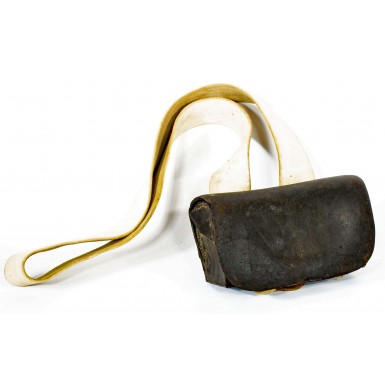 In 1859, the British military adopted a new cartridge box, or “pouch” in their parlance, that was designed to hold fifty rounds of reserve ammunition for the line infantryman. The box had a tin liner that was evenly divided into five sections to hold five wrapped packets of ten paper cartridges for the .577 caliber Pattern 1853 Enfield Rifle Musket. The cartridges for immediate use were carried in an “expense pouch” or ball bag that was worn on the front right of the soldier’s waist belt, while the 50 round cartridge box was suspended from a sling to the rear of the right hip. The Pattern 1859/60 Cartridge Box was made of heavy blackened bridle leather with both an inner and outer protective flap that was secured by a white buff billet that engaged a brass finial on the bottom of the box. The box measured a nominal 4” in height, was 7.25” long and about 3.5” deep. The box was designed to be carried by via a “pouch belt”, better known as a cartridge box sling, not on the waist belt. The 2.5” wide sling was of white buff leather for the British line infantry and black bridle leather for rifle regiments and volunteers. The sling billets were secured by a pair of black jappaned buckles on the bottom of the pouch and passed through a pair of retaining straps on the back of the box. As originally designed, the box had an integral cap pouch on its inner face and a strap inside the lid to carry the “T” shaped sergeant’s gun tool when it was dismounted to two pieces. In 1860, the box was modified with these two features eliminated, although it appears that the earlier pattern of the box remained in production and use for sergeants, however with a different tin that only carried 30 rounds of ammunition and include a lidded compartment the size of the other two cartridge compartments that was used to carry tools and accessories to keep the private’s guns functional.

During the course of the American Civil War, large numbers of English infantry accouterments were acquired by the southern Confederacy. According to Josiah Gorgas’ summary of “overseas” purchases of arms and materiel dated 3 February 1863, some 34,731 sets of infantry accouterments had been acquired by the south up to that point in time. A complete set of accoutrements included not only the cartridge box (pouch) and its accompanying sling (pouch strap or pouch belt), but also a waist belt, cap pouch (cap pocket), ball bag, oil bottle and bayonet scabbard frog. The scabbards themselves were acquired in bulk separately. Some sets of accouterments were also acquired pre-cut but not assembled as “kits,” which allowed them to be shipped flat, taking up much less cargo space in the holds of the blockade runners. It is generally believed that these kits were subsequently assembled in Richmond, although some extant examples suggest that the kits were not always assembled exactly as was intended. At least some of these Confederate purchased infantry accouterments saw use with Union soldiers as well, as captured blockade runner cargos were often sold at Prize Court auctions to the highest bidder, allowing northern purchasers to obtain the English leather goods. Massachusetts soldiers, in particular, appear in period images wearing English infantry accouterments.

The majority of the Confederate purchased accouterments were secured from the primary Confederate supplier in Great Britain, S. Isaac, Campbell & Company. SIC&Co secured the accouterments from a variety of sources and contractors, with Alexander Ross of London being one of the primary suppliers, along with Hebbert & Company and William Middlemore, also of London and Birmingham accoutrement makers Frederick Barnes & Company, Robert Fletcher and J Scholefield Son & Goodman. Most of the Confederate purchased are unmarked, although when they are the mark of S. Isaac, Campbell & Co and A. Ross & Co are the ones most often encountered. The southern purchased accouterments are not British military marked and do not bear the Broad Arrow-WD marks of the equipment owned by the British government.

Offered here is a FINE condition example of a British Pattern 1859/60 Cartridge Box (Pouch) of the post-1860 style without the integral cap pocket and tool strap. The box is free of any British military ownership markings and is essentially unmarked except for a small leather makers cartouche on the inside rear face of the inner flap that appears to be the letters CE. I do not know what maker or contractor this mark refers to. The box contains the standard five-section tin and its original jappaned iron roller buckles on the bottom of the box, as well as the original brass closure finial. The original white buff closure strap is in place, with the correct “blind stitch” securing it to the outer pouch flap. The closure strap is solid and not cut, which is uncommon for these boxes. Often when these cartridge boxes are found the closure strap is cut at an angle through one edge to the hole in the center of the strap. While it has been suggested that this was done by Confederate ordnance to facilitate opening the box in the field, I find this suggestion unlikely. Rather the cut is typical of the type of damage typically inflicted on US accouterments and equipment of the period when it was sold as surplus and the military wanted to be sure the items would not be re-sold to the government. In any case, I have always felt that the “Enfield” cartridge boxes with cut closure straps were sold as surplus and were less likely to have a southern association.

The box shows the expected scattered scuffing and handling marks, some minor finish loss and wear and some surface dirt and grime. The stitching remains tight and secure and is mostly complete, with only some very small areas of minor thread loss. The leather is somewhat dry and stiff, but the box remains solid and serviceable with the flaps opening as they should. The box includes a one-piece white buff cartridge box sling that measures approximately 2” wide and 62” in overall length, including a pair of nominally 4” billets. While the sling has the general appearance of a correct British sling it is a period US cartridge box sling, likely part of one of the sets of white buff accouterment belts and slings produced for the soldiers to wear during the Grand Review. A correct British sling would be 2.5” wide, rather than 2” and would measure between 50” and 54” in length, not counting the billets which were sewn to the body of the sling separately. As noted, this is a one-piece sling which is typical of US military pattern slings. The sling is in about FINEcondition as well and is unmarked with the exception of a stamped letter G that has a bluish tint to the ink, followed by a handwritten 32 in black ink on the interior of the strap.

Overall this is a really wonderful example of a scarce commercial British Pattern 1859/60 Cartridge Pouch. The box is not British military marked and would be a typical example of the type of cartridge box purchased by the Confederacy in large numbers from Great Britain. While it would be impossible to prove that this is a Confederate purchased example, it would be equally impossible to prove that it was not. These boxes are tremendously harder to find for sale than the US cartridge boxes of the period, and this is very attractive, complete and correct example. The accompanying sling is almost certainly an American one of the period that looks wonderful with the box and displays very well. Despite the sling not being a correct English sling, it fits the box wonderfully and enhances the display of the fine and scarce “Enfield” cartridge box.