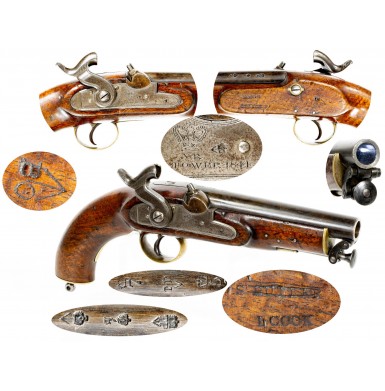 In 1822, the British Government formally created a branch of service known at the Coast Guard. Up until this point in time, the duties that are thought of as the traditional role of the modern Coast Guard were performed by several different services, including the Revenue Service, the Customs Service, the Royal Navy and various ad-hoc local lifesaving and coastal safety patrol organizations. As with the United States Coast Guard, the initial impetus for the formation of such a service was to patrol the shores for potential smugglers. These “Revenue Service” patrols were intended to make sure that the primary source of tax revenue, customs or import duties, were not evaded. By the early 19th century the combination of the various customs and revenue duties with lifesaving and shore patrol duties resulted in the establishment of the British Coast Guard, as a sub-department of the Board of Customs, but under the direct operational control of the Royal Navy. This meant that the Coast Guard was controlled and supplied via the logistical systems of the “Senior Service”. It would be nearly one hundred years, in 1915, before the United States would combine the various duties and services as the US Coast Guard.

As the 19th century British Coast Guard was supplied and organized by the Royal Navy, the arms and equipment were typically of the same pattern then in use by the Royal Navy. An exception to this was the Pattern 1831 Coast Guard and Customs Service Pistol. This short, large caliber flintlock pistol was intended specifically for the use of the new branch of service and never saw general use with the navy. The Pattern 1831 pistol was nominally 15-Bore (about .67 caliber) with a 4.5” wedge-retained octagonal barrel. The pistol had a captive ramrod of the style that became common with the adoption of the New Land Pattern Pistol circa 1802. Like nearly all pistols then in British service the Pattern 1831 Coast Guard Pistol was a muzzleloading, smoothbore, single shot, flintlock. Rather than the ubiquitous belt hook that had typified Royal Navy Sea Service Pistols since the early 1700s, the Coast Guard Pistol included a musket style swivel mounted in its flat butt, intended to accept a lanyard of sling.

Despite being adopted in 1831, the pistol was already obsolete as the British military was starting to experiment with percussion ignition arms. That same year, the Royal Navy received their first one hundred pistols altered from flint to percussion. The following year 2,000 percussion pistols were ordered for the Coast Guard. The exact model or style is not known to authors and researchers. It is possible that these were older flintlock pistols altered to percussion, or possibly it was newly made percussion pistols utilizing altered flintlock locks, or components of flint locks that had never been assembled and were then re-worked to be percussion locks. Some theorize that these yet to be identified pistols were the functional prototypes for the Pattern 1839 Coast Guard Pistol.

The Pattern 1839 Coast Guard Pistol took the form that resembles the Pattern 1842 Lancer’s Pistol, which is a more commonly encountered British percussion military pistol from the same period. The Pattern 1839 Coast Guard Pistol retained the same flat butt design of the Pattern 1831 but utilized a slightly longer 6” pinned barrel that was round rather than octagonal. The lock was percussion but used older New Land Pattern Lock plates and internal components that even included the bolted sliding safety behind the hammer. Of course, the new pistol used a percussion hammer. The hammer had a flat neck like the earlier flint cocks, with a rounded percussion nose. The walnut stock was mounted with brass furniture, including the butt cap, triggerguard, ramrod pipe and side nail cup (lock screw escutcheon). The pistols had blued barrels, color casehardened locks and hammers, with the swivel ramrods left bright. Like the Pattern 1831, no belt hook was utilized, and a musket style sling swivel was mounted on the butt. These new Coast Guard Pistols were “set up” by the various contractors, the Tower armory and the Royal Small Arms Factory at Enfield.

That same year, the new Pattern 1839 Sea Service Pistol was adopted for use by the Royal Navy. This pistol was nearly identical to the Pattern 1839 Coast Guard Pistol, with two significant exceptions. First, the caliber was reduced to 26-Bore (about .57 caliber) and secondly the pistol was mounted with a conventional belt hook rather than the butt swivel. One other change, possibly the result of the stocks of flint lock parts being used up on the Coast Guard Pistols was the elimination of the bolted safety behind the cock.

By the mid-1840s, the Pattern 1839 Sea Service Pistol was seeing use with a number of other services than the Royal Navy. The robust design was shorter and more manageable than the 9” barreled Lancer’s Pistol and was also a much more controllable caliber at 26-Bore (.57 caliber) than the 12-Bore (.71 caliber) Lancer’s Pistol. Only the Sea Service pistol were equipped with the belt hook, while those that were issued to the Coast Guard used the expected sling swivel in the butt. Those Pattern 1839 “Sea Service” pistols that were issued to the various departments of the land services that were authorized to carry a pistol like Land Transport Corps were issued pistols without the belt hook or swivel. The pistol pattern also saw service with other departments of government service like some police departments and some colonial militias.

Offered here is a NEAR FINE British Pattern 1839 Sea Service Pistol for Coast Guard Use. The guns qualifies as a Sea Service Pistol as it is nominally 26-Bore (.57 caliber), rather than the original Coast Guard caliber of 15-Bore (.67 caliber). However, it was made without the belt hook for naval service and has the mount in the butt for the musket-style swivel typical of Coast Guard guns of the period. The flat, rounded, stepped lock has the general appearance of earlier pattern flint locks, but is not an altered lock as no extra holes are present for the flint battery. The lock is stamped with the {ROYAL CROWN}/VR forward of the hammer, over TOWER 1844, which is engraved. A small {CROWN}-{BROAD ARROW} government ownership mark is present forward of the crown, under the percussion bolster. The barrel is marked with two sets of British military proof marks, typical of a gun that was refurbished during its service life. The standard British military proofs are present on the upper left quadrant of the breech and read {CROWN}/TP/{BROAD ARROW}, {CROWN}/7/B and {CROWN}/{BROAD ARROW} from the breech towards the muzzle. The top of the barrel is stamped with a set of refurbishment proofs that read {CROWN}/5, TP/{BROAD ARROW} and {CROWN}/7 from breech to muzzle. A large BO/{BROAD ARROW} Board of Ordnance ownership mark is present on the counterpane of the stock, as well as a pair of Birmingham (or the Regions) gun maker marks, both of which are stamped upside down. The top mark is I COOK and the lower appears to read S BUTLER. The “I” is likely an archaic “J” and a number John and James Cooks worked in the gun trade during the 1840s and 50s. The name “S BUTLER” is lined through and in my opinion, Butler was the original contractor to produce the gun and Cook was the gun maker who refurbished the pistol for continued use, likely in the latter part of the 1840s or early 1850s. A pair of weak {CROWN}/1inspection marks are present on the right side of the grip, along with another weaker inspection mark. Other than these marks that are weak due to being placed where they were regularly touched when the pistol is held, the markings are crisp and sharp throughout the metal and the wood.

As noted, the pistol remains in about NEAR FINE condition. The barrel retains about 35%+ thinning and streaky period blue that are probably from the I Cook refurbishment of the pistol. The balance of the metal has a smoky bluish-gray patina that has blended with the remaining blue making the gun appear to have more finish than it really does. The lock and hammer have a mottled, lightly oxidized brownish-gray patina that suggest the original case colored finish. As noted, all markings in the metal are crisp and clear with the markings in the wood mostly clear and legible as well. The lock is mechanically functional and remains crisp and tight. The bore of the pistol is in VERY FINE condition and is mostly mirror bright with some scattered dirt and minor oxidation and some flecked areas of pinpricking. The swivel ramrod is in place and remains fully functional. The rod is lightly marked with a set of maker’s initials. The brass furniture has an attractive, medium golden patina. The stud mount for the butt swivel is in place but the swivel itself is missing. Possibly it was removed during the refurbishment and the pistol was moved from Coast Guard service to some sort of civil use possibly by police or prison guards. The stock is in about NEAR FINE condition as well and remains relatively crisp with no indications of having been sanded. The stock shows the usual scattered bumps, dings and mars from carry, handling and use, but none of these are excessive. There are only two small condition issues with mentioning. There is a surface grain crack that runs from the tail of the lock up and around towards the breech plug tang. There is an impact mark in the wood to the rear of the lock and this might have started this grain crack. The crack does not appear structural but is noted and photographed for exactness. The only other issue are two small, shallow holes in the stock, right in front of the triggerguard. These might have held some small staple or ring that would allow the butt swivel to have a sling connect to the stock, in front of the triggerguard. Other than these two issues, there is no obvious damage or excessive wear to the wood.

Overall this is a very nice example of a relatively scarce British Pattern 1839 Sea Service Pistol for Coast Guard Use. This would be a nice addition to any collection of mid-19th century British military pistol collection and is a good example of one of the last of the large, single shot percussion smoothbore pistols to see service with the Royal Navy and other branches of British service. The gun is 100% complete and correct with the exception of the missing butt swivel and would certainly display well in any collection.