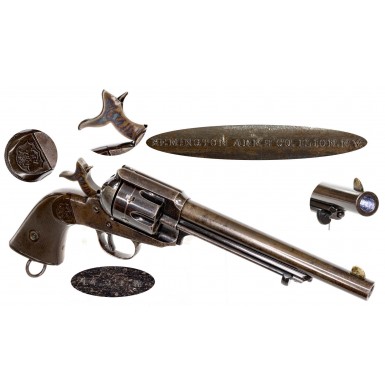 This is wonderful, complete, and NEAR FINE condition example of the rarely encountered Blued Remington Model 1890 Single Action Army Revolver. With only 2,020 of these revolvers produced by Remington between 1891 and 1896, the Model 1890 remains one of the most difficult of all the Remington revolvers for a collector to acquire, particularly in the higher states of condition or with a blued finish.

The Model 1890 was a large frame, single action “six-shooter” that was produced in only one caliber and two barrel lengths. The revolver abandoned the large, angled web style under lug that typified Remington’s large frame revolvers from the late 1850s onward, and instead slimmed the profile to resemble the venerable Colt Single Action Army more closely. The 6-shot revolver was only chambered for .44 Winchester Center Fire (.44 WCF or .44-40) cartridge, as that was undoubtedly the most popular cartridge during the period of American expansion in the west. With a Winchester rifle (whether Model 1873 or Model 1892) chambered in the same caliber, any western cowboy was well armed with a pair of versatile weapons and only had to carry a single type of cartridge to load either one. The selection of this single caliber can be partially attributed to the owners of Remington at the time the Model 1890 was introduced - Winchester and Marcellus Hartley who owned the Union Metallic Cartridge Company (UMC). In 1888 Remington had entered receivership due to significant business setbacks, and was purchased by Winchester and Hartley, who both owned 50% of the company. The M1890 was an opportunity for Winchester to put its own competitor to the Colt Single Action Army on the market, without technically violating the long-standing agreement between Colt and Winchester to “stay out of each other’s markets”. In other words, Colt would concentrate on making handguns and try not to interfere too much in the lever action rifle market and Winchester would stay out of the revolver market. The Model 1890 was a great way to compete directly with the Single Action Army by Colt, without overtly starting a war between the two companies. The choice of the caliber was also a logical way for Winchester to emphasize the favorite pistol caliber chambering of its most popular rifle line. For Hartley, the more ammunition that UMC sold, the better. The Model 1890 revolvers were only produced in two-barrel lengths, either 7 ½” or 5 ½” and could be had in nickel-plated or blued finishes, although it is estimated that only a very small number of the guns were made in blue. Remington Arms monogramed hard rubber grips completed the aesthetic package for the revolvers, and a swiveling lanyard ring in the butt helped to ensure that a clumsy cowboy could retain his pistol if he dropped it while in the saddle.

However, Remington was always playing catch up when it came to competing with Colt on the large frame handgun front. Even though their streamlined M1890 was nearly a direct clone of the famous Colt single action, it was introduced at a time when the large single action revolver was beginning to fade from popularity, and swing-out cylinder revolvers from Colt and Smith & Wesson were becoming the handgun of choice for many Americans. As the “Wild West” became less and less wild, the writing on the wall regarding this type of handgun. Remington shipped no Model 1890s in 1895 and only 1 in 1896. The poor sales meant that the model was dropped from the product line to become little more than a footnote in firearms history, and a highly desirable rarity for the gun collector today.

This particular Remington Model 1890 Single Action Revolver is in NEAR FINE overall condition and is one of the very scarce examples with a factory blued finish. The gun is quote crisp and sharp throughout, with no signs of abuse, excessive wear, or cleaning. All markings remain crisp and clear, and the gun appears to be 100% complete, original, and correct in all ways. The revolver is serial numbered 567 on the left side of the grip frame, under left grip panel. The cylinder is not numbered, which is typical of most Remington revolvers. The same serial number is present in the lower portion of the interior of the loading gate hinge and inside the triggerguard. According to Remington shipping records, regarding the numbers of M1890s shipped between 1891 and 1896, it appears that this revolver was manufactured and shipped in early-to-mid 1892, assuming the shipping was in a somewhat chronological order by serial number. The top of the 7 ½” barrel is crisply marked in a single line:

The left side of the frame, below the cylinder, is marked 44 C. F. W. to indicate the caliber.  The revolver retains about 20%+ of its original blued finish, with most of the loss due to flaking and wear from handling and use. The areas where blue has flaked and worn have mostly developed a smooth plum brown patina that makes the gun look like it retains more finish than it really does. This also makes the gun very attractive. The frame retains the most blue, primarily in protected areas and the ejector housing also retains a nice amount of original blue. The metal is smooth throughout and free of pitting and the markings on the barrel remain clear and crisp. The color casehardened hammer retains the majority of its vivid coloring and is very attractive. The gun remains mechanically EXCELLENT as well and functions perfectly on all positions. The revolver times, indexes and locks up perfectly. The bore of the revolver is about VERY GOOD and remains partly bright with some moderate amounts of darker oxidation along its length. The bore has strong rifling but shows some scattered light pitting along its length, along with a few small areas of more moderate pitting. The ejector rod functions smoothly and correctly, and the loading gate moves correctly between the open and closed positions. The original swiveling lanyard ring is in place in the bottom of the grip frame and as is common the movement of the ring over time has created a wear mark in the finish on the bottom of the butt as well as some wear marks on the bottoms of the grips. The two-piece Remington checkered hard rubber grips are in about NEAR FINE condition. They retain both retain crisp intertwined RA monogramed logos at the frame juncture. As is typical of the hard rubber of the era, they have faded and discolored slightly with time and now have more of a rich chocolate brown color, rather than their original darker, nearly black color. Another fault of the rubber composition of the 19th century is that the grips tend to become brittle with time and tend to crack and disintegrate with age. Thankfully these grips remain in very nice condition with no major wear or damage. The grips are solid and complete and are free of any breaks or repairs. Although no visible pencil numbers are present on the inside the fit and condition of the grips leaves little doubt that they are the original grips for this gun. The right grip shows some minor warping, which has pulled the lower portion of the grip very slightly away from the frame and also shows two small chips at the lower leading and trailing edges. These are very minor considering the inherent weakness of the grips as they age, and the grips look great on the gun. The grips show some light wear to the checkering, and some minute handling marks, but are really in very nice condition and match the overall condition of the gun wonderfully.

Overall, this is a really crisp and fairly well-preserved example of one of the hardest Remington revolvers to find for sale and in the least common finish. The revolver is extremely attractive, retains enough of its original blued finish that has mixed with an attractive plum patina that really allows the gun to display wonderfully. For any serious collector of Old West handguns, the Remington Model 1890 is the bookend in their collection that establishes the end of that era of large frame, single action revolvers. This is a very nice and crisp example that is all complete and correct and is wonderful mechanical condition with nice grips. It will no doubt be a nice addition to your collection of arms of the American West or great piece for a more advanced Remington collection.