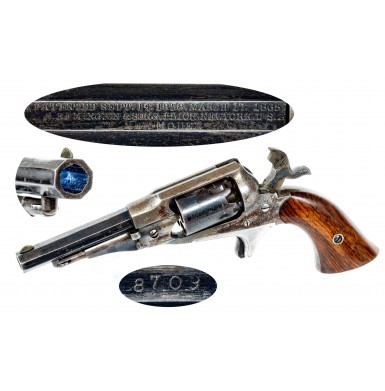 In 1865, as the American Civil War was coming to an end, the firm of E. Remington & Sons began to look at the reality of an immediate future without large US military manufacturing contracts as their primary market. This meant that for the foreseeable future civilian sales would likely be the bulk of Remington’s business, unless they could secure peacetime contracts with the US government or military contracts with foreign governments. One of the primary indications of the firm’s change in business strategy was the introduction of the Remington New Model Pocket Revolver. This diminutive handgun was clearly intended for sale to the general public and was not a military pattern firearm.

The new pocket model was intended to compete with the venerable Colt Model 1849 “Pocket” revolver and was essentially a scaled-down pocket version of the large frame Remington percussion revolvers that had been sold to the US military by the thousands during the Civil War. The gun was a five-shot, single action, .31 caliber percussion revolver. The octagonal barrel was available in four standard factory lengths from 3” to 4.5” in half-inch increments. The silhouette of the gun was almost identical to the larger Remington percussion revolvers of the period with the classic triangular loading lever under the barrel. Only the use of a spur trigger without a triggerguard represented a significant change in the profile of the gun from its larger brethren. The revolvers were produced with blued barrels and color casehardened hammers, with the frames available in blue, nickel and silver plated. Entirely nickel plated revolvers were produced as well. Grips were two-piece varnished walnut, with exotic grip options available at an additional charge. Between 1865 and 1873 some 25,000 of these diminutive revolvers were produced by Remington. However, the handgun was essentially obsolete when it was introduced as the era of the self-contained metallic cartridge had arrived. As a result, many of the later production revolvers were produced as .32 rimfire cartridge revolvers, rather than percussion guns as originally intended. Even more were altered from percussion to metallic cartridge at the factory with most being “new old stock” that had been produced in percussion but never sold by the factory. Others were percussion guns returned to the factory by their owners to be converted to cartridge. In an attempt to capitalize on the potential for versatility, some were offered with both factory percussion and cartridge cylinders, allowing use with either type of ammunition. Due to the period when these revolvers were produced, when metallic cartridges were becoming the standard for firearms, original, unaltered percussion examples are significantly less common than the cartridge variant.

Offered here is a FINE condition example of a desirable, original percussion configuration Remington New Model Pocket Revolver. The gun has the scarce and desirable “half-plate” finish with a silver-plated frame and a blued barrel. The octagonal barrel is 3.5” in length and the overall length of the revolver is about 8”. The top flat of the barrel is clearly marked in three lines:

The revolver is serial number 8709, and this number is found on the frame, under the left grip, under the barrel (concealed by the loading lever) and lightly inside the grips in pencil. The rear face of the cylinder, like most later production Remington percussion revolvers, is not numbered. The revolver retains about 65%+ original bright blue on the barrel with some thinning, light wear and loss from handling and use. The loading lever retains about 40% of its original blue, with the cylinder retaining about 45%+ original blue. In all cases, the areas where the blue has faded, thin or worn, now has a mostly smooth, brownish patina with plum tones. The iron frame retains strong traces of the original silver plating, mostly along the rear edge of the frame. The balance of the frame shows a mottled and lightly oxidized brownish patina. The spur trigger sheath retains nearly all of its original silver plating, which shows some minor thinning and wear but still rates about 95% present. The hammer retains about 75%+ of its vivid case coloring, with the left side retaining nearly all of the case color and the right side showing more wear and loss. The revolver is in EXCELLENT condition mechanically and times, indexes and locks up as crisply and tightly as the day it was produced. The cylinder chambers show moderate oxidation in their interiors and the cone recesses show light to moderate oxidation from cap flash as well. The loading lever remains fully functional and operates exactly as  it should. All of the percussion cones (nipples) remain in crisp condition. The original German silver front sight is in place on the top of the barrel, near the muzzle. The bore of the revolver is in FINE condition as well and remains mostly bright with crisp rifling and some lightly scattered oxidation. The original varnished wood grips remain in FINE condition as well and they retain much of their original finish. The grips are solid and free of any breaks, cracks or repairs. They do show some light wear along with scattered minor bumps, dings and handling marks.

Overall this is a very crisp and fine condition example of a Remington New Model Pocket Revolver in its original percussion configuration. The revolver is 100% complete, correct and original and would a wonderful addition to any collection of Remington handguns or percussion pocket revolvers.