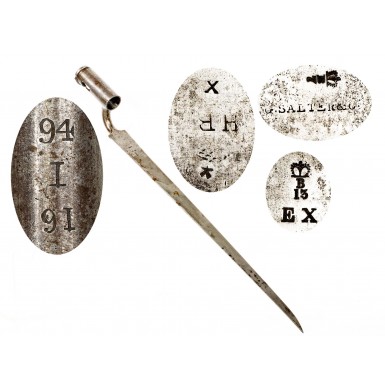 This is a very nice example of a unit marked British Pattern 1845 Extra Service Socket Bayonet, marked to the 94th Regiment of Foot. The bayonet pattern was for all practical purposes a Pattern 1842 socket bayonet designed for use with the Lovell’s bayonet catch system. However, the letters EX stamped on the blade below the inspection marks make it clear that the bayonet is “Extra Service” and was intended for issue and use with the Pattern 1845 Extra Service Musket. The “Extra Service” musket was essentially a late production version of the older Pattern 1839 percussion musket. The Pattern 1839 musket had been superseded by the Pattern 1842 Musket (aka “New Line Musket”) in 1844. However, due to the inability of the Birmingham trade to manufacture large numbers of the new Pattern 1842 to the stringent standards newly established by the Board of Ordnance, in 1845 an “Extra Service” musket was authorized for production as well. This was basically the earlier Pattern 1839 musket, equipped with new Lovell bayonet catch, and was manufactured to a much lower standard than the “New Line” musket. The “Extra Service” musket was intended for issue to British militia, British colonial troops and other secondary military organizations, while the line infantry of the British Army was usually issued the most current pattern of arm, in this case the P1842 “New Line” musket.

These are the muskets that collectors encounter that appear to be Pattern 1839 muskets but have manufacturing dates on their locks that are later than the years we normally associate with P1839 musket production. According to the 1854 Report by the Select Committee on Small Arms to the House of Commons some 126,165 “Extra-Service” (Pattern 1845 of the Pattern 1839 pattern) muskets were delivered by the Birmingham gun trade between 1844 and 1853. During the same time frame, only 36,915 “New-Line” (P1842) muskets were delivered by the Birmingham Trade. However,  it is worth noting that 1850 was the last year the 1842 musket was delivered, as the trade prepared for the production of the newly adopted Pattern 1851 Minié Rifle, which commenced in 1852.

This British Pattern 1845 Extra Service Socket Bayonet is in about VERY GOOD+ condition and is nicely unit marked.  As noted above, the bayonet was for all practical purposes a Pattern 1842 socket bayonet, however the bayonet could be used equally well with the Pattern 1839, Pattern 1842 or Pattern 1845 Extra Service Muskets. Like the P1842 the bayonet has the eccentric ridge designed for use with the Lovell’s Patent bayonet catch. The bayonet has a 17” blade (measured to the shoulder, 17 ¾” measured to the neck) and a 3” socket with a nominal muzzle ring diameter of about 24mm. The bayonet blade has a mostly smooth medium dove gray patina, with scattered patches of lightly oxidized mottled discoloration, as well as some light to moderate oxidized pinpricking and peppering. There is additionally some scattered minor surface roughness that could probably be cleaned off with a little effort, oil and 0000 steel wool.  The iron socket of the bayonet has a dove gray base color with mottled discoloration that appears to be a combination of surface oxidation and some faded flecks of the original blued finish that has worn and faded. The socket remains round with no dings or damage to the openings that would impede it being mounted on a musket. The eccentric Lovell’s catch ridge is in good condition and should engage a Lovell catch securely.

The unfullered blade is clearly marked with a Birmingham inspection mark: {CROWN} / B / 13 / EX. The ricasso is maker marked: G. SALTER & Co, with the additional letters H B / X and an * near the ricasso. An additionally, smaller, sideways Birmingham inspection is present above the Salter maker mark and reads {CROWN} / B / 7. These additional letters likely indicate the bayonet was produced by a Liege based contractor for Salter. The firm of George Salter & Co was a Birmingham manufacturer of spring steel and balances (scales) that was started in 1760 by Richard & William Salter. Upon their deaths John & George Salter took over the business and by the 1790s they had become one of the leading employers in West Bromwich (about 5 miles NW of Birmingham), continuing to manufacture springs & balances, and adding bayonets to their manufacturing capacity. For the next 200 years the company continued in business under the name of George Slater, and during the late 18th Century and 19th Century they were one of the premier bayonet makers to produce bayonets for the British Board of Ordnance (later War Department), as well as the commercial and export trade – especially to the North & South during the course of the American Civil War. During the latter part of the 19th Century, Salter returned to their original specialty and continued to expand their spring steel, spring and weighing and balance business. Salter actually continues to do business today as a subsidiary of Avery Weigh-Tronix, who acquired Salter in 2000.

The most interesting marking on the bayonet is the British regimental mark engraved on the top of the socket 94 / I / 91. It is not 100% clear if the middle character is an “I” or a “1”. The period of use of this bayonet was during the transition from the regular use of numbers to letters to designate the companies of British infantry. The marking indicates the bayonet was used by the 94th Regiment of Foot, Company I (or maybe 1), man #91. The 94th Regiment of Foot was formed in 1794 as the Scotch Brigade and served as the 94th during the Napoleonic Wars from 1802, being disbanded in 1818, some three years after the conclusion of that conflict. Five years later, in 1823, the regiment was reconstituted and remained in service through 188, at which time it was combined with the 88th Regiment of Foot. During the period that this bayonet would have seen service (1840s and 1850s), the regiment saw service in Madras (India) from about 1839-1854, when it returned to England. At this point part of the regiment was dispatched to the Crimea to serve as replacements for losses suffered in that conflict, with the balance being sent to Karachi and then to Peshawar on the North-West Frontier in Pakistan. The regiment remained in that service through 1868. Later service saw combat in South Africa during the Anglo-Zulu War, combat in the Transvaal during the Basuto Gun War and significant action during the First Boer War.

Overall this is a very nice example of a well-marked British Pattern 1845 Extra Service Socket Bayonet. The bayonet has nicely engraved regimental markings that indicate the bayonet saw service with an important British Line Infantry Regiment with good history. The bayonet was produced by a famous Birmingham maker, and bears his company’s name clearly on the blade. This would be nice addition to any Extra-Service musket and would be equally at home mounted on a P1842 musket as well. It would be a nice addition to any collection of 19th century British bayonets and would fit very well in a collection of Crimean War era arms.