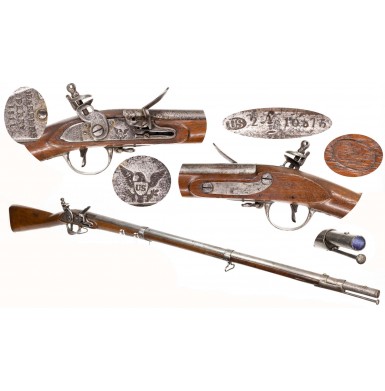 Even before the establishment of the National Armories at Springfield and Harpers Ferry, the United States government was engaged in the repair and refurbishment of small arms. During the American Revolution manufactories were established in Philadelphia for that purpose, as well as to assemble arms with newly made stocks and furniture that utilized used and repurposed barrels and locks of both English and French origin. With the end of the war, the repair, refurbishment and rebuilding of arms continued as the primary function of the arsenal system for several years.

With the establishment by Congress of the national armories at Springfield and Harpers Ferry in 1794, the focus changed from the rebuilding and repair of muskets to their manufacture. The manufacture of muskets began at Springfield in 1795, although examples bearing markings were not produced until 1799. Production at Harpers Ferry would not start until 1800. The muskets produced were of the “Charleville Pattern” and were based upon the French Model 1763/66 flintlock muskets. Today these guns are referred to as the US Model 1795 series of muskets, but that is a modern collector term of convenience. The muskets produced at the two armories were slightly different from each other in terms of furniture and some minor features and the production of the arms evolved over time at both locations, leading to modern collector terms like “Type I”, “Type II” and “Type III” to help categorize the guns based upon these changes.

With the establishment of the primary manufactories at Springfield and Harpers Ferry, other arsenals that had been in operation during the Revolutionary War were either closed or repurposed as primarily storage facilities and sometimes repair facilities. One such location was Greenleaf’s Point, which was eventually renamed Washington Arsenal. The site was located on a peninsula at the confluence Potomac and Anacostia Rivers in the southwest part of what is now Washington D.C. The site was originally private property but was chosen for the establishment of a defensive redoubt by George Washington circa 1791 and by 1794 consisted of a single gun battery with earthworks. However, by 1803 the site had expanded and been funded by Congress to establish an “arsenal”, rather than a “fort” at the location. From that point onward the storage and eventually the maintenance of arms occurred at this location. By 1816, the testing of small arms began there as well, as the arsenal was the closest to the seat of political power and the offices of the War Department.

It is not completely clear when the wholesale repair and refurbishment of arms began at the Washington Arsenal, rather than simply the storage and light maintenance of the same. However, by June of 1814, at the height of the War of 1812, the Washington Arsenal was receiving parts and components necessary to affect significant to small arms. By the fall of 1817 records indicate that gunstocks were being sent to Greenleaf’s Point for the repair of muskets. With the conclusion of the War of 1812, thousands of arms were in need of maintenance and repair and the Washington Arsenal took part in this work from at least 1818 through about 1831. The repairs were primarily performed on US arsenal produced Model 1795 muskets and in many cases the guns were also modernized during the course of the work. As the 1795 was no longer the current production model in US service, the rebuilding and restocking program took advantage of the opportunity to upgrade the older guns to more closely resemble the current production US Model 1816 Musket. The most obvious changes to these older arms was the restocking of the guns with stocks that followed the profile of the Model 1816 with the low comb butt that no longer followed the older “Charleville” profile and the shortening of the nominally 44 ½” barrels to the standard of 42” introduced with the 1816 musket. The work at Washington Arsenal was initially overseen by George Bombford who would eventually become the Colonel of Ordnance for the US Army. Bombford oversaw a crew of at least thirteen workmen, who included Eber Ward as the foreman, three “stockers”, three “filers”, three “finishers”, a “polisher” and two “laborers”. In the typical fashion of the Ordnance Department, which always tried to reduce transportation distances and costs if at all possible, the parts necessary for the repairs were supplied by the Harpers Ferry Arsenal in Virginia, rather than the more distant Springfield Arsenal in Massachusetts. To indicate how much work was going on during the period of 1818-1821 some 6,224 muskets were repaired and refurbished at Washington Arsenal. Of those, 2,853 received new stocks. Repairs, refurbishment and restocking of older arms would continue at the arsenal through the end of the decade.

Offered here is one of the scare surviving examples of a Washington Arsenal Refurbished and Restocked US Model 1795 Harpers Ferry Musket. The gun is an 1811 dated example which makes it a late production “Type II” musket, which were produced at Harpers Ferry from about 1808 through some time in 1812. The gun is serial numbered 2 No 10875. The “2 No” marking indicates the second serial number series of Harpers Ferry arms. The first series ran from 1 to 25,000 and then restarted at “2 No 1” or “25,001”. Technically this is musket number 35,875 that was produced at Harpers Ferry. The lock is marked with a large {Spread-Winged Eagle} under the pan with a “US” in a shield on its breast. The tail of the lock is marked in three vertical lines and reads:

The barrel is proved at the upper left quadrant of the breech with a raised US in a depressed oval, followed by the serial number. There is no {Eagle Head} proof present which suggests that the barrel was shortened at both ends with roughly an inch or so removed from both the breech and the muzzle. The gun retains the standard original production nominally 6 ½” long flat iron flint lock with beveled edge and pronounces teat at the rear. The lock has an integral rounded, fenced and bridled iron pan with the typical Harpers Ferry frizzen with plain toe and unadorned face with prominent median ridge. The cock is of the standard flat, beveled edge type with a heart-shaped reinforce. The lock remains in original flint and is not reconverted. The gun shows two sets of assembly mating marks, one from the original production and Harpers Ferry and one from the Washington Arsenal restocking. The Harpers Ferry mating mark consists of three vertical file slashes with a larger space between the first and the second and third slashes, marked as | ||. The reassembly mating mark applied at Washington Arsenal is three slashes that form the image of an arrow and is marked /|\. The first set of marks is only found on the metal parts, indicating use at Harpers Ferry while the second mark is under the barrel and in the tang mortise of the stock, indicating Washington Arsenal application. The cartouche of Eber Ward is present on the counterpane of the stock. Ward was the foreman of the Washington Arsenal from circa 1818 to 1825 and had previously worked at Springfield from at least 1813. His script EW in an oval on the counterpane indicates that he approved the rebuilt musket for service.

The barrel of the gun has been shortened to 42” from an original length of around 44 ¾” and the bayonet lug reattached to the top of the barrel, 1 ¼” from the muzzle. The stock is of the US Model 1816 style and has the low comb of that pattern of stock. Since the barrel bands are of the 1795 pattern and are secured by band springs to their rears with projecting tabs, the stock has been mortised to accept these earlier pattern bands and springs. The gun retains the 10 ¼” long triggerguard plate with extended finials at the ends from the original Harpers Ferry production. The buttplate is an unmarked flat iron plate with short round tang that is secured by two screws. Which was standard of Harpers Ferry production from about 1808 through 1819. The musket retains its original period of use bell-shaped Harpers Ferry pattern wire sling swivels which are attached to a lug forward of the triggerguard bow and the middle barrel band. An original, period button head ramrod is in place in the ramrod channel. It is full length and retains good threads at the end.

The musket remains in about VERY GOOD condition. As noted, the musket’s lock remains in original flint and the barrel appears to remain in that condition as well. There is no indication of reconversion and although the touchhole shows moderate erosion and wear, which has caused it to expand, it remains unmolested. The touchhole is a little high in the pan but remains correctly tapered and angled. The lock remains fully functional and operates crisply on all positions. The metal of the gun has a medium gray patina with scattered surface oxidation, discoloration, and mottling. The metal was likely cleaned long ago but the cleaning did not affect the markings and they all remain clear and crisp. The barrel shows moderate pitting around the breech area with scattered light pitting over the balance of the barrel. The lock shows scattered light pitting and oxidized discoloration as well. The bore of the musket is in about GOOD condition. It is moderately oxidized with evenly distributed light to moderate pitting along its entire length. The stock remains full-length and solid and is free of any breaks, cracks, or repairs. There are a couple of minor slivers of wood missing from the ramrod channel as well as couple of very tiny chips around the breech plug tang and around the lock mortise. Otherwise, the stock shows only some scattered bumps, dings and mars from handling and use as well as some scattered light surface scratches here and there. The stock remains fairly crisp with strong edges and any rounding and wear being from real world use and no indications of having been sanded.

Overall, this is a really nice example of a scare variant of a Harpers Ferry made US Model 1795 Musket that was refurbished and restocked at the Washington Arsenal. The 1811 dated musket certainly saw service during the War of 1812 and was subsequently rebuilt at Washington Arsenal sometime between 1818 and 1825 while Eber Ward was the foreman at the arsenal. It was then put back into service after having been modified to more closely resemble the current production US Model 1816 Muskets. These arsenal rebuilt guns are scarce and often hard to officially identify. This is wonderful all original example that would be a fantastic addition to any advanced musket collection and is a great study piece to assess the work of the secondary US arsenals in the period between the War of 1812 and the Mexican American War.