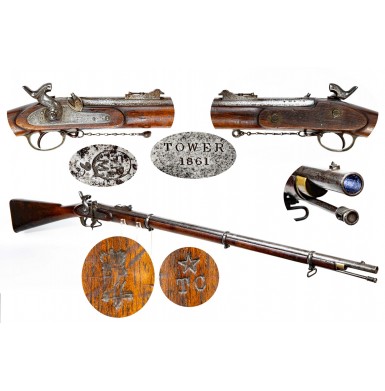 The Pattern 1853 “Enfield” Rifle Musket was the second most used infantry long arm of the American Civil War. The Pattern 1853 Enfield was an important weapon in military long arms history as it was the first “small bore” rifled long arm to see general issue to all British military personnel, effectively making every soldier a “rifleman” and eliminating both the smoothbore musket and the large caliber “Minié Rifle” as legitimate battlefield weapons. The reduced caliber .577” bore was a significant ballistic improvement over the .702” bore of the Pattern 1851 Minié Rifle and the overall design of the gun was the epitome of muzzle loading military firearms technology of the time. The Pattern 1853 would significantly influence the design of the new American Model 1855 Rifle Musket, and its subsequent replacements the Model 1861, Special Model 1861 and Model 1863/64. It would be the last of the percussion ignition, muzzleloading arms to see general service with the British military, being replaced by breechloading rifles about the time the American Civil War came to an end. The Pattern 1853 was so revolutionary and so well designed that it was effectively the “AK-47” of the era, becoming either the standard battle rifle for nearly every country in the world, or an equivalent “substitute standard”. Several million “Enfields” saw use across the globe during mid-19th century, so it is often difficult to determine if a specific Enfield rifle or rifle musket was here for the American Civil War, especially in the absence of specific US or CS markings on the gun. Most resources indicate that the US government acquired some 505,000 Pattern 1853 Enfields during the war, with Confederate purchases estimated at between 300,000 and 400,000, although it could be even higher with speculative purchases included. While Confederate inspected and marked Enfields are quite scarce and always command a premium on the collector market, verifiable US used Enfields are much more rare. The Confederacy had a specific system of inspection for most of the CS central government guns, which means many of those guns received inspection markings that identify them as Confederate arms. No such system was in place for the US government. Although those arms that were produced in America under contract for the Ordnance Department were rigorously inspected and were marked to indicate that they had passed this inspection process, arms acquired on the open market did not receive these inspections. Whether the gun was an American made one purchased from a retailer like Kittridge & Company or Schuyler, Hartley & Graham or an imported arm, they typically underwent only the most minimal inspection and were almost never marked in any way. As a result, finding an imported Enfield that is verifiably a US purchase is very difficult, and they are actually tremendously rarer than Confederate marked Enfields. However, they do appear from time to time, like the example offered here.

This particular Pattern 1853 Enfield Rifle Musket was produced by the Francis Preston of Manchester, a company that is best known to collectors as a bayonet manufacturer. The gun is twice marked FP/M/{ARROW}/2 twice behind the triggerguard, once in the stock to the upper rear of the lock and with a small FP/M in an oval over a 2 on top of the breech. The “2” indicates the gun is a “second quality” gun. I have seen this mark before on a couple of other Preston produced Enfield rifle musket, with at least one example in the George Wray Collection (which is now owned by the Atlanta History Center) being found on a Confederate numbered P1853. In all cases, the “2” was found on guns that had stocks that never would have been accepted by the British military. The Wray gun has a large knot in the butt, which would have eliminated it from consideration for British military service, making it a “second quality” gun. Similar wood issues were noted on other Preston guns with the “2” mark. On this gun, there is a knot and small void in the wood about an inch behind the rear barrel band. This flaw would make this gun a “second quality” gun as well. The gun is further marked with a clear {STAR}/TC} in the wood behind the triggerguard. While this mark has been misidentified in the past as being a Confederate import mark, related to the state of Louisiana, this is not correct. This is the mark of Tiffany & Company of New York, and this same mark also appears on the Robert Mole produced Pattern 1821 Enlisted Cavalry Sabers that Tiffany imported for sale to the US government during the Civil War.

The famous jewelry American jewelry firm of Tiffany & Company was established by jeweler Charles Lewis Tiffany in Brooklyn, CT in 1837. The company was founded with a $1,000 investment from Tiffany’s father. Charles Lewis Tiffany was the father of Louis Comfort Tiffany, who would go on to make Tiffany & Company a household name around the world. The original company was listed as a Stationery & Fancy Goods Emporium in the period directories. In 1838, a new location was opened at 259 Broadway in Lower Manhattan and was initially listed as Tiffany, Young & Ellis. In 1845, Tiffany published their first “Blue Book” catalog to offer their wares. While Tiffany was a jeweler and that was his area of concentration, the firm offered a wide array of items as a “Fancy Goods” retailer, including a large assortment of imported luxury goods. Like most serious fancy goods dealers, Tiffany also offered military items that were marketed to officers who were responsible to provide their own uniform, equipment and small arms. By 1853, the firm had reorganized as Tiffany & Company under the sole leadership of Charles Tiffany. With the coming of the American Civil War, Tiffany & Company drew upon their contacts from importing goods from England and on the European continent and placed orders for small arms to sell to the US government. The firm had expanded significantly since 1853, and was now located at 550 and 582 Broadway, occupying much of a city block. Between the fall of 1861 and spring of 1863, the company delivered more than 19,000 swords to the US government, most of which were imported enlisted cavalry sabers. These came in three basic varieties; British Pattern 1821 Sabers made by Robert Mole, British Pattern 1821 Sabers that were probably produced in Solingen, Prussia by S&K and Iron-Hilted US M1840 Heavy Cavalry Sabers produced by PDL, also of Solingen. The Mole produced Pattern 1821 sabers were marked with the same {STAR}/TC on their ricassos and scabbard drags, as found in the stock of this Pattern 1853 Enfield, behind the triggerguard. Tiffany & Company also sold a number of imported firearms to the US government. Between November of 1861 and March of 1862, they sold over 6,800 imported firearms to the Ordnance Department. These sales included:

60 Enfield Short Rifles with Bayonets @ $17 each

The gun has the usual Birmingham contract commercial lock markings, in this case a plain crown without a VR behind the hammer and TOWER/1861 forward of the hammer. The interior of the lock is marked by its maker, D. LEONARD. Daniel Leonard was Birmingham based gun, rifle and pistol maker working at 89 Aston Street, circa 1832-1865. The breech is marked with the usual Birmingham commercial view, proof and definitive proof marks. There are also a pair of 24 gauge marks, which indicate .58 caliber; interesting as the gun was intended for sale to the US Ordnance Department. Most of the P1853 Enfields imported were in the standard British 25 bore, or .577 caliber. As previously noted, the FP/M/{ARROW}/2 mark of Francis Preston is found in the wood twice behind the triggerguard, once on the flat above and to the rear of the lock, and another FP/M in an oval over a 2 is found on top of the breech. Francis Preston initially went into business in the Birmingham area as a Gun & Rifle Maker in 1816. In 1855, he established his Ardwick Works on Lime Kiln Lane in Ardwick, Manchester, Lancashire. There he forged bayonets and ramrods until 1870. During the early portion of the Civil War he also maintained an iron works at Ancoats Bridge (1861-1862) as well as a Birmingham location at 35 Loveday Street, also from 1861-1862. This location may have been more of a business and retail office, supplying the finished bayonets and ramrods to the Birmingham gun making trade. During this period gunmaking appears to have been a secondary avocation, and it is possible that Preston picked up portions of contracts that needed filler guns to complete them, delivering a few guns here and there to larger master contractors who needed to complete their contracts in a timely fashion. This is further supported by the fact that this gun utilizes a barrel of Belgian origin. A small Liège Perron mark is present forward of the bolster and the bottom of the barrel is marked with the intertwined EL of Liège. The bottom of the barrel also shows a {CROWN}/Z Liège controller’s mark. The matching assembly mark of \ \ / is found under the barrel, on the upper edge of the lock plate, and in the ramrod channel, indicating that the “lock, stock and barrel” all go together.

The gun is in about VERY GOOD condition, with the metal closer to “good” and the stock about “fine”. The gun retains no finish and has suffered from poor storage. The barrel, bands and rear sight have a mottled, oxidized and evenly pitted salt and pepper appearance with a dull pewter color with splotches of darker discoloration over all of the metal. The lock has a moderately oxidized brownish gray patina. All markings remain clear and crisp with only the Preston mark on the breech being weak. The lock remains in fine mechanical condition and functions very well on all positions. The bore of the gun is in VERY GOOD condition and retains clear, crisp rifling along its entire length. The bore is mostly bright with some scattered flecks of surface rust in the last few inches near the muzzle and some scattered pitting along the length of the bore. The gun retains its original rear sight, the original combination front sight/socket bayonet lug and an original, full-length ramrod. The gun retains both sling swivels and all three of the original small doughnut shaped screw protectors that retain the barrel band tension screws. The brass furniture has an attractive tarnished patina. The stock remains in FINE condition and is solid and full-length with no breaks, cracks or repairs. The stock is crisp and sharp with no indications of sanding. As noted, there is a flaw in the stock behind the lower barrel band, which is why the gun was rated “second quality”. All of the markings in the stock remain clear and crisp. The stock does show scattered bumps, dings and mars, but shows no abuse or excessive wear.

Overall this is a very nice example of an extremely scarce Tiffany & Company marked Pattern 1853 Enfield Rifle Musket. The gun is also marked by Francis Preston, an English contractor that is not regularly encountered. The large majority of Enfields purchased and used by the US government bear no markings at all, so finding a gun that can be concretely identified as a US used Enfield is very difficult. This is a definitively US purchased Enfield rifle musket that is complete and correct with fine markings that would be wonderful addition to any Civil War small arms collections.