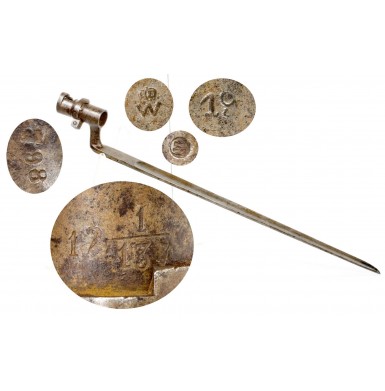 This is a very nice example of an incredibly scarce socket bayonet that was imported by the United States during the American Civil War. At first glance, it looks very much like a French Model 1847 bayonet, however a number of features quickly identify it as the socket bayonet for use with Model 1851 and Model 1857 Saxon (Dresden) Rifle Muskets. Approximately 29,000 of these rifle muskets were purchased by the US government, the majority being delivered by George Schuyler, who purchased at least 27,000 of them. However, it is possible that more of the rifles were procured, as a letter from arms dealer Herman Boker to US Secretary of War Simon Cameron, dated November 20, 1861, reads in part:

“Sir: We have the honor to inform you that we have received, per Saxonia, from Hamburg, arrived this morning, 443 cases rifled muskets - in all about 10,000….”

Over the years I have had the opportunity to offer about dozen of the guns, but I have only had about half that many of the bayonets; they are much rarer than the guns, which can hardly be considered common themselves.

The primary features that identify this as a M1851 Saxon (Dresden) Socket Bayonet, instead of the French bayonet that it closely resembles are: a nominally 16” blade rather than the nominally 18” blade of the French bayonet, slightly larger diameter socket, and the most obvious feature: two locking ring stops on the socket. These stops are located 180-degrees apart, in opposition to each other. I am aware of no other socket bayonet that has a pair of locking ring stops on the socket.

Overall the bayonet is in about VERY GOOD+ to NEAR FINE condition. The bayonet is marked on the face of the blade at the ricasso with a small (CROWN) / W inspection mark and is additionally marked with a 19 at the base of the face flute. The serial or mating number 798 is stamped on the obverse of the shank, which would have mated the bayonet to the gun that it fit, as they were not always fully interchangeable. The reverse of the shank is struck with a raised M within a depressed circle. This may be a maker’s mark, possibly of P.J. Malherbe of Liège. Nearly all the “Saxon” rifles that were imported to the US appear to have been Belgian contract arms that were manufactured by the Liège gunmaking firm of P.J. Malherbe & Cie. The top of the socket is marked with Saxon rack number, which reads 12 1/137. This would likely indicate that the bayonet was originally issued to the 137 man in the 1stcompany of the 12thSaxon infantry regiment.

The bayonet has the usual 2 5/8 inch long socket, a 16 3/8 inch long blade and an overall length of approximately 19 ½ inches. The muzzle diameter is nominally .830 inches.

The surface of the bayonet is mostly smooth with a medium pewter gray patina, with scattered patches of light to moderate darker age oxidation and some very minor light pinpricking. The socket shows some heavier pinpricking, along with the same moderate amounts of scattered surface oxidation and age discoloration. The blade would likely clean up if the new owner so desired, and a little oil, 0000 steel wool and some time would probably improve the appearance of the blade substantially. The original locking ring is present, is complete and remains fully functional.

Overall, this is a really nice condition example of a very scare Saxon M1851 Socket Bayonet that could well clean up to be even nicer. The bayonet is a crisp, well-marked example of a rather scarce Civil War import bayonet. These bayonets are so seldom encountered that in the decade I have only had the opportunity to own about a half dozen of them, and none for more than a few days. These are much less common than a Sharps or Spencer rifle socket bayonet, and yet those bayonets in the same condition often sell for at least $100 to $200 more than where this bayonet is priced. This bayonet would be a wonderful addition to your M1851 or M1857 Saxon / Dresden Rifle, and I’m willing to bet that your rifle does not have one of these scarce bayonets to display with it!