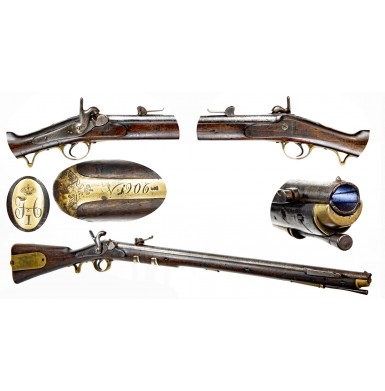 During the first half of the 19th century the military longarms of Russia were heavily influenced by the French weapons they had faced during Napoleon’s ill-fated 1812 invasion. The muskets often took the form of the French Model 1777 and the Corrigé AN IX (corrected to Year 9) patterns that followed it. As the century progressed the French influence continued and the French Models of 1816 and 1822 were certainly the basis for the Russian Model 1828 Flintlock Musket and the French Model 1842 back action lock percussion muskets certainly provided the Model for the first general issue Russian percussion musket, the Model 1845. However, when it came to rifled arms the Russians turned to the British for their influence.

In 1843, the Russians adopted a percussion ignition rifle based upon the British Pattern 1837 Brunswick Rifle. Rather than being produced at Russian Imperial Arsenals like Tula, the Russians relied upon the Liège gun trade in Belgium to produce the guns. They chose long time Belgian maker PJ Malherbe & Cie to manufacture the rifles that would be issued to the Russian rifle companies and regiments. The rifle was adopted in Russian service as the Model 1843 Luttich Carbine. The word “Luttich” is the German name for the city of Liège, so the model designation indicated where the guns were produced.

Like their British counterparts, the Russian Model 1843 Rifles were back action lock, percussion ignition muzzleloaders that relied upon deep, two-groove mechanical rifling to impart the spin to the projectile. While the British Brunswick Rifle was loaded with a belted round ball, the Russians relied upon a solid, conical “sugar loaf” bullet with two cast opposing “wings” that engaged the barrel’s rifling. The bullet design adopted by the Russians had been introduced by English gunmaker Charles Lancaster in 1846. The M1843 Rifle remained the only rifled long arm to see significant service with the Russian military until the adoption of the Model 1856 “Six Line” Rifled Musket. No doubt the adoption of the new Russian long arm was the result of the Russian army being almost universally armed with smoothbore muskets during the Crimean War, while the British military had adopted rifled long arms for universal issue in 1851. As a result, the British Army was at a distinct advantage in terms of infantry weapons during the course of the Crimean War.

As noted, the Model 1843 Luttich Carbine was the only rifled long arm to see significant use by the Russians during Crimean War, but only in the hands of specialized riflemen. The Brunswick inspired rifle was nominally .70 caliber with a 30 3/16” Damascus-twist barrel that was secured to the stock by three wedges and the screw through the breech plug tang. The two-groove rifling made one turn in the length of the barrel, just like its British brethren. The heavy, cupped head ramrod was secured in a channel under the stock via two brass thimbles. The backaction percussion lock was marked by the maker, Malherbe of Liège. Like the British rifle a heavy bayonet bar was secured to the right side of the barrel, near the muzzle, to accept a heavy, brass handled saber bayonet. The rear sight was fully adjustable quadrant leaf of the same pattern installed on the Colt contract altered US Model 1816 muskets that were converted to rifled and sighted percussion muskets for the Russian government during the war. The rear sight was graduated to a rather optimistic 1,200 paces. The front sight was a small blade. The mountings and furniture of the rifle were of brass. Small mountings included the brass nose cap, ramrod pipes, lock screw escutcheon and thumb plate. Larger piece of brass furniture were a large patchbox in the obverse butt, the buttplate and the triggerguard. The triggerguard was a semi-pistol gripped with a skeletonized projection to its rear. The patchbox carried the breech scarper and cleaning tools used in conjunction with the ramrod to keep the rifle in operation as well as greased patches for when belted round balls were used instead of the standard conical projectile. The tang of the brass buttplate was engraved with the Russian Imperial Eagle and with a serial number. This same number was typically stamped on the bolster of the rifle’s barrel and was also used to match the saber bayonet to the gun. The thumb plate, or wrist escutcheon, was engraved with the Imperial cypher of Czar Nicholas I, who ruled from 1825-1855. Stocks were of European walnut and were typically a dark brown color. Production numbers of the rifles are not readily available, but I have never encountered an example with a four digit serial number with the highest numbered example I have seen in the 9XX range. Like all 19th Century Russian military arms, the Luttich Carbine is extremely rare today and when examples are encountered, they are often in well-used condition, similar to the wear found on heavily used Confederate arms.

This rare Russian Model 1843 Luttich Carbine remains in about GOOD+ to NEAR VERY GOOD condition and like most Crimean War era Russian arms shows heavy wear and use. The back action lock is clearly marked in two lines: PJ MALHERBE & CIE / A LIÉGE. A Cyrillic inspection mark over the number 2 is present on the upper left quadrant of the breech. The buttplate tang is engraved with the usual Russian Imperial Eagle and No 906. The same number, 906, is also stamped on the bolster. Small {CROWN}/B inspection mark is present on the patch box, buttplate tang and  on the front tang of the triggerguard. The interior of the patchbox lid is numbered 9784, which might be a more correct “serial number”, more accurately indicating the actual number of rifles produced. The bayonet bar is stamped 7, which may not be a mating number, as the last Luttich Carbine I had was also marked “7” on the bayonet bar. The wrist escutcheon is clearly engraved with the Cyrillic Royal Cypher of Czar Nicholas I.

The Damascus barrel retains much of its twist patterning which is clearly obvious and shows traces of the original brown finish mixed with a mottled pewter gray and oxidized brown patina. The barrel is moderately oxidized over most of its surfaces with evenly distributed pinpricking and light pitting over its entirety. While the barrel is somewhat smooth, there are some patches of more aggressive pitting at the breech and some patches of moderately rough surface oxidation. The lock is smoother and remains clearly marked. The lock is fully functional and operates exactly as it should. The bore of the rifle is heavily oxidized and is mostly dark and dirty with light to moderate pitting along its entire length. Despite the pitting, the nature of the mechanical rifling means that the rifle would still likely shoot very well with the correct ammunition with the pitting having a negligible effect on accuracy. The original 1,200 pace quadrant rear sight is in place on the barrel. It is moderately oxidized as well and shows some damage to the leaf, which is slightly bent and has a chip missing from the right front edge. The sight still functions as it should and remains fully adjustable. The original front sight blade is in place on top of the barrel, near the muzzle. Both slings swivels are missing, and the ramrod is an old, incorrect replacement. The brass furniture appears to have been lightly cleaned long ago and now has an attractive, mellow golden patina. The stock is in about GOOD condition and shows moderate wear commensurate with the condition of the metal. The stock is solid and full-length but does show a number of both surface grain cracks and longer, deeper cracks. The most noticeable grain crack is about 2” long and is present on the lower portion of the butt near the buttplate. This is tight and solid and does not appear to be structural, but does appear to go though the entire stock on both sides. The reverse forend shows several cracks that primarily emanate from the rear wedge. The longest portion of this crack runs nearly 18” from the rear wedge at an angle above the middle wedge and terminates at the barrel channel. Some slightly shorter cracks spider from this this primary crack, all radiating upward at an angle to the barrel channel. An additional crack is present at the upper wedge on the reverse, running to the nose cap. Less noticeable cracks are present on the obverse forend as well. While these cracks are all visible, they appear to have been stabilized by old glue repairs and do not appear to be active. There are some chips of wood missing from the forend as well, around the swivel hole, barrel wedges and along the rammer channel. Some additional small chips are missing around the lock mortise and to the rear of the breech plug tang. In addition to the cracks and chips there are numerous bumps, dings and mars present in the wood. Much like a well-worn Confederate gun, the wood is only about “good” according to NRA Antique grading standards but is closer to “very good” when compared to other Russian guns of the period. Despite the wear and repaired cracks there is no serious structural damage or any replaced wood that I noted.

Overall, despite the somewhat worn and salty condition this is a really nice example of a very rare Russian Model 1843 Luttich Carbine. These scarce Crimean War period Russian military rifles rarely appear for sale, particularly in the United States where all 19th century Russian military arms are extremely scarce. This would be wonderful addition to any collection of Crimean War weapons, a collection of 19th century military rifles or a collection of Russian arms. If you want to add the correct pattern bayonet to the rifle, I currently have one for sale that fits the rifle perfectly, although it is not numbered to the gun. This bayonet is inventory number EWB-2584. These guns very rarely come up for sale. I am always looking for Russian weapons form the Crimean War period and have only had a handful in twenty years. In the same time, this is only the second Luttich Carbine that I have been able to offer, and that last one was in 2008 – twelve years ago! If you have an interest in Russian arms, the Crimean War or simply want to add a very rare 19th century military rifle to your collection, don’t miss your chance to get this scarce gun.