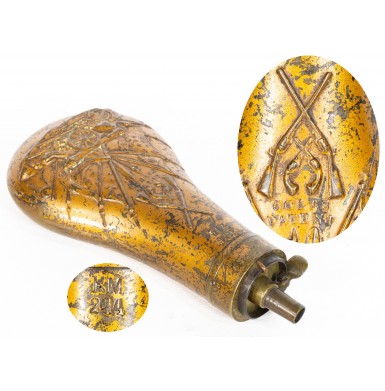 This is a scarce example of the Colt’s Patent Firearms revolver powder flask used by the Prussian Royal Navy, the Königliche Marine, with their Colt Model 1851 Navy Revolvers. The Prussian Kingdom did not order the Colt Model 1851 revolvers but rather acquired them accidently by intercepting a load of some 3,000 Colt “Navy” Revolvers that has been sold by Colt to the Russians in 1855. Samuel Colt had visited St. Petersburg in 1854 and the Russians had been suitably impressed with his new “Belt Model” revolver that they decided to purchase some. As a result of the visit, the Russians ordered 3,000 of guns. However, Colt had not acquired patent protection for his design in Russia, so the Russians also intended to manufacture unlicensed copies of Colt’s designs in their own factories once the guns were in hand and available to reverse engineer and copy.

Due to the outbreak of the Crimean War, the British Navy blockaded the Baltic Sea and effectively isolated the Russians from many foreign imports, particularly those being delivered by sea. It was suggested that the order of Colt revolvers could be delivered via rail, transiting from neutral Belgium through Prussia and into Russia. In August of 1855, during a customs search of the train when is stopped in Aachen (Prussia), the Prussian authorities found the revolvers and their accoutrements hidden in bales of cotton. The revolvers, along with their flasks and molds were confiscated. 1,000 of those guns were delivered to the Danzig Naval Yard in December of 1858 for use by the Royal Prussian Navy. The guns and their accoutrements were marked with the letters K M and with an inventory number. Although collectors have long referred to those guns and accoutrements as being Kriegsmarine (Navy) marked, or sometimes Kaiserliche Marine(Imperial Navy) marked, the letters really stand for Königliche Marine or “Royal Navy” as Prussia was a Kingdom during the period. The fate of the other 2,000 guns is not currently known.

The flasks delivered with the revolvers were the standard Colt Navy flask sold in America as well, with an embossed design including panoplies of arms, cannon and crossed Paterson revolvers and carbines. This was the final M1851 pattern flask (Rapley F#14) that saw use with most 3rd model and later production Colt Model 1851 and later Model 1861 Navy revolvers. The flasks had angled charging spouts that were originally designed to dispense a charge of about 20 grains (1.33 grams) of powder. The Prussian navy determined that this was too powerful a charge and cut the spouts down to dispense a nominally 15 grain (1 gram) charge, about a 25% reduction in powder.  Thus, authentic KM marked flasks typically have the shortened charger, although at least a few of the flasks apparently escaped this modification. Other than the addition of the “KM” markings and the shortened charger spouts, the flasks pictured in Robin Rapley’s Colt Percussion Accoutrements 1834-1873 as F#15 are simply the standard F#14 flask.

As the Prussians adopted combustible cartridges during the 1860s, the use of the powder flasks became less common, but they were never recalled from service. As such, the flasks remained in the inventories of the various ships they had been issued to until the percussion revolvers were withdrawn from service.

The Colt Model 1851 Navy Revolvers remained in service with the Prussian Royal Navy until they were phased out in favor of the new M/79 Reichsrevolver, which was a self-contained metallic cartridge gun. Interestingly, in 1869 the Prussians expanded their navy and needed additional revolvers, but no more Model 1851 Colts were available beyond the roughly 1,000 that had been delivered to Danzig in 1858. Thus a .36 caliber version of the Model 1854 Adams percussion revolver was adopted as the M69 revolver to be used alongside the Colts. What happened to the other 2,000 confiscated Colt Navy revolvers is not clear, but it is possible that the Prussians subsequently sold them back to their original owners, the Russians, or in some other way disposed of them.

The KM marked Königliche Marine Colt’s Patent Pistol Flask offered here remains in VERY GOOD + to NEAR FINE condition and has a wonderful dark, untouched patina. The flask is clearly embossed with the standard late-pattern Colt Navy design with panoplies of flags, a field cannon, artillery accouterments and a crossed pair of Paterson revolvers and pistols. The two-line COLT’S / PATENT legend is embossed below the guns. The flask is stamped in two lines on the front, just below the top, KM / 244. The sloped charger has been shortened as were most KM flask chargers and is now about .78” in length. The flask measures 6 ¾” in overall length, including the charger by about 3” wide with the body measuring 5 ¾” in length. The original charging handle is in place and functions exactly as it should, and the charging spout easily unscrews from the top of the flask. The brass top is securely attached to the body of the flask with three screws. The embossed decoration remains clear and crisp and shows more detail than the later production flasks that were struck with a die that had seen much more use. The copper body has a rich, ocher patina and is uncleaned with the face showing an even dark brownish-orange patina. The smooth, undecorated reverse of the body has a more mottled patina that ranges from rich copper to dark brown and retains some of the original brown lacquer. The face of the flask shows some very minor handling marks and tiny dents that do not detract from the overall appearance or crispness of the embossed panel. The rear of the flask shows more scattered bumps and dings and some small pushes in the copper, as well as a larger thumb sized dent near the center of the rear of the flask’s bod. The brass top, charger handle and spout have a rich bronze patina and are quite attractive. The charger spring is moderately oxidized and appears to be original. The charger functions exactly as it should. The seams of the flask body remain tightly sealed with no apparent structural damage.

Overall, this is a very nice example of a scarce and desirable KM Marked Colt’s Patent Firearms Navy Revolver Flask that remains very attractive. The face has a rich, dark patina with crisp embossing and the flask remains solid and functional with only some light to moderate wear. This would be a fine addition to your KM marked Colt Navy or to any Colt centered collection, particularly of Colt accoutrements and accessories.