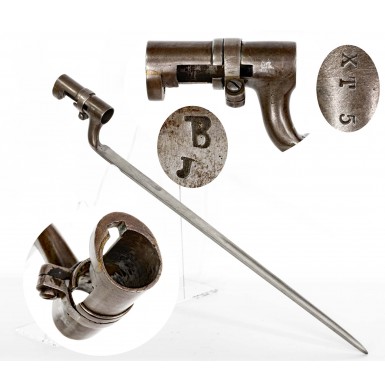 This is a scarce variant of the US Model 1816 pattern socket bayonet, one that includes an added locking ring that was never part of the original 1816, friction fit socket design. The bayonet has had the step to the original “T-shaped” mortise cut widened, allowing for a wider stud to pass through the original space and has had a locking ring added. This has effectively turned the bayonet from a “T” mortise socket to an “L” mortise socket. A shoulder was then added to the socket to the rear of the locking ring to support it and a stop stud for the ring was added as well.  A new, taller bridge has been brazed on to the rear of the socket as well, suggesting that the bayonet was no longer intended to pass over the standard low stud of a US Model 1816/22/27 musket but rather to be used with a gun with a taller bayonet mounting stud. This bayonet variant is pictured as figure B63 in Robert Reilly’s seminal book American Socket Bayonets and Scabbards, with the line drawing on page 50 and the relevant text on page 45.

Reilly discusses a couple of types of 1816 style bayonets that was altered with the addition of a locking ring (Figures B62 and B63) and mentions correspondence from Lancaster, PA gunmaker Henry Leman to the Secretary of War, Edwin M. Stanton.  In the correspondence Leman discusses the altering of flintlock muskets and rifles to percussion and also talks about modifying M1816 style socket bayonets. He includes drawings in his letter that depict bayonets altered in the manner of the bayonet offered here. The purpose of the modifications are not clear, as the Ordnance Department was producing US M1816 “Replacement Bayonets” during this period, using the current pattern M1855 blade and the older M1816 pattern socket. These newly produced bayonets were of the original friction-fit pattern and did not include a locking ring. Why Leman had been asked to add one, or why he felt it was necessary is not clear. Although it has been theorized that these bayonets were likely intended for use with the various M1816 pattern muskets that Leman was altering to percussion, they may have also been intended for use with some of the M1841 “Mississippi” Rifles that Leman modified. The presence of the new, taller bridge certainly suggests use on a gun other than an M1816 musket.

During the Civil War, Leman modified some 2,352 M1841 “Mississippi” Rifles for the state of Pennsylvania. These guns were re-bored to .58 caliber and re-rifled with three lands and grooves. The barrels were also turned down for slightly less than 3” at the muzzle. This was to allow the fitting of a socket bayonet to the rifles. The most commonly encountered version had a lug added under the barrel for the attachment of a standard US M1835 or M1835 Replacement bayonet. George Moller notes that at least 1,012 of the rifles were altered to accept these socket bayonets. Many rifles were also left without the provision to accept a socket bayonet. However, at least a handful of the Leman altered rifles appear today with a lug on the top of the barrel, and these appear to have been modified to accept a US M1816 socket bayonet. These Leman altered rifles were serial numbered on their buttplate tangs, and it is generally believed that the bayonets were marked with matching serial (mating) numbers.

The bayonet offered here is a classic example of a Leman Altered US M1816 Bayonet. As noted, the bayonet is also illustrated as figure B63 in Robert Reilly’s book. The bayonet does not have the usual “US” mark on the face of the blade at the ricasso, but rather is marked with a B at the shank to blade junction and with a small J inspection or maker’s mark about ¼” from the shank. The bayonet is additionally marked with the alphanumeric mating number XT5, stamped on the obverse shank. More than likely this mating mark would have matched the bayonet to the rifle it had been fit to.

The bayonet is in about VERY GOOD+ condition. The bayonet has a lightly cleaned pewter-gray patina with scattered oxidized freckles of surface discoloration on the blade with the socket being somewhat more evenly oxidized towards brown. The metal is mostly smooth with some small, scattered areas of light pinpricking and minor surface roughness. There is also a tiny forging flaw present at the tip of the bayonet that appears to be only on the surface and is about 3/8” long. The original, Leman added locking ring and tension screw remain in place and function smoothly, supported by the added shoulder and the stop pin. The bayonet remains full-length with a 16” blade that has an 8 ¾” fuller and a 3” socket. The socket remains close to the nominal 1816 bayonet bore dimension of .830” and measures .826”. The muzzle-to-stud distance of the bayonet is a relatively short .85”, about ¼” shorter than the standard muzzle-to-stud distance of an 1816 pattern bayonet. The original 1816 mortise cut would have stopped about where the front edge of the locking ring is now, so the mortise cut was extended towards the muzzle to allow the stud to be secured between the cut and the ring. The front edge of the socket is very slightly out of round, but the damage does not appear sufficient to keep the bayonet from mounting on the appropriate gun.

Overall, this is a rare bayonet would be a fine addition to any advanced collection of Civil War bayonets and would be a wonderful accompaniment for a Leman altered Mississippi rifle with a top lug, or a similarly altered M1817 Common Rifle by Leman. Over the years I have only ever seen a couple of these scarce bayonets for sale, so this is good opportunity to add one of these fairly scarce socket bayonets to your collection.