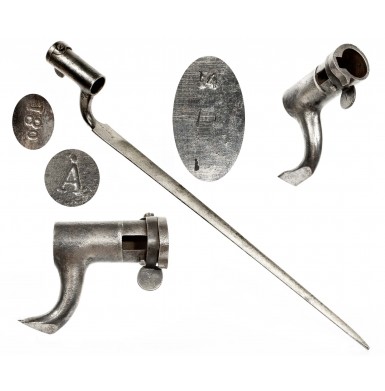 Offered here is a scarce example of a Model 1841 Grand Duchy of Saxe-Weimar Socket Bayonet. These bayonets were first correctly identified and described in the book European Bayonets of the American Civil War by David Noe and Joe Serbaroli. The section on this pattern of bayonet appears on pates 128 and 129, where the pattern is described and pictured. The authors note that during the research for their book they could only locate ten examples to examine in the United State, despite their access to major institutional collections and the collections of all of the member of the American Society of Bayonet Collectors. The authors note that the bayonet was designed for use on the Saxe-Weimar Model 1841/43 Musket and the Model 1842/54/57 Rifle.

The Saxe-Weimar M1841 Bayonet is somewhat unique with an unusual spring catch at the rear of the socket that is operated with a large, flat round thumb tab. The catch works in concert with a more traditional Prussian style eccentric rim on the rear edge of the socket. The bayonet also has a short, straight mortise cut in the rear edge of the socket, mortised for a bottom stud, that terminates in a reinforcing ring that only surrounds about half of the socket. The bayonet appears to be based on the French AN IX and alter M1822 bayonets, with a fluted triangular blade that terminates in a set of sharp shoulders at the shank. As described by Noe & Serbaroli, the bayonets were nominally 19” in overall length with 16” blades, 2 ¾” sockets and a nominal bore diameter of .84”. The authors postulate that the bayonets were Belgian made, as PJ Malherbe produced both the muskets and rifles for the Grand Duchy of Saxe-Weimar. They note that all ten examples examined in researching their book had a serial or mating number on the obverse of the shank and the reverse of the shanks and the blade faces showed a number of different markings. They explain that at least some of the M1841/43 muskets were imported during the American Civil War, likely lumped in with other “Prussian” musket deliveries. They further note that a few M1841/43 muskets are known with OHIO ownership stamps in their stocks, confirming their presence on these shores during the war.

The Model 1841 Grand Duchy of Saxe-Weimar Socket Bayonet offered here is in about NEAR VERY GOODcondition. The bayonet conforms to the dimensions provided by the authors, with a nominally 16” blade that is .95” wide with a 14.25” face flute. The socket measures 2.69” in length and has a nominal bore diameter of .86” and a muzzle-to-stud distance of 1.62”. The bayonet is mating numbered 180 on the obverse shank, only 8 numbers from one of the bayonets listed in the book, which was #188. This is a new number, not on the Noe & Serbaroli list. The reverse of the shank has a small C in a circle mark and the blade face has a not completely decipherable mark that appears to be I4. The original spring catch is in place on the rear of the socket and the thumb catch is marked with a large A.

As noted, the bayonet is in about NEAR VERY GOOD condition. The metal appears to have been lightly cleaned at some point in time, leaving a dull smoky gray patina over much of the bayonet with some areas of darker metal and some scattered oxidation. The socket shows light to moderate pitting and some very dark gray patches of discoloration. The blade is mostly smooth with scattered freckles of discoloration and oxidation, some pinpricking around the base of the blade and some lightly scattered pinpricking and peppering along the blade towards the tip. As noted, the bayonet retains the original spring catch at the rear of the socket, as well as the eccentric collar ring. There are a couple of minor dinged bends along the edges of the blade, but these are not serious and do not affect the ability of the bayonet to be used or mounted on a musket.

Overall this is a nice, complete and solid example of a very rare Germanic states socket bayonet that pre-dates German unification and that saw some limited use in the American Civil War. This would be a fine addition to any advanced Civil War bayonet collection, a collection of pre-Imperial German bayonets or as an addition to your Grand Duchy of Saxe-Weimar M1841/43 musket or M1842/54/57 rifle. This is the first one of these rare bayonets that I have seen for sale and it may be a very long time before another one appears on the market.