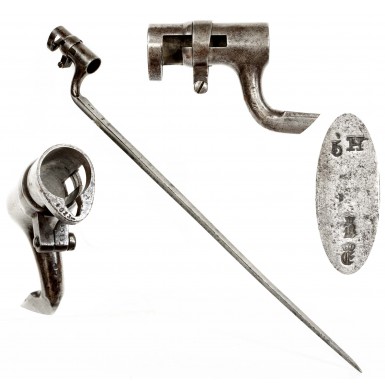 The bayonet adopted for the M62 Rifle was of the socket patter with a long, narrow triangular blade. The bayonet was nominally 22 3/4” in overall length with a 2 ¾” socket and a nominally 20” triangular blade with a shallow fuller that ran most of the blade’s length. The blade was only .65” wide and was moderately fluted on the two reverse angles of the blade. The bore diameter of the socket was nominally .855” and the muzzle to stud distance was slightly under 1”, typically around .95”.

The example of the Prussian M62 Socket Bayonet offered here is in about VERY GOOD condition. The bayonet has a medium gray patina with scattered patches of freckled oxidation and mottled age discoloration over all of the surfaces. The face of the blade is clearly stamped with a pair of Prussian acceptance stamps near the shank junction with an additional added mark that reads 5 H. This mark might indicate the bayonet was issued to the 5th Hussars. The bayonet is additionally marked 4013 on the rear edge of the socket, possibly the serial number of the rifle that the bayonet was mated to. The bayonet blade is full length and shows a couple of areas of waviness and minor bends, likely from use in the field. The metal is mostly smooth with some scattered surface crust and minor roughness here and there, mixed with some pinpricking in the oxidized discoloration and some small patches of light pitting scattered along the bayonet. The original locking ring is in place and remains fully functional, operating smoothly as it should.

Overall this is a solid example of a relatively scarce pre-Imperial Germany Prussian socket bayonet that is not regularly found for sale in America. This would be a nice addition to any collection of Prussian or early German bayonets and would be an equally nice addition to the display of your Prussian M62 Needle Rifle. I’m sure you will be happy to add this bayonet to your collection.