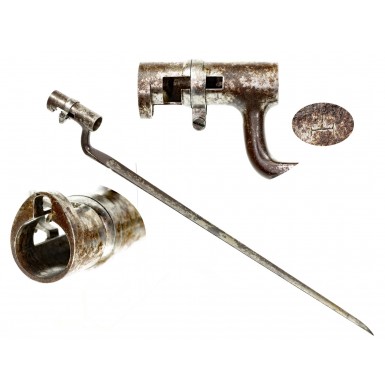 This is a GOOD to NEAR VERY GOOD condition example of the US Model 1860 Spencer Repeating Rifle Socket Bayonet (Reilly B109). As is typical of Spencer bayonets, it is completely unmarked, except for a small inspectors’ mark. In this case it is a letter H just forward of the end of the mortise cut on the socket of the bayonet. Other inspector letters that are sometimes encountered are “M” and “L”, which are fairly common, with the “H” mark only occasionally found on surviving examples. The only features that make it readily apparent that it is a Spencer bayonet is the socket which is slightly larger than a standard US Model 1855 bayonet’s socket. The Spencer bayonet has a nominal .812” bore diameter, while a standard M1855 bayonet has a .783” bore diameter. The Spencer bayonet also has a higher than normal bridge at the rear of the socket, which is necessary to clear the Spencer rifle’s taller front sight blade. In all other ways, the bayonet has the appearance and dimensions of the standard Type I M1855 .58 caliber socket bayonet.

The bayonet is full-length with an 18” blade and a 3” socket and retains its original locking ring and tension screw. The locking ring functions smoothly and correctly. The bore diameter measures .815” and the height of the bridge measures 1.12” at the tallest point. These dimensions identify this as a Spencer Rifle socket bayonet, in addition to the inspection mark on the socket. The bayonet has a thickly oxidized dark brown patina scattered over about half of the metal surfaces of the blade. The thick patina is most even along the first 8” or so, running from the shank towards the tip. The mottled patina is more freckled and scattered on the socket and along the last 9” to 10” of the blade, closer to the tip. My guess is that the bayonet spent most of the post-Civil War period in a leather scabbard, which may have gotten damp. This resulted in the thickly oxidized patina over about half the blade. The difference in patination could be the result of the scabbard fitting more tightly at the wider parts of the blade or possibly because it was a partial scabbard and completely intact. Although the patina is thick and dark, most of it is relatively smooth with some minor surface roughness and light crusting, but only a few patches of real pitting. These are primarily along the face of the blade in the fuller, with the most notable one being a thumb-print sized patch about 8” from the shank. As would be expected of any socket bayonets, there are also some lightly scattered minor impact marks here and there. These minor impact marks are typical and regularly appear on socket bayonets that saw actual use in the field.

The mostly dark appearance of the bayonet would make it a good addition to your attic condition Spencer Rifle. This bayonet would be a very good compliment to a nicely oxidized and untouched example. This is a solid example of a fairly scarce Civil War socket bayonet in nice, complete condition, with a scarce but legible inspection mark on the socket and at a reasonable price for a Spencer Rifle Socket Bayonet.