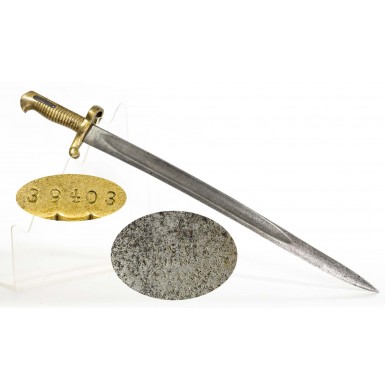 This is a solid example of a Civil War era brass handled saber bayonet by Ames, for use on the Sharps Model 1859 Rifle. The obverse ricasso appears to be undated. The reverse ricasso has the three line Ames mark which: AMES MFG. Co / CHICOPEE / MASS. The mark is weak and hard to read due to pitting on the blade. The top of the brass grip is numbered 39404 to mate the bayonet to the Sharps Rifle it had been fit to. The closest serial numbers to this one that are listed in the Springfield Research Service serial number books are a group of Sharps Model 1859 Rifles that were issued to the 5th Michigan Volunteer Infantry, specifically companies I and K. The two closest numbers on either side of this bayonet, listed in the books were #39335 and #39687, both of which were 5th Michigan rifles. However, the serial number range and the fact that this bayonet was intended for a gun with the saber bayonet lug rather than the more common socket bayonet lug, suggests that it may have been a bayonet for the Sharps Rifles contracted for by the US Navy during 1861. These guns are known as “Mitchell Contract” Sharps Naval Rifles and were identical to the usual .52 caliber Sharps M1859 Infantry Rifle but were equipped with the saber bayonet lug, rather than the socket lug. These guns appear distributed in the 39,XXX through the lower portion of the  4X,XXX serial number range.

The bayonet measures 24 7/8” in overall length, with a 4 7/8” long brass hilt that has seventeen grooves cast into it. The muzzle ring is plain, and the lower quillon is forward swept with a disc at the end. The blade is 20” in length, with a 13 ¼” long fuller that is 7/8” wide at the widest point. The muzzle ring diameter of the bayonet is nominally .815” which is the correct nominal diameter for a Sharps rifle. The hilt is cut for saber bayonet lug that had a guide key and has a 1.35” long primary mortise with an additional narrower .9” keyed mortise extension.

The bayonet remains in about GOOD+ condition overall. The blade has a mottled pewter patina with scattered darker gray discoloration and surface oxidation scattered evenly over all its surfaces. The surface of the blade shows equally evenly distributed light pitting all over, with some areas of more moderate pitting as well. The pitting at the ricasso has partially obscured the Ames mark on the reverse ricasso, as well as any date that might have been on the obverse ricasso. The hilt has a nice, mellow, golden color that suggests it might have been cleaned at some point in the past and is now toning down some. The original spring catch is in the hilt and is fully functional. It retains some of its original blued finish but shows even pinpricking over the entire spring. These days even mid-grade Sharps rifle saber bayonets are selling in the $500+ range, and fine ones are bringing significantly more. This is a 100% complete and original Model 1859 Sharps Rifle Saber Bayonet in good, solid, displayable condition that is priced much more reasonably than any of the other examples on the market.