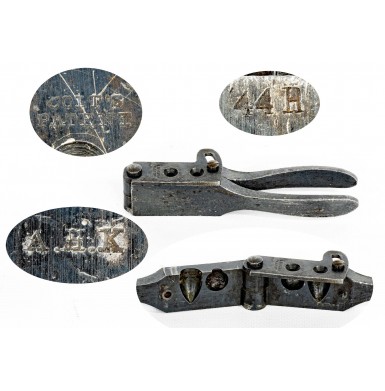 This is a FINE condition Colt Model 1860 .44 Bullet Mold, which has been inspected and approved for US military service. It is the typical “bow-legged” blued iron, dual-cavity .44 caliber mold, which casts one conical and one round ball. These molds are listed as M28 on page 249 of Robin J. Rapley’s Colt Percussion Accoutrements 1834-1873. This is a martially marked example with a set of inspector’s initials on the right side of the mold. The right side has the usual Colt caliber markings, 44 H near the hinge. On the same side of the block, down near the handle, are the inspector’s initials A.H.K, which are the mark of US arsenal civilian contract sub-inspector Albert H. Kirkman. According to my references, Kirkman worked from 1862 to 1865, and his mark can also be found on Ames manufactured US M1840 Musicians Swords, US M1840 NCO swords and some Sharps M1863 carbine barrels.

The mold is in about FINE condition, as previously noted. The exterior retains quite a bit of the original blued finish, possibly as much as 50%-60% with the left side retaining more than the right side. The areas where the finish has worn of faded now has a mostly dull pewter patina, although some scattered surface oxidation and age discoloration is present on the metal. The exterior of the mold shows numerous scuffs, scrapes and scratches from service and use. The interior of the mold is even nicer and retains about 75%+ of its original blued finish. The mold cavities are in very nice condition and retain sharp edges and good lines. The mold would probably cast very nice bullets if it were used today. The original iron locator pin is present on the right side of the mold, and the two halves move smoothly and join tightly. The original sprue cutter is in place on the top of the mold and is still clearly marked in two lines: COLT’S / PATENT. The mark is crisp and clear and fully legible. The exterior of the sprue cutter retains much of its original blue, probably as much as 70%, with some surface oxidation, discoloration and surface roughness that is primarily along the left edge of the cutter.

Overall this is a very nice example of a relatively scarce martially marked .44 Colt Model 1860 “Army” bullet mold. While regular .44 Colt molds are fairly common, the US military inspected examples are rather rare. This one is in much better condition than they are normally found in and would be a great addition to a collection of Civil War bullet molds, or to display with your martially marked Colt Model 1860 Army revolver.