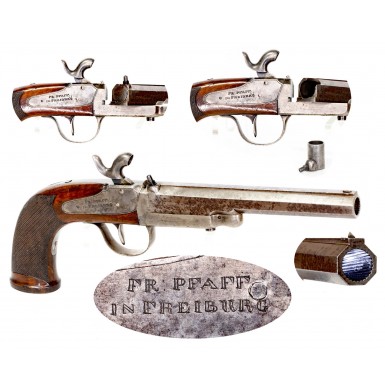 This is a very attractive example of a well-made and well-designed mid-19th century German Swivel Breechloading Percussion Pistol. The gun is unmarked other than the back action lock which is engraved in two lines:

None of my references, including Heer der Neue Stockel list a gunmaker name Pfaff in Frieburg (Baden Germany), but at least two families of Pfaff gunmakers worked during the 18th & 19th century, one family in Hesse-Kassel (Germany) and the other in the Caton of Basel-Landschaft in modern day Switzerland. As Basel-Lanschaft is only about 60 miles from Frieburg, it is most likely that the gunmaking family in Basel-Lanschaft was the family responsible for this finely crafted pistol.

The gun is nominally 12” in overall length with a 6 3/16” octagonal barrel that is nominally 12mm (about .45 caliber) and rifled with 28 narrow lands and grooves with a rather quick rate of twist. The pistol operates on a pivoting breech principle with the breech of the barrel pivoting to the right when a push button under the frame is pressed, exposing the chamber for loading. The pistol uses a percussion chamber insert device that is similar to the “chimney device” used to fire conventional percussion ammunition from a pinfire gun. The removable chamber has a percussion cone that extends through a groove in the frame, allowing the hammer to strike it and ignite the charge. The removable insert is designed to accept the power charge, thus providing a built in measure for the amount of powder needed to fire the pistol. After the hammer was placed on half-cock, and the breech pivoted to the right, the chamber insert was removed, and a bullet was placed in the chamber. Then the insert was filled with powder and placed back in the breech of the pistol. Once the breech was closed, all that was needed was to place a cap on the cone, place the hammer on full cock and then pull the trigger to fire the gun.

The pistol is extremely well made and well machined with a  color casehardened frame, lock, hammer and triggerguard. The octagonal barrel was apparently browned, and the trigger plate and trigger are blued. The checkered walnut grip has a flared, flat oval pommel cap with an oval bone insert that measures roughly 1 1/8” x ¾”. The gun shows significant French influence as the grip shape and form is similar to French officer’s pistols of the 2nd and 3rd quarter of the 19thcentury. The back action lock and rifling pattern also show French influence. The back action lock is somewhat unique in that the hammer is located inside the lock plate, rather than on the exterior of the lock plate. As noted, the only markings on the gun are the two engraved lines on the lock plate. The pistol is equipped with a set of small rudimentary sights, with a small fixed notch rear sight mounted on the front of the frame, immediately behind the breech and a fine dovetailed front sight mounted about 1/8” of an inch from the muzzle.

The pistol is in VERY GOOD+ condition and is in very crisp condition. The frame and lock retain some strong traces of the original color casehardened finish, particularly on the top of the frame. The edges and surfaces all remain crisp and sharp as does the lock marking and simple boarder line engraving around the edge of the lock. The browned barrel retains some small traces of brown and has a mottled gray and brown patina with some surface oxidation and some very lightly scattered pinpricking. Some small areas of minor oxidized surface crust here and there. Like the lock and frame, the edges of the barrel remain crisp and sharp. The pistol remains in excellent mechanical condition and the swivel breech system operates exactly as it should with tight and secure lock up. The firing mechanism works perfectly as well. The bore is about very good as well. It retains crisp, “micro-groove” style rifling, but does shows scattered light oxidation along its length with some scattered pinpricking and a couple of small patches of light pitting. The checkered walnut grip is in about fine condition and retains crisp checkering throughout. The wood is solid, complete and is free of any breaks or repairs. The grips shows some scattered light handling marks and minor mars but shows no abuse or damage. The wood shows absolutely no indication of having been sanded in any way.

Overall this is a very interesting, attractive and intriguing mid-19th century German-made pivoting breech percussion single shot pistol. The gun is extremely well made, and would no doubt be a  very accurate pistol. The design concept is certainly worth some additional research. The quality of the gun alone should make it an attractive addition to any collectable firearms collection, considering the strong eye appeal and relatively low price for the quality and condition of the gun.