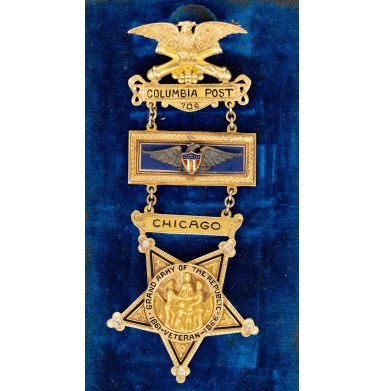 This is a lovely example of a very high grade, 14kt gold and diamond embellished Grand Army of the Republic badge, inscribed to a past commander of G.A.R. Columbia Post #706 in Chicago, Illinois. The ladder style badge is marked 14K on the bottom rear of the traditional G.A.R. star-shaped emblem. The inverted 5-pointed star measures 1.865” across opposing tips at the widest point and has black enamel highlights that encircle the central image and line the inner edges of the star’s points. The exterior of the central circle has the traditional G.A.R. marking, which reads: GRAND ARMY OF THE REPUBLIC 1861-VETERAN-1866, also in black enamel. The tips of the star are set with tiny, mine cut diamonds. The upper points of the star are permanently attached to a banner that simply reads CHICAGO. The main portion of the badge is suspended by two small links from a gilt and enamel representation of a colonel’s shoulder board, with a spread-winged eagle as the central image with Columbia’s shield emblazoned on its chest. The shield has red, white and blue enamel details and the background of the piece is of blue enamel, suggesting the shoulder board is for an infantry colonel. This piece is further suspended by two small links on each side from a pin-backed gilt hanger that shows a spread-winged eagle surmounting crossed canons, a sword and cannon balls, with a banner that reads COLUMBIA POST / 706 beneath its talons. The overall length of the badge is slightly more than 4.5”. The badge weighs roughly 1.72 oz and has an approximately melt-weight value of about $1,700 in today’s gold market. The badge is contained in its original textured black leather case with a dark blue velvet interior. A detached thread bear American flag hanging ribbon (not pictured) is contained in the case as well. The case shows moderate wear, surface scuffing and some finish loss, with the closure button ripped out of the smaller side of the folding front. The badge itself is in VERY FINE condition with some light wear and minor loss to the applied enamel. The discoloration visible on the rear of the badge in the photos is the result of reflection and is not present on the badge. The rear of the star shaped badge bears the following jeweler-engraved 7-line presentation:

A check of the Illustrated Roster of the Department of Illinois Grand Army of the Republic printed in 1914 reveals that “R.F. Wilson” was Robert F. Wilson, a member of Columbia Post #706 and a former member of the 1st West Virginia Cavalry.

Robert Finely Wilson was born on March 8, 1844 in Monongahela, Washington County, Pennsylvania. He was a descendant of Revolutionary War veteran William Hamilton, through his mother Sarah Hamilton. The 1860 Census showed Robert was living with his family in Monongahela City, Washington County, PA. His mother Sarah was the head of the household with a personal estate valued at $1,000 (slightly more than $31,000 today) and he lived with four brothers and sisters; Joseph (21), Margret (19), William (17) and Sarah (7). The Historical Data Systems database shows that Robert enlisted in what would become the 1st West Virginia Cavalry on July 1, 1861. At that time, West Virginia did not exist, and he was actually joining the Company N of the 1st Virginia Mounted Volunteers, a pro-union regiment. Wilson's company was eventually redesignated as Company I of the 1st West Virginia Cavalry. Copies of Wilson’s muster and service records are included and are somewhat confusing. It appears that he officially “joined” N Company of the 1st Virginia Mounted Volunteers as a Corporal in Wheeling on August 30, 1861 for a period of 3 years, but was not officially “mustered” into service until November 18 of that year in Clarksburg, VA. He was listed as being 18 years of age  but was only 17 at the time. His older brother Joseph would be commissioned as a lieutenant in the same company in the fall of 1861 as well, and would also be shown on the muster sheet as a year older than he actually was. The regiment was organized in Wheeling, as well as Clarksburg and Morgantown during the period of July to November of 1861. All of these cities were in Virginia at that time, but would eventually be in the newly formed state of West Virginia. The regiment saw service during the latter part of 1861 in small groups and detachments, prior to being fully organized. The men were primarily deployed in western Virginia, in the Unionist region that would become West Virginia officially 1863. Their first major actions took place in the summer of 1862, when they saw combat at Cross Keys, Port Republic and Cedar Mountain. In the fall they were engaged at Chantilly, VA leading up to the Antietam (Sharpsburg) campaign, and afterward at Ashby’s Gap, VA.  In the summer of 1863, they saw combat at Winchester, VA, Hanover, PA and Gettysburg, PA. At Gettysburg the regiment served in Farnsworth’s Brigade as part of Kilpatrick’s Calvary Division. Following the battle, the 1st WV Cavalry were involved in the pursuit of Lee’s retreating army that culminated at Falling Water. The regiment saw significant scouting and skirmishing through the fall of 1863 primarily in northern Virginia and through the Shenandoah Valley and they participated in the Mine Run Campaign of late November and December of that year. 1864 saw similar service, much of which was in West Virginia, including skirmishes and some more serious fighting in Virginia at Bunker Hill, Winchester, Fisher’s Hill and Mount Jackson, just to name a few. The fall of 1864 saw the regiment at Cedar Creek, as well as other localized actions. In early 1865 the regiment was a component of Sheridan’s Valley Campaign that originated at Winchester on February 25 and continued for some 30 days. The regiment was part of the Appomattox Campaign that chased Lee’s Army from the trenches of Petersburg to their final surrender. During that campaign the regiment was engaged at Dinwiddie Courthouse, Five Forks, Sailor’s Creek and Appomattox Station. The regiment then ordered to North Carolina in pursuit of the remnants of Joseph Johnston’s Army of Tennessee and was honored with an appearance in the Grand Review in Washington to celebrate the defeat of the Confederacy and salvation of the Union.

Robert F. Wilson’s somewhat confusing military records initially show an official “mustering in” on November 18, 1861, while his is listed as joining the regiment on August 30 of that year. He is shown as “present” through all of 1862 and 1863 and on December 31, 1863 is officially discharged “by virtue of re-enlistment”, which he did on December 23 of 1863 in New Creek, VA. At this time, he willingly signed a new set of 3-year enlistment papers. 1864 was a more difficult year for Robert, as it was for nearly everyone serving on either side during the Civil War, although it started well enough. His reenlistment entitled Robert to a bounty and a “Veteran’s Furlough” and he is listed as “absent” on his veteran’s furlough for January and February of 1864. The March muster rolls show Robert back with his regiment and also list him as a sergeant. He is present from March to June and the notation at the bottom of his July-August muster card notes that his “Pay due him as Sergt. From Jan. 1/64 to July 30/64.” The same notation appears on his September-October muster card. Another card notes that as of March of 1864 he was “acting Quartermaster Sergeant.” During this period the card also notes that he was absent from active field service due to a “broken down horse.” Interestingly the July-August card lists him as a private, not a sergeant, so something went wrong between June and August of that year. This becomes clearer with an August 8, 1864 dated card from the Provost Marshal of Pennsylvania. It notes that on July 30, 1864 Wilson had deserted and was subsequently arrested on August 6. The remarks section notes: “Says he was told by the commanding officer when he was wounded that he might go home to recover. He done so without written orders.”Apparently, Robert was wounded in the  “slightly” in the leg during the beginning of a campaign in the Shenandoah Valley that ran from July 18 through October 22, 1864. After the injury he “deserted” from Winchester, VA, heading home to recuperate. It was there he was found in early August and returned to service. Apparently, this was seen as more of a misunderstanding than real desertion, as the punishment for the offense appears to have been his loss of rank, being returned to the ranks as a private from his role as acting Quartermaster Sergeant for the company. On December 1, 1864 Robert Wilson he was “promoted to Corporal from ranks,” returning him to his original rank at enlistment. January and February of 1865 show that Corporal Wilson was “absent on recruiting service.” Robert was officially mustered out of service on July 8, 1865. At that time, he was due $11.24 from the US government, after the deduction of $8.22 for his “Colt’s Army Pistol”, which he apparently decided to keep and take home with him. It appears that Robert initially returned home to Pennsylvania but then moved to the Chicago area. There he joined G.A.R. Post #706, eventually reaching the post of Commander. According to the 1900 Census, he was 56 years old, living in the 11th Ward of Chicago and working as a “contactor”. Wilson died at the ripe old age of 81 on January 27, 1926 and is buried in Forest Park Cemetery in Cook County, Illinois.

Overall this is a wonderful, 14kt gold and diamond G.A.R. badge that belonged to a very interesting man. He followed the strength of his conviction and fought for the Union, joining a Unionist Virginia mounted regiment that became a West Virginia cavalry regiment. He was present for some of the most important battles of the war from Antietam to Gettysburg, was promoted to sergeant, wounded in the Shenandoah Valley and fought his way back to corporal after being charged as a deserter and arrested. Further investigation and research might reveal even more about this remarkable man. Copies of service records downloaded from Fold3.com and some relevant 1st West Virginia Cavalry history is included with this wonderful G.A.R. medal.