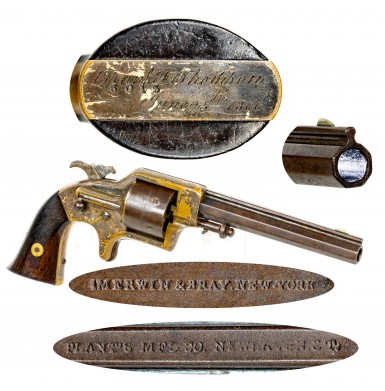 This is a VERY GOOD condition example of the .42 caliber “cup primed”, large frame or “Army” size Plant’s Manufacturing Company Front-Loading Revolver, inscribed to Frank Thomson on his wedding day; Thomson would eventually become the President of the Pennsylvania Railroad and was a luminary of his era who counted Buffalo Bill Cody among his friends. The butt of the revolver is engraved in two lines and reads:

Frank Thomson was born on July 5, 1841 in Chambersburg, PA. According to his New York Times obituary his father was a judge, a professor of law at Marshall College and a member of Congress. Young Thomson attended the Chambersburg Academy and went to work for the Pennsylvania Railroad early in his life, following his love to trains to the Altoona shops of the railroad where he received a four year education “obtaining a practical and scientific knowledge of mechanical engineering.” According to the obituary, the General Superintendent of the Pennsylvania Railroad, Colonel Thomas A. Scott discovered the young Thomson and recognized his innate talent for all things related to the railroad and for all practical purposes became the young man’s mentor. During the American Civil War, Scott was appointed as the Assistant Secretary of War under Simeon Cameron and Frank Thomson served as the Chief Assistant to the Assistant Secretary of War. Scott was instrumental in modernizing, expanding and standardizing the railroads in the north and occupied territory in the Confederate south and also advised the administration on a variety of matters related to transportation, communications and logistics. Frank Thomson was at Scott’s side through all of this, learning valuable skills and working with the most powerful Union leaders of the Civil War era. Scott would eventually become the 4thPresident of the Pennsylvania Railroad. By June of 1864, Thomson was appointed the Superintendent of the Eastern Division of the Philadelphia and Erie Railroad, a position of great responsibility for a man only 23 years of age! In 1873 he was promoted to Superintendent of Motive Power at the Pennsylvania Railroad in Altoona and the following year was made the General Manager of the Pennsylvania Railroad east of Pittsburg and Erie. During this time, he worked tirelessly to standardize and modernize track, to institute safety procedures and systems and introduced the use of the block signal to the railroad. On October 1, 1882 he became the number three man at the railroad, being promoted to Second Vice President and in 1888 was made First Vice President. In 1897, Thomson became the 6th man to become president of the Pennsylvania Railroad and continued his programs of standardization, safety implementation and organizational efficiency. The only business avocation Thomson pursued outside the railroad was as a director of the Equitable Life Assurance Society. The firm which was founded in 1859 remains in business today and during the period of Thomson’s tenure on the board such famous “Robber Barons” as J.P. Morgan, E.H. Harriman and Henry Clay Frick served in the same capacity as well.

Although Thomson’s professional life was a proud legacy in itself, he also led an interesting personal life. He married his wife Mary Clarke on June 25th, 1866 and they had several children, including Benjamin who died young, Alexander who did not survive to adulthood, Annie, Frank and Clarke. His two surviving sons went on to attend Harvard. Thomson was an avid outdoorsman and hunter in the mold of other men of the period like Theodore Roosevelt. In 1871, he was assigned to chaperone Russian Grand Duke Alexis during his tour of the United States. The highlight of this trip was a western expedition and hunting trip that included none other than William F. “Buffalo Bill” Cody, a man who would remain friends with Thomson for the rest of their lives. Thomson’s exploits and shooting skills were instrumental in attracting the rich and famous from around the world who came to spend time at Thomson’s “Corkerhill” hunting estate in Merion, PA. There they enjoyed the life of late Victorian sportsman and the great outdoors. It was at his beloved Corkerhill that Thomson died on June 5, 1899 at the young age of 57. A copy of the New York Times obituary of Thomson is included with the revolver.

It is not clear who gifted this Plant Army revolver to Thomson, but the inscription certainly indicates that it was given as a wedding gift. These six-shot, solid frame, front loading single action revolvers, were produced by the Plant’s Manufacturing Company of New Haven, CT. Approximately 8,000 of these revolvers were produced during the mid-1860s, firing their proprietary patented “cup primed” cartridge. The Plant’s Manufacturing Company was financed by the New York based firm of Merwin & Bray, who also acted as the sales agents and exclusive distributor for Plant’s products.

This particular revolver is a Third Model revolver, which were produced in the 700-8000 serial number range. The 3rdModel guns were made in two types, the majority were the standard or “Heavy Framed” version in the 700-6800 serial number range, with the last guns produced with a lighter, thinner frame and a “pinched” site groove in the top strap. These “Light Frame” Type II 3rd Model guns were produced in the 6800-8000 serial number range. These guns had a slightly lighter, narrower frame with a narrower ejection groove on the right side of the frame, forward of the cylinder and a “pinched” sighting groove in the top strap that narrowed at both ends. Most of the Plant “Army” sized revolvers were manufactured with silver plated brass frames, with the exception of about 150 later 1st model guns and about 450 2ndmodel guns. All of the pistols were single action revolvers with a sheathed spur trigger. The cylinder and ribbed octagon barrel were blued, with 6” being the nominal barrel length, however variations are known from about 5” through 6” and are somewhat common. The grips were two-piece, secured with a single screw through a pair of brass escutcheons and were made of either varnished walnut or rosewood. The grip panels were typically stamp-numbered to the gun on their interiors. The unique “front loading” cylinder design was an attempt to evade the Rollin White “bored through cylinder” patent, which Smith & Wesson held the rights to. A manual ejector rod was mounted on the right side of the frame, which was used to push empty cartridge casings out through the front of the cylinder’s chamber mouths. The gun was about the same size as Colt Model 1849 Pocket revolver but was much easier to reload and packed more firepower into the same sized package. As a result, the Plant’s Manufacturing Company Front Loading “Army” Revolver became a popular choice for the armed citizen and military officer of the mid-1860s. The robust design was much stronger than direct competitors like the Smith & Wesson #2 “Old Army”, and the .42 cartridge packed more punch than the Smith & Wesson in .32 rimfire.

This example of a Type I Third Model Plant “Army” Revolver is in VERY GOOD condition overall. This is the later production 3rd Model gun with the “Heavy Frame”, but with the pinched sighting groove and narrow ejection groove of the even later Type II guns. The bottom of the brass grip frame is serial numbered 6015 and the matching serial number is stamped inside both of the rosewood grip panels. The top rib of the barrel is marked in a single:

The left side of the barrel is stamped with the mark of the distributor and reads:

The cylinder is crisply and clearly marked in a single vertical line:

The 5.5” ribbed octagon barrel retains traces of the original blued finish, primarily in the protected areas around the barrel rib and near the frame. The balance of the barrel is a moderately oxidized plum brown patina that is mostly smooth, although some scattered pinpricking and some minor pitting is present here and there. The cylinder shows the same mostly smooth plum brown patina as the barrel. The cylinder is mostly smooth as well but does show some lightly scattered surface oxidation as well as some minor pinpricking, primarily around the chamber mouths. The color casehardened hammer has faded and dulled with a muted, mostly dark, mottled grayish-brown patina. The brass frame retains about 20%+ of the original silver plated finish which is heavily tarnished and has an overall dark patina. The plating shows thinning, wear and loss commensurate with the balance of the revolver. The exposed brass has a lovely, dark, uncleaned butterscotch patina. The pistol functions perfectly and is in mechanically excellent condition. The gun times and locks up perfectly and the frame mounted ejector rod functions smoothly, exactly as it should. The bore of the revolver is in about GOOD+ condition. It is mostly dark and moderately oxidized but retains strong rifling. The bore shows scattered light to moderate pitting along most of its length. The two-piece rosewood grips rate about VERY GOOD. They retain none of their original varnish and have had some added oil added to their surfaces. The grips are complete and solid, with no breaks, cracks or repairs noted. The grips do show some minor bumps, dings and bruises from carry and use but show no abuse or excessive wear.

Overall this is a VERY GOOD condition and an attractive displaying example of a desirable Civil War era metallic cartridge revolver. The gun is directly associated with one of the more important men of his era, a major player in the railroad industry and a contemporary of the great Robber Barons of the period. Frank Thomson was an avid hunter and outdoorsman who escorted the Grand Duke Alexis on his historic buffalo hunt with none other than Buffalo Bill Cody. It is entirely possible that this revolver accompanied Thomson on the plains during the hunt. These early cartridge guns are always intriguing, as they represent the tortured path that the firearms industry traveled during the Civil War period, moving from percussion arms to metallic cartridge arms. These early cartridge revolvers saw significant use with private soldiers and officers alike during the course of the war, and deserve to be included in any collection of Civil War Secondary Martial Revolvers, along with the Smith & Wesson #2 Old Army, the Moore’s Patent 7-shot Belt revolver, and all of the other early cartridge revolvers that were experimented with during that period. The fantastic history of the owner of the revolver and his historical association with the likes of Buffalo Bill make this a really important revolver of the Civil War and post-Civil War period that you will no doubt be very glad to own.