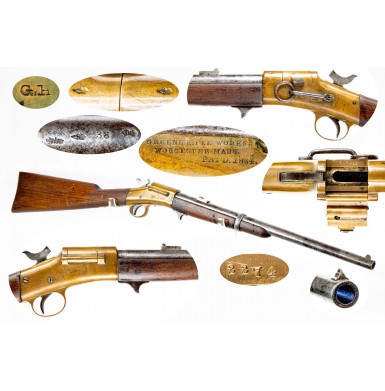 The Warner Carbine is a great example of the many styles of innovative, breechloading, metallic cartridge arms that were procured in relatively small numbers by the US Ordnance Department during the American Civil War. The Warner Carbine was the brainchild of James Warner of Springfield, MA. Warner had a long history of employment in the firearms industry and had at one time worked at Eli Whitney’s factory in Whitneyville, Connecticut, where he was involved with the production of the Walker pattern Colt revolvers that Whitney produced for Colt. He subsequently went to work for the newly formed Springfield Arms Manufacturing Company of Springfield, MA. Warner served as factory superintendent and sales agent for the company and contributed his designs in the form of several percussion revolving rifles. Springfield Arms Company also produced several models of percussion revolvers in a variety of calibers, some with manually revolved cylinders and some with self-rotating, single action lock mechanisms.

In 1864, Warner received two patents related to his newly designed carbine. The carbine was a single shot, breech loading, metallic cartridge gun. It had a brass frame, a 20” round iron barrel and brass furniture. The Warner holds the distinction of being the only brass frame carbine that was purchased by the Ordnance Department during the American Civil War, with the exception of the Henry, which was considered a repeating rifle. The carbine had a walnut buttstock and a separate “splinter” walnut forend that was secured with a single rounded iron barrel band and a single screw. The gun was chambered for a proprietary .50-rimfire cartridge and was loaded through a hinged breechblock on the top of the receiver. Warner’s patent of February 23, 1864 covered the loading aperture in the frame of his carbine. A second patent, issued on December 27, 1864 covered the firing pin in the breechblock that was struck by the hammer when the trigger was pulled. The hammer nose engaged a slot in the breechblock when it fell, which not only hit the pin, but also held the block closed while firing. Warner’s system was very simple, as the hinged breechblock was only held in place by the hammer nose and a small spring loaded catch on the left side of the hinged door. Placing the carbine on half cock allowed the block to opened by sliding the catch forward and pivoting the door up and to the right. Empty cartridges were extracted with the help of a manual extraction lever under the frame, similar to those found on Ballard rifles and carbines. The extractors were notoriously weak and often did not exert enough force to remove swollen cartridge cases from the breech. Apparently, Warner’s design looked good enough on paper that on January 13, 1864, the US Ordnance Department agreed to an initial contract for 1,000 of the carbines at $18.00 each. The order was received more than a month before Warner would be granted his first patent on the design. The sample carbine was delivered 11 days later, and the first 200 guns of the contract were delivered on March 31, 1864. Warner delivered 300 more on April 25 and the balance of 500 on June 23. Apparently, the Ordnance Department was sufficiently satisfied with the initial deliveries that in October of 1864 they accepted an additional 500 carbines and on December 7, 1864 they contracted for 2,500 more of the guns.

While the first 1,501 carbines had been manufactured by Warner’s Springfield Arms Company, the Greene Rifle Works of Worchester, MA, manufactured the guns for the second contract. The carbines produced by Springfield were in the original .50 Warner caliber, but the guns produced by Greene were in the newly adopted .50 Government Rim Fire caliber (.50 Spencer or “56-50”). There were some other changes as well. The troublesome extractor was modified in order to make it more functional, and the simple eye-bolt sling ring of the 1st contract carbines was replaced by a more conventional sling bar and ring.  The deliveries under this 2nd contract began on February 2, 1865, when the first 500 carbines were delivered. Additional deliveries were made on February 18 (500), February 27 (800) and March 15 (700). In total, Warner delivered of 4,001 carbines to the Ordnance Department in 15 months, a feat not matched by many patent arms manufactures that contracted with the US government during the Civil War. As deliveries of the new carbines were arriving, many of the first contract carbines that were on hand were returned to Warner to have their chambers reamed to accept the .50 Spencer cartridge. After the war, many more were modified, either while they were still in government inventories or after they were sold as surplus. As a result, any Warner that remains in its original .50 Warner RF chambering is extremely rare.

The majority of the Warner carbines were issued to two US volunteer cavalry regiments, the 1st Wisconsin Cavalry and the 3rd Massachusetts Cavalry. The 1st Wisconsin was formed early in the war and spent the first year or so in the Missouri area. They then joined the Union armies in Tennessee and participated in every major western theater engagement from the Tullahoma Campaign through Chickamauga, the Atlanta Campaign and the Nashville Campaign. The 3rd Massachusetts was a late war regiment that cut its teeth on the Red River Campaign in Louisiana and was subsequently transferred to the Eastern Theater where they participated in Sheridan’s Shenandoah Valley Campaign.

After the war, the Warner Carbines remained in limited use through 1867. This is almost certainly because they were chambered for a “standard” cartridge, the .50 Government Rimfire (.50 Spencer). Other patent carbines that were chambered for a less standard cartridge, as well as most of the percussion arms were simply considered obsolete and removed from service as soon as possible. The majority of the Warner Carbines were sold off to Schuyler, Hartley and Graham in 1870, when the firm purchased 2,492 of the guns and sold them to the French for the Franco-Prussian War. This is one reason that the guns are relatively scarce today. The remaining carbines were probably sold off to various retailers for resale to the public during the latter part of the 1870s. This no doubt accounts for the numerous extant examples that are found with checkered wooden stocks, an enhancement probably added by civilian retailers to make the obsolete guns more attractive and marketable as sporting arms.

Offered here is a VERY GOOD+ to NEAR FINE condition example of one of a 2nd Contract Warner Carbine often called a Greene-Warner carbine by collectors. The gun is serial number 2274. Assuming that the guns were delivered in close to their numerical serial number order, then this carbine was likely delivered as part of the February 18, 1865 shipment of 500 guns. This was the seventh delivery by Warner and represented the 2,001 to 2,501 guns delivered to that point.

2nd contract Warner carbines are typically marked on the left side of the brass frame, under the sling bar and this one is no different. The marking is clearly legible and reads in three lines:

While the 1st contract carbines are typically serial numbered on the bottom of the buttplate and assembly numbered under the breechblock for the early delivery guns, the later guns are serial numbered on the upper left edge of the receiver, under the breech block and under the barrel. As noted, this gun is serial numbered 2274 and this number is present in all three expected locations. In addition to the serial number and patent information the gun is marked with the inspector initials G.H on the tang of the buttplate. This is the mark of US arsenal sub-inspector George Haynes, who worked as an inspector for Springfield Arsenal circa 1863-1864. Interestingly, the recent publication U.S. Military Arms Inspector Marks by Anthony Daum & Charles Pate only noted Haynes’ mark on Ballard Carbine delivered during the middle and end of 1864. Apparently, Haynes also inspected at least some of the 2nd contract Warner Carbines. A weak H is also present along the toe line of the stock, behind the triggerguard tang. The gun also has a non-standard set of markings. Both the breechblock and receiver have a London commercial {CROWN}/V viewer’s mark, with barrel showing another London commercial {CROWN}/V view mark, a {CROWN}/GP proof mark and a London black powder mark. The barrel is also marked 38 in line with the proofs, indicating 38-bore or nominally .50 caliber. These proofs had to be applied when the gun was imported to England, but it is not clear when that happened. The gun could have been sold directly to Great Britain by one of the resellers like Schuyler, Hartley & Graham, or may have entered England as surplus after the Franco-Prussian War.

The carbine is 100% complete and correct in every way. The metal of the gun is mostly smooth throughout but does show a moderate amount of freckled surface oxidation that includes patches of surface roughness along both sides of the barrel forward of the forend. Most sources note that these carbines were delivered both in the bright and with blued barrels. There is no indication that this carbine’s barrel was ever blued. The barrel has a medium dull pewter-gray patina, with the scattered oxidation having a darker brownish-black color. The result is a mottled appearance on the metal. The bore of the carbine is in about FINE condition and were it not for one patch of moderate pitting roughly in the middle of the barrel, it would rate very fine or better. The bore is mostly mirror bright and has strong, crisp rifling the entire length of the barrel. The bore shows some lightly scattered pitting here and there, as well as that one patch of moderate pitting in the middle of the barrel. The brass frame has a lovely, untouched and uncleaned dark butterscotch patina that is very attractive. The buttplate and other brass furniture have the same matching, deeply bronzed patina as well. The hinged breechblock operates exactly as it should and moves smoothly. The block and receiver are both serial numbered 2274 and this number is present under the barrel as well. The action of the carbine is excellent and fully functional, and the gun remains in mechanically fine condition. The extractor under the barrel still functions smoothly as well. The carbine retains its original multi-aperture L-shaped, flip up rear sight, as well as the original front sight. The original sling bar and ring is present on the reverse of the frame. The bar and ring do show some light pitting and scattered oxidation. The stock and forend of the carbine rate about VERY GOOD as well. Both pieces of wood appear to have been varnished at some point long ago and subsequently had this varnish stripped off. The stripping left the wood a little light and a little dry, so I applied a quick coat of Kramer’s Best Antique Improver to bring the wood back. Another coat or two would not hurt the wood and all and would help bring back the richness of the grain. They both the stock and forend show a substantial number of bumps, dings and mars from service and use. The thin, “splinter” style forends of these guns often show substantial cracking, and the wrist joint area is prone to cracking as well. The wood of this gun remains solid and complete and both the forend and the butt are free of any breaks, cracks or repairs. There are some deeper scuffs, scars and scrapes here and there in the wood, but no major damage or repairs are noted.

Overall, this is a very attractive example of a fairly scarce and desirable 2nd Model (Greene) Warner’s Patent Carbine. The gun remains in complete and original condition with no repairs or replacement parts. The frame and buttplate have a wonderful, untouched patina, and the stock, although well-worn from issue and use, remains very attractive as well. With more than half of the all Warner Carbines produced having been sent to France for the Franco-Prussian War, it is hard to find a nice example of these guns for sale at a reasonable price. This is a really nice, complete gun for a very fair price, that will be a great addition to your carbine collection.