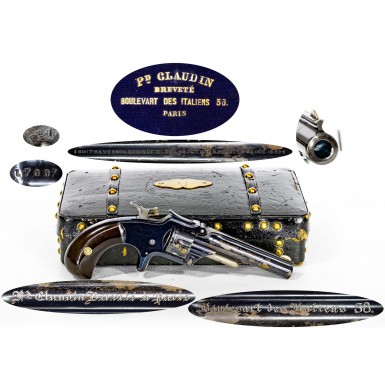 This is a VERY FINE  condition example of a rarely encountered foreign retailer marked and cased Smith & Wesson Model #1, Third Issue single action pocket revolver. The Model 1 was the first truly successful self-contained cartridge revolver produced sold in the US. The seven shot revolver was chambered for the .22 short rim-fire, a cartridge that is still available today, although it is now produced with smokeless powder, rather than the black powder of the period. The Model 1 was initially introduced in 1857 and utilized the most important feature for a successful cartridge revolver; the bored-through cylinder. While the concept was not new and had been introduced in Europe a few years earlier, it was Rollin White who patented the design in America, successfully creating an effective monopoly on the production of cartridge revolvers until the patent expired. Smith & Wesson acquired the exclusive rights to the patent and one of the most successful handgun makers in American history was off to the races.

The Model was a single action, seven-shot revolver with a sheathed spur trigger. The revolver used a “tip-up” system for loading and unloading. Releasing the barrel catch allowed the barrel to be “tipped up”, which allowed the cylinder to be removed from the frame. At this point the cylinder could be loaded with cartridges or unloaded. The cartridges could be punched out of the chambers with the fixed ejector rod that was located under the barrel. The barrel itself was octagonal with a top rib. The frames of the first two major production variants were of brass with square butts, while the last major production variant had a bird’s head grip frame of steel. The first two major variants were equipped with smooth, round cylinders, while the last production version used a fluted cylinder. Between 1857 and 1881, a total of 259,780 Model #1 revolvers, making it one of the most successful handguns produced during the 19th century and cementing Smith & Wesson in history as one of the most important revolver makers in America.

The first Model 1 revolvers are referred to by collectors as “1st Issue” guns. They had rounded frames that were made of brass and were silver plated. The 3 3/16” long ribbed, octagonal tip-up barrels and cylinders were blued. Between 1857 and 1860 Smith & Wesson produced some 11,617 of these early production pocket sized handguns. During the production run of the 1st Issue Revolvers, no less than five distinct variants were produced.

In 1860, the “2nd Issue” Model #1 was introduced. These guns had flat sided frames and incorporated many of the minor mechanical improvements that had been developed during the production of the 1st Issue revolvers. Again, the revolvers were produced with 3 3/16” ribbed octagonal barrels that were blued. Silver plated frames and blued cylinders in conjunction with the blued barrels were the standard finish, along with varnished rosewood grips. The 2nd Issue revolvers were produced from 1860 through 1868 with 117,000 being produced.

In 1868 the final major production variant of the Model #1 was introduced, known to collectors as the “Third Issue” revolvers. These guns introduced a new barrel length of 2 11/16” in addition to the standard 3 3/16”. The new barrels were still ribbed but were now round instead of octagonal. The frame was now made of steel instead of brass and the grip frame now had a rounded, “bird’s head” profile. The new revolvers introduced fluted cylinders instead of smooth round ones and also introduced new finish options. Standard finish choices now included a blued barrel and cylinder with nickel plated frame instead of the earlier silver plated frame, full nickel and full blue. A wider variety of grip options were also offered. During the production of Third Issue revolvers from 1868 to 1881, a total of 131,163 of the guns were produced, exceeding the total production of 1st and 2nd Issue revolvers combined.

The pistol offered here is really attractive and scarce example of French retailer marked and cased Smith & Wesson Model #1, Third Issue revolver that remains in VERY FINE condition. The pistol has the full blue finish with a color casehardened hammer and ejector rod. The gun retains about 75%+ of the original bright blued finish overall, with the majority of the loss on the barrel, which appears to be the result of flaking, as well as some flaked loss on the cylinder. The top of the barrel rib is roll engraved with the last variant of the Smith & Wesson Model #1 address and patent information and clearly reads:

The roll mark is flanked by a pair of Maltese Crosses. The revolver is serial numbered 17,667, placing it fairly early in the production run of Third Issue revolvers, likely circa 1868-1869. Matching serial numbers are found on the bottom of the butt and inside the right grip panel. The matching alphanumeric assembly mark EE7 is stamped on the lower right side of the frame under the grip, on the face of the cylinder and on the rear face of the barrel lug. The most interesting markings on the gun are the ones added by the Paris retailer who sold the gun. The barrel is engraved on either side of the barrel rib in a crisp Gothic-styled hand and reads

Ferdinand Claudin was Paris-based gunmaker, who like most metropolitan based gunmakers offered guns from other makers for sale as well. According to Heer der Neue Stockel Volume 1, Claudin worked circa 1835-1890. He first came to prominence in 1835 when he displayed a “richly crafted rifle” at the Paris Industrial Exhibition, and he returned to display his work in 1839 and 1844. Claudin’s shop was located at 9 Rue de la Tonnellerie from 1839 to 1855, moved to 1 Rue Jacquelet in 1850 and finally relocated to the Boulevart des Italiens address in 1870, where he remained until the end of his time in business.

The revolver is contained in a well-made French fitted retailer case that is also marked by Claudin. The case is wood, covered in tarred fabric and produced to resemble a travel trunk with an arched top, brass tack decorations and brass furniture. There is a brass name plaque attached to the top and a brass lock mounted on the face of the casing. The interior of the fitted case is lined in crushed purple velvet and the pillow in the lid is stamped in four gold leaf lines:

The casing has an empty area that was likely intended to store a box of ammunition.

As noted, the revolver remains in VERY FINE condition and retains the large majority of its original bright blued finish. The gun is a standard production revolver with a 3 3/16” ribbed round barrel, fluted cylinder and varnished rosewood grips. The majority of the finish loss is on the barrel, where the blued has flaked and left a smoky gray patina where the finish is missing. The flaking may be the result of the retailer engraving on the barrel. There is also a light turn line on the cylinder as well as some flaked finish loss. The metal is smooth throughout with no pitting and only some lightly scattered flecks of minute surface oxidation here and there. The hammer retains about 70%+ of its vivid mottled case coloring with some fading and dulling, primarily around the edges and contact points. The ejector rod had faded and dulled to mostly pewter gray patina with hints of mottling. The markings remain clear and crisp throughout and are fully legible. The revolver remains in excellent mechanical condition and functions crisply with perfect timing, indexing and lock up. The revolver remains very tight and there is almost no wobble or wiggle at the barrel to frame junction. The bore of the revolver remains in VERY FINE condition and is mostly bright with some lightly scattered minor surface oxidation and some lightly scattered minor pitting. The grips remain in about EXCELLENT condition and retain nearly all of their original finish. The varnished rosewood panels are free of any breaks, cracks or repairs. They do show some lightly scattered handling marks and some minute dings. The casing remains in about FINE condition with the usual expected light wear on the exterior, including some scuffs and mars. There are a couple of tiny tears in the tarred fabric covering, a couple of corners that have worn through and a tiny crack in the face of the upper case lid lip. The original lock remains in the case and the correct key is present. However, the lock is loose in the case and trying to lock the case causes the lock mechanism to move and could potentially damage the case. The interior of the case retains a rich, dark purple color and shows only lightly scattered wear. The gold leaf printed retailer mark on the interior remains almost completely intact.

Overall, this is a really lovely example of a rarely encountered French retailer marked and cased  Smith & Wesson Model #1, Third Issue revolver. While these guns in and of themselves are not that uncommon due to the large production figures, foreign retailer marked examples are extremely rare. Based upon the serial number of the gun and the address in the lid of the case, we know the gun was probably made in 1868-1869 and then sold no earlier than 1870. That puts it right in the time frame of the Franco-Prussian War and may well have been sold to provide personal protection for a wealthy Parisian who was terrified of the Prussians who were invading France. This would be a fantastic addition to any advanced collection of Smith & Wesson rarities, or a collection of 19th century European revolvers. The gun is really attractive, completely complete and correct and retailer casing is just wonderful.