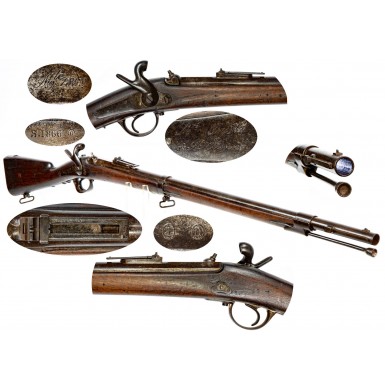 In 1837, the French military adopted the percussion ignition system  for their small arms. The first newly produced percussion arm to be manufactured by the French was the Model 1837 Delvigne-Pontcharra “Sharp Shooter’s Carbine”. The rifle-length percussion ignition muzzleloader had a 34.25” (870mm) barrel with an 18mm bore rifled with six rounded grooves. The gun introduced a rudimentary back action lock to French long arms and Delvigne’s chambered breech system. This system provided a sub-caliber chamber for the powder, with a lip upon which the bullet sat. By striking the bullet a hard blow with the heavy, cupped-head ramrod it was slightly compressed, which expanded the base of the bullet, so it would engage the rifling in the bore. The M1837 Rifle used a propriety bullet with a special sabot designed by Colonel Pontcharra, thus the dual designation of the design as Delvigne-Pontcharra. With this system the first sub-caliber, “expanding base” ammunition was utilized in a percussion military arm, providing the genesis for the design of Claude Minié, which would result in the development of the most successful and famous of this pattern of ammunition, the Minié Ball.

In 1840, the French began the process of updating their stocks of older flintlock weapons to percussion. At the same time, they adopted a new pattern of light infantry rifle, the Model 1840, known as the Carbine de Munition. This rifle retained the Delvigne chambered breech but reduced the groove-to-groove caliber to 17.5mm (about .69 caliber), although most references measure the groove diameter at nominally .71 caliber. It adopted a slightly shorter, 32.625” barrel and introduced more conventional, four-groove rifling for the bore with a rather slow twist of about 1:65, essentially ½ turn in the length of the barrel. The back action lock was also refined. Finally, a long-range rear sight, consisting of a fixed notch and folding leaf with apertures for 300, 400, 500 and 550 meters was added. The sight was not marked with graduations. The new rifle, also known as the Carbine du Thierry, was iron mounted with a pair of spring-retained barrel bands, the upper slightly larger than the lower. The triggerguard tang retained the finger grooves that had been common on French muskets since the beginning of the 19thcentury, and a pair of sling swivels were provided on the lower barrel band and in the toe of the stock. A saber bayonet lug without a guide key was located on the right side of the barrel near the muzzle. As with the Model 1837, a heavy cupped-head ramrod with a torque hole was provided to upset the ammunition in the Delvigne breech. The long chambered breech is clearly identifiable by the seam between the breech and barrel, which is visible just forward of the rear sight base. While the Model 1840 was the first widely issued rifled arm to see service with the French military, it was rather quickly superseded by the Model 1842 Rifle, which retained the Delvigne breech, but which forged the breech and bolster directly to the barrel, rather than threading the breech assembly into the barrel. In 1846, the French abandoned Delvigne’s chambered breech design in favor of the Thouvenin “pillar breech” system. After a decade of dealing with the Thouvenin rifle’s short comings, the French finally adopted Claude Minié’s expanding base ammunition design, and the Model 1857 rifle, officially making the earlier designs obsolete. This was subsequently replaced by the Model 1859 rifle rather quickly. The M1857 and M1859 Rifles were known as Chasseur de Vincennes rifles, although the name appears to have been applied to some of the earlier pillar breech rifles as well. The M1859 was the last of the percussion ignition, muzzleloading rifles to see French service, as their next official rifle would be the Model 1866 Chassepot; a single shot, bolt action breechloading rifle that used a combustible cartridge.

With the coming of the American Civil War, many of the obsolete pattern rifles were sold to US buyers. Herman Boker purchased 8,689 Delvigne Rifles that were likely a combination of by M1840 and M1842 rifles. This represents about 24% of the total of some 36,000 French and Belgian pattern rifles purchased by US buyers. The balance were a combination of Thouvenin pattern pillar-breech rifles and the newer M1857 and M1859 Minié Rifles. C.K. Garrison delivered some 20,938 “Chasseur de Vincennes” Rifles to the Ordnance Department, but these were almost certainly a combination of all the later, post-Delvigne pattern arms. More than likely some were of Belgian origin as well. These rifles were typically categorized by the Ordnance Department as “Rifles, Belgian or Vincennes, Saber or Sword Bayonet - .71 caliber.” Interestingly, during the Franco-Prussian War, the French were using one of the most advanced beech loading, bolt action rifles in the world; the Model 1866 Chassepot which has replaced the M1859 rifle. However, due to the limited availability of the new rifles, thousands of obsolete muzzleloading percussion rifles were pressed into service. Many were also altered to cartridge via the Tabatière system, the French equivalent to the British Snider and US Trapdoor alterations. Although the Chassepot was superior to the Prussian needle rifles, the percussion and cartridge altered rifles were woefully inadequate in combat against the more modern Prussian arms and proved no match for them.

Offered here is an about VERY GOOD,  untouched, attic condition example of a French Model 1859 Percussion Rifle, or Chasseur de Vincennes Rifle. The back action lock is clearly marked in two script lines: Mre Impale / de St. Etienne, indicating the rifle was produced the Imperial  Manufactory (armory) at St. Etienne. The designation of the armory as “imperial” rather than “royal” indicates that the rifle was produced during the French 2ndEmpire, under the rule of Napoleon III from 1852-1870. The tang of the rifle’s barrel is clearly marked Mle 1859. The left angled breech of the rifle is marked with a pair of French arsenal controller proof marks. The right angled breech is marked a Gin an oval and the date mark S1866, indicting production at St. Étienne in 1866. This indicates that the gun was produced too late to see service in the American Civil War, but instead almost certainly fought in the Franco-Prussian War as one of the thousands of obsolete percussion muzzleloaders still in French service. Traces of the original storekeeper’s cartouche are present in the obverse buttstock, along with the boxwood plug that indicated government ownership, much like the Broad-Arrow mark on English arms of the period. Sadly, the markings of the cartouche are too light to read, and the boxwood plug no longer retains any markings either. A small (CROWN) / G inspection is stamped in the stock at the wrist and remains quite legible.

The rifle has a 34 1/8” long barrel rifled with four grooves and measures .702” which is the nomial French standard of the era, .708” caliber. The rifle is 49 ¼” in overall length. The rifle appears to remain in its 100% complete, correct and original configuration in all respects. The metal has a thick, heavily oxidized brown patina with scattered surface roughness and scattered light pitting, as well as some areas of more moderate pitting. Despite the heavy patina, the markings in the metal remain quite clear throughout. The action of the rifle remains fully functional with the lock operating crisply and correctly in both the half and full cock positions. The bore of the rifle retains visible rifling, but is heavily oxidized and moderately pitted, rating only about FAIR at best. It is likely that a good scrubbing would improve the bore at least slightly, but this rifle will not likely ever be a shooter. The original and correct 1,100-yard adjustable leaf rear sight is in place on the breech, as is the accompanying front sight blade on a block base. The original saber bayonet lug and guide key are in place on the barrel and both original sling swivels are in place on the rifle as well; one in the toe of the stock and one on the lower barrel band. The original ramrod is in place in the channel under the barrel. The rod is full-length and retains fine threads at the end. The stock of the rifle remains in GOOD condition. The stock was lightly sanded long ago, and this has severely thinned the storekeeper’s cartouche on the obverse butt. As noted, the boxwood plug remains in place in the obverse butt, a part often missing. The stock was extremely dry when I received the rifle, so a very light coat of Kramer’s Best was rubbed on the wood. The stock remains somewhat dirty and other than the quick wipe down with the Kramer’s appears to have been untouched for many years. The stock shows numerous scattered bumps, dings, scuffs, mars and surface scrapes that are typical of a 150+ year old military rifle that apparently spent most of the last century in an attic or similar location.

Overall this is nice, solid, and unmolested example of a scarce French Model 1859 Rifle. These rifles were not produced for a significant period of time and many were altered to cartridge during the period of use leaving percussion examples somewhat scarce. The gun was produced the same year that the Chassepot was adopted, making it an interesting contract to that much more modern rifle. The gun remains fairly crisp and has a wonderfully thick patina. It would be a nice addition to any collection of  French military arms of the 19thcentury or to a collection of Franco-Prussian War guns, as the 1866 date lets us know that this gun did not come here for the Civil War.