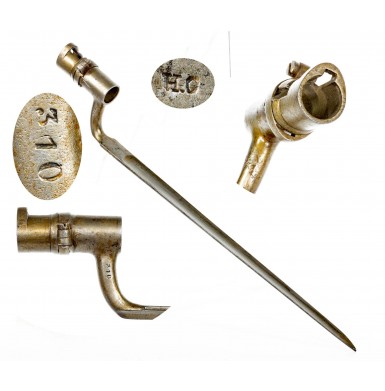 This is a very nice example of a French (or potentially Belgian) Cadet Socket Bayonet that essentially follows the form of the French AN IX and later Model 1822 socket bayonets. The bayonet is 15 1/8” in overall length (384mm) with a 12 3/8” long blade (304mm) that has an 11” face flute that passes through the tip of the blade and is ¾” wide at the widest point near the ricasso. The socket is 2 7/16” in length and has a 15/16” muzzle to stud distance. The muzzle diameter of the face of the bayonet is .71” (18mm). As noted, the bayonet follows the pattern of the French AN IX and later M1822 patterns and is about 80% the size of an AN IX socket bayonet. Like those patterns, the blade has squared off shoulder and the socket is mortised for a lug that is mounted on the bottom of the gun’s muzzle. After searching through my references, the bayonet that most closely conforms to the dimensions listed above is found on page 146 of Paul Kiseling’s Bayonets of the World – The Complete Edition and is shown as figure #549. That bayonet is identified as the one for the Fusil de l’école de Saint Cyr; the military academy musket of Saint Cyr. The École de Saint Cyr is the French national military academy, roughly equivalent to West Point in the United States. The school was established by Napoleon in 1802 at Fontainebleau and remains in service today. Kiseling notes that no known examples are known and that only 401 were produced. It seems unlikely that this is one of those 401 cadet bayonets, but clearly based upon the dimension and styling this would be an appropriate bayonet for use by military cadets during the first half of the 19th century.

The bayonet bears few markings. The face of the blade is deeply stamped H.C, which is likely a maker’s mark, and could suggest a Liege maker produced the bayonet. The right side of the shank is rack numbered 301, which would be typical of a cadet bayonet and if you are an optimist that number suggests it might be one of the 401 Fusil de l’école de Saint Cyr Bayonets. The only other marking are file slash mating marks on the rear edge of the socket.

The bayonet remains in VERY GOOD+ to NEAR FINE condition. The metal is mostly smooth with a dull pewter patina and a large amount of old dry oil on its surface which has turned brown over time. There is some scattered minor surface oxidation and pinpricking, as well as a couple of small patches of light pitting. The bayonet retains its original locking ring, which moves smoothly and works as it should. All of the markings remain fully legible, what few markings there are.

Overall this is a solid, attractive and complete example of a French or Belgian cadet socket bayonet from the first half of the 19th century. This would be a nice addition to your collection of European socket bayonets and if you are lucky, might fit a cade musket in your collection as well.