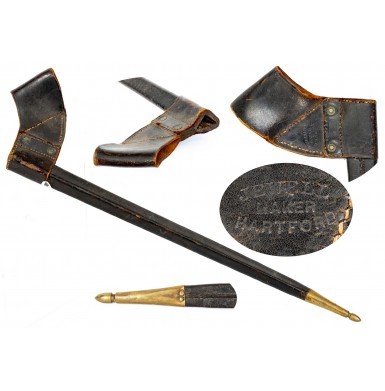 This is a FINE condition example an original Civil War era US Pattern 1859 Socket Bayonet Scabbard produced by the Jewell company of Hartford, CT. More than 1,500,000 .58 caliber Model 1855 socket bayonets were produced during the Civil War era, and the bayonet had a service life of roughly two decades, from its acceptance in 1855 through 1873 when it was finally replaced by US Model 1873 bayonet for the .45 caliber US Model 1873 Trapdoor rifle. During that time, the M1855 was the standard socket bayonet for all US .58 percussion rifle muskets, and many of the early Allin conversion alterations of Civil War muskets to breechloading rifles. The bayonet pattern itself remained unchanged during this period except for a very minor update that took place in November of 1863 and would be incorporated into production during January of 1864. This minor change was to cut the locking ring mortise an additional .2”, allowing the ring to rotate slightly further when clamping the bayonet to the musket, thus insuring a tighter fit. Collectors refer to these later production M1855 bayonets with the longer mortise cut in the locking ring “Type II” M1855 bayonets, while those produced with the earlier shorter cut are “Type I” bayonets.

When the M1855 socket bayonet was adopted, the standard bayonet scabbard was the US Pattern 1851. This was the first general issue scabbard to incorporate a permanently attached folded leather belt frog to the scabbard body. Earlier pattern US scabbards typically used a frog hook on the face of the scabbard to attach the scabbard to a cross belt, baldric or separate belt frog. The leather belt loop of the Pattern 1851 scabbard was secured by stitching it to a piece of leather that wrapped around and was sewn to the throat of the scabbard. Collectors refer to this style of assembly as “sewn only.” In 1859, an updated version of the P1851 scabbard was adopted to accompany the new series of infantry accouterments that had been approved in 1857. This new Pattern 1859 scabbard added two reinforcing rivets at the junction between the belt loop and the leather piece sewn around the throat of the scabbard. Collectors refer to this style of construction as a “two rivet” scabbard. The specifications also changed the construction of the belt loop from blackened buff leather on the Pattern of 1851 to black bridle leather on the Pattern of 1859. This pattern remained in use from its adoption through February of 1863, when another update was adopted to the scabbard design. The Pattern of February 1863 increased the number of rivets in the frog from two to seven, resulting in the collector’s nickname of “seven rivet” scabbard. It also eliminated sewing in the frog and added two additional pins to the face of the triangular brass finial at the tip of the scabbard. Originally, the tips of the 1851 and 1859 pattern scabbards were secured with two small brads that entered through the rear of the finial, attaching it to the leather scabbard body. This was found to be insufficient in the field and in 1863 the number of brads was doubled and two were added on the front angled surfaces of the finial. Due to the fact that the Pattern 1859 scabbards were in use prior to the Civil War and the heavy use that these scabbards saw during the first two years of the war, they are scarce on the modern collector market. When a Pattern of 1859 scabbard is found, it usually shows heavy use and often the finial is replaced or repaired.

Offered here is a FINE condition example of a US Pattern of 1859 “Two Rivet” Socket Bayonet Scabbard that was produced by the Jewell Company of Hartford, CT. The reverse of the frog loop is stamped with a three-line maker’s cartouche in the triangular bordered section between the belt loop and the throat attachment:

The firm of Jewell, Pliny & Sons was a leather dealer and manufacturer of leather machine belting that was located in both New York City and Hartford, CT. They first appeared in city directories circa 1845 as leather merchants and by 1849 had entered the industrial belting business, a market they would remain heavily involved in through the end of the overhead drive industrial machine era in the early 20th century. The firm had their first US military contract issued on September 5, 1862 for 10,000 sets each of .58 caliber and .69 caliber accoutrements, with an additional contract issued on January 28, 1863 for another 10,000 .58 caliber accoutrements. Those contract dates would suggest that they were producing Pattern 1861 cartridge boxes with slings, along with the standard infantry waist belt, cap pouch and Pattern 1859 bayonet scabbards. Other than the 30,000 sets of infantry accoutrements, I am not aware of any other Civil War era production contracts with Jewell. During the World War I period the company received contracts to produce brass mounted leather scabbards for the US Model 1917 Trench Knife. This appears to be the last of their involvement with the US Ordnance Department and the firm apparently ceased to exist not long after the end of World War I.

As noted, the scabbard is in FINE condition and remains quite crisp throughout. The scabbard is 100% complete, correct and original and shows only some light, real world wear. The scabbard is full-length and retains all of its stitching along the rear seam and in the belt loop area. This stitching is all tight and secure. The original brass finial is in place at the tip of the scabbard, secured by the two original copper pins. Original Pattern 1859 scabbards are rare enough but finding one with an original finial tip that has not be replaced or repaired is quite difficult. The scabbard body remains solid and quite usable. It retains most of the original period finish, which is a dark chocolate brown color that suggests the scabbard may have been processed or dyed in manner that was not completely consistent with Ordnance Department specifications, otherwise it would not have oxidized with age from its original black to the more dark brown color. The surface shows some minor wear, scuffing and finish loss. Most of this is along the sharp edges and contact points on the throat frog and belt loop, as well as at some handling points. There is some scuffing around the throat and the edges of the belt loop, and the belt loops shows some wear at the entry and exit points. The scabbard body shows only some light wear, although it is creased just above the finial, which has left the final slightly bent on the leather scabbard body and with a deep line in the triangular face of the leather where the tip has worn into the leather. The original finial remains tightly secured with to the scabbard and had a moderately oxidized bronze patina with some minor dings and impact marks. The JEWELL mark on the reverse of the belt loop remains crisp and clear and is fully legible.

Overall this is an extremely nice example of an early Civil War production contract bayonet scabbard worthy of addition to an equally fine set of infantry accouterments or to add to the display of a very high quality US Model 1855, Model 1861 or Model 1861 Special Model .58 rifle musket with a minty bayonet. Finding an early “2 Rivet” scabbard in this condition is extremely difficult and really fine and crisp examples like this one are quite rare. While minty examples of the late war, 1864 “8 Rivet” scabbards are relatively available, primarily due to their lack of use during the war, early war examples like this just don’t pop up for sale very often. Don’t miss your chance to own a great condition, maker marked example of an early Civil War Period Pattern of 1859 Socket Bayonet Scabbard that you will be very proud to own and display.