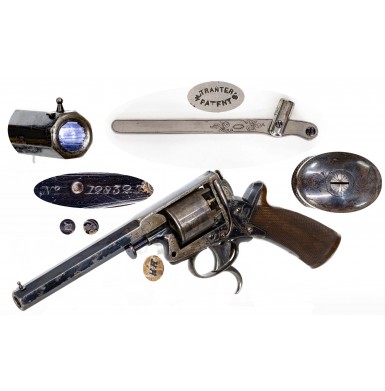 This is a FINE condition example of a large frame, 54-Bore Tranter’s Patent Transitional 2nd/3rd Model Double Trigger Percussion Revolver in a very desirable serial number range that suggests possible use by the Confederacy during the American Civil War.

William Tranter was born in 1816 and died in 1890, and during his working life he was one of the most prominent Gun, Rifle & Pistol Makers in the Birmingham (England) gun trade. He went into business for himself circa 1840, after completing his apprenticeship with Hollis Brothers & Co, which he had begun in 1830. Tranter continued in the trade until 1885, just five years before his death. After his decade of work learning the gun trade at Hollis Bros & Co (later Hollis & Sheath), in 1840 Tranter bought the established gun making business of Robert Dugard at 29 ½ Whitehall Street. Over the next decade he worked for himself and in joint ventures with his old employers John & Isaac Hollis as well as with Isaac Sheath. By 1850 he had located his primary business at 50 Loveday Street, where he was listed as having “shops, sheds, steam machinery, yard & premises”. Tranter secured his first British patent related to firearms in October of 1849 when he registered a “pepperbox mechanism and lever catch for pistol locks”. In January of 1853 he registered British Patent Number 212 (1853) for a pair of “self-cocking” pistol mechanisms and a safety mechanism. In December of the same year, he registered designs for a double-action revolver mechanism, lubricated bullets and wadding, and a breech loading mechanism, all of which were covered by Patent Number 2921 (1853). In August of 1856 he registered the designs for a “double trigger revolver mechanism”, along with several other designs, all of which were covered by British Patent Number 1913 (1856). Tranter continued patenting firearm designs as late as 1887, after he had actually left active work in the gun trade.

Tranter’s most successful series of arms were his “self-cocking” revolvers, which were initially introduced in 1853. The earliest revolvers utilized Robert Adams’ patent for a solid, one-piece frame and barrel that were machined from a single forging. Tranter’s initial production run of revolvers included both M1851 Patent Adams style lock works, and Tranter's own patented lock works. The original “Tranter” type revolvers, known to collectors as 1st Model Tranters had no provision for a fixed loading lever. The lever swiveled on a stud that projected from the left side of the frame but had no provision to retain the lever when it was mounted on the revolver. The lever was intended to be stored in a case or carried in the pocket. Most of these guns were manufactured on Adams Patent frames and have Adams Patent serial numbers (really patent tracking numbers to pay royalties to Adams) and these numbers are followed by a Y-suffix.

The 2nd Model Tranters also had a pin on the frame that allowed the attachment of a removable loading lever, but the pin had a small projection that allowed the lever to remain attached to the gun unless a notch in the lever was aligned with the stud projection to remove it. The later example of these guns, manufactured after about 1856, have Tranter Patent serial numbers and end with a T-suffix. These guns not only include Tranter Patent lock works, but also a newly improved version of the Adams solid frame, which was patented by Tranter in 1856. At this point Tranter revolvers rarely appear in the Adams assigned serial number range. The 3rd Model Tranters had a more permanently attached loading lever, which was secured by a screw. The 3rd Models appear to have all been produced in the T suffix Tranter serial number range. All of these first three models were based on his “double-trigger” system (initially referred to as his “hesitating mechanism” on the early production guns), which utilized a second “trigger” under the trigger guard to rotate the cylinder and cock the hammer. The trigger inside the triggerguard was used to trip the sear and release the hammer. The 4th Model Tranterrevolvers (which were introduced in 1856 and are all in the Tranter T-suffix series) used a single trigger and had what would today be called a conventional “double action” lock work.

All of these revolver patterns were produced in a variety of calibers, with 54-Bore (.442) “Holster Size” and 120-Bore (.338) “Pocket Size” revolvers being the most commonly encountered calibers and frame sizes, and the mid-sized 80-Bore (.387) “Belt Size” being less often encountered. Some of the guns were also produced in the exceptionally large and powerful 36 and 38 bore sizes, which were larger versions of the holster size guns, and were about .50 caliber! Barrel lengths varied as well, with the larger caliber arms typically having longer barrels. All of the guns were 5-shot percussion revolvers, and typically featured checkered one-piece walnut grips, although smooth wooden grips and other grip materials are known to have been used on a special-order basis. The Tranter patent revolver was the primary competitor with the Adams and Beaumont-Adams patent revolvers in England and was also exported widely. Pre-Civil War Tranter revolvers are known with US retailer marks, indicating that his designs were at least somewhat successful in the United States. The majority of the retailer marked guns are from the south, with most of them being marked by New Orleans retailers. Based upon extant examples, the firm of Hyde & Goodrich (later Thomas, Griswold & Co) appears to have been the primary importer of Tranter Patent revolvers into the southern United States. Most of these retailer-marked guns were sold cased with accessories, although some guns were certainly sold without the expensive casings and accouterments. During the course of the Civil War, it appears that the importation of Tranter revolvers was somewhat limited, at least in terms of Confederate central government purchases. However, period advertisements in the south and extant examples with southern provenance make it clear that the guns were imported by blockade-runners as speculative items for sale in the south. Such famous Confederates as General John Hunt Morgan (3rd Model #3758T), General J.E.B. Stuart (4thModel #8673T), General John Magruder (5th Model – unknown number – see Albaugh) and Colonel Dabney H. Maury (3rd Model #7993T), who served on the staff of General Earl Van Dorn, all owned documented Tranter revolvers.  The famous “Pratt Roll”, which lists the revolvers in the possession of Lt. Julian Pratt’s squad of troopers in Company H of the 18th Virginia Cavalry, lists two Tranter revolvers, with the serial numbers 15,465 and 15,476. The squad roll is from July of 1864. This indicates that Tranter revolvers in the mid 15,XXX serial number range were in use by southern forces, and in the field by that time. Other Tranter revolvers with southern provenance include guns which are retailer marked by T.W. Radcliffe of Columbia, SC. Additionally, a 10 March 1863 advertisement in the Richmond Times Dispatch for H. E. Nichols of Columbia, SC read in part:

All of this evidence indicates that at least some of the Tranter revolvers produced during (as well as prior to) the Civil War, saw Confederate use. At least one Tranter that I previously owned was most likely imported by Schuyler, Hartley & Graham of New York. The gun was an engraved, nickel-plated 4th Model 54-Bore revolver with relief-carved ivory grips. That gun was serial number 13619T.

Dating Tranter revolvers based upon their serial numbers is somewhat problematic, as frames were sometime produced in advance and the guns completed at a later date. What we do know is that the “T” serial number suffix came into use around serial number 2200, sometime between 1854 and 1856. We also know that Tranter produced revolvers using Adams' patent serial numbers and a “Y” suffix from about 1853 through about 1856. These guns appear in several serial number ranges, as assigned by Adams, including the 2X,XXX range. From extant examples of Tranter’s with specific dates associated with them, it appears that those Tranter revolvers with serial numbers under about 20,000 (and possibly some of the early guns in the 20,XXX range) with T suffixes were produced prior to the end of 1865. All “Y” suffix guns predate the Civil War by at least four or five years.

Overall, this is an extremely attractive example of a large frame 54-bore 3rd Model Tranter percussion revolver that was almost certainly produced around the time of the eruption of the American Civil War. The gun is complete and correct and original in every way and remains in a very nice state of preservation. It retains its original and very interesting transitional 2nd/3rd model loading lever, that might well have been an option offered for those who preferred to carry their Tranter in a hip holster.  If you have been wanting to add very nice condition Civil War period Tranter revolver to your collection but did not want to pay the premium for a southern retailer marked gun, this revolver offers the opportunity to purchase a likely Confederate imported gun for about half the price of one bearing a southern retailer mark. This is a wonderful example of a very interesting transitional 2nd/3rd Model Tranter that I know you will be very proud to add to your collection.