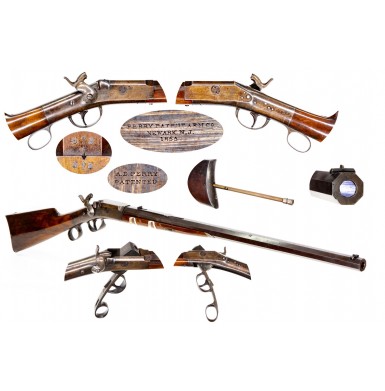 Alonzo D. Perry was a Newark, NJ based gun maker and inventor and the proprietor of the Perry Patent Arms Company from 1855-1860. Perry held several patents related to manufacturing arms, with his first (#6945) being issued on December 11, 1849. The patent was for a breechloading, percussion ignition firearms design that incorporated an early version of his automated priming mechanism. The primer system, which anticipated the concept that would be improved upon by R.S. Lawrence in 1859 for use in Sharps Rifles and Carbines, predated Lawrence’s efforts by a decade. Over the next few years Perry received three additional patents, #7147 on March 5, 1850 for a cartridge, #12,001 on November 28, 1854 for a breechloading firearms improvement and finally #12,244 on January 16, 1855 which was essentially the finalized version of the percussion breechloading system that is associated with Perry patent firearms.

The Perry system was a simple single shot, tilting breech design that was operated by lowering the trigger plate. The long hinged plate contained the trigger and trigger guard as well as a second loop at its rear that allowed a secure grip. When the plate was pivoted down and forward it tilted the breech down at the rear and exposed the face of the breech block above the barrel for loading. The chamber was then loaded from the front, much like the earlier Hall Rifle design or the later Burnside carbine design, both of which bear some resemblance in terms of the breech block design. The more innovative part of the design was the automated priming system. When the block was fully loaded, it aligned the percussion cone (nipple) with a channel drilled in the buttstock. This channel contained a removable brass 15” tubular percussion cap magazine that held fifty percussion caps. The spring tensioned percussion cap magazine would feed a cap onto the cone when the parts were aligned while the breech was open, eliminating the priming step when loading.

The Perry design generated enough interest with the US military that in 1855 the US Army ordered 200 of the early production “short frame” .54 caliber carbines with saddle rings. Despite some reports that a small number of roughly 25 were delivered, more recent research suggests none were ever delivered to the Army. In 1856 the US Navy ordered 150 of the later “long frame” carbine design. Again, these were in .54 caliber and had a 20 ¾” round barrel. This carbine did not include a sling ring as this was not necessary for use onboard ship. The initial deliveries to the Navy were rejected twice and in the end it believed that only about 50 were accepted. The less than satisfactory deliveries and multiple rejections probable ended any further chances for Perry to obtain any military contracts from the US government. Perry appears to have subsequently concentrated on producing sporting rifles and carbines, as well as some handguns that utilized the same tilting block action. Surviving examples show a wide variety of calibers, barrel lengths and features, suggesting that the guns were manufactured on at least a semi-custom basis, based upon customer orders. In the end it is believed that no more than about 1,500 Perry patent long arms were produced with a few hundred pistols at most. Today, all Perry patent breechloading arms are relatively rare and uncommon.

This Perry Breechloading Percussion Sporting Rifle was produced as a “Plains Rifle”, likely as a direct competitor to the Sharps Rifles of the period. The gun is 44 1/12” in overall length with a .50 caliber 26 3/8” heavy octagonal barrel that tapers slightly from the breech to the muzzle. The rifle weighs in at a fairly hefty 10 ½ pounds. The barrel measures about 1.1” wide at the breech and .97” at the muzzle, with the flats measuring about ½” along the barrel. The gun is rifled with seven lands and grooves or roughly equivalent width with a slow rate of twist. The rifle is equipped with an elevation adjustable leaf rear sight and a drift adjustable front sight. The gun incorporates Perry’s patented automatic priming system with the original spring loaded brass primer magazine tube in place in the butt. The octagonal barrel is browned,  and the frame and furniture are of blued steel. The Stock is of varnished walnut. The smooth, tapered forend is also varnished walnut with a pewter stock tip and is secured by a screw in the bottom and a single wedge with a German silver escutcheon.

The Perry Breechloading Percussion Sporting Rifle offered here remains in FINE condition and is extremely crisp and sharp throughout. The rifle is 100% complete and correct in every way. The rifle is serial number 578, and this number is stamped on the top of the octagonal barrel flat, on the top of the receiver, inside the triggerguard, on the barrel wedge and on the primer feed tube. It is also present inside the barrel channel of the forend in pencil. The top of the breech block is marked in two lines, perpendicular to the barrel:

The breechblock is also marked in three lines parallel to the barrel:

The rifle is otherwise unmarked on the exterior however it is marked on the lower right angled flat in two lines:

This is the mark of the Worcester, MA barrel maker who provided the barrel to Perry. The barrel retains about 80%+ of its original thinning browned finish with more finish present under the forend where it was protected than on the balance of the barrel. The finish shows thinning, wear and loss with scattered freckled patches of darker, oxidized discoloration and flecks of oxidation shot through the finish along the length of the barrel. The barrel retains fine, crisp edges and clear serial number stampings. The metal is smooth and free of any real pitting, although some freckled patches of light surface oxidation, some minor flecks of minute roughness here and there and a few minor areas of minute pinpricking. The bore of the rifle is in FINE condition and is crisply rifled with seven lands and grooves of roughly equal width. The bore is mostly bright with some scattered oxidized discoloration and along its length, along with some pinpricking. There is some light roughness and pitting in the grooves that is most noticeable in the last two to three inches nearest the muzzle. The frame retains about 10%-20% of its original blued finish, most of which appears to have been lost due to flaking. The balance of the receiver has a pleasing smooth plum brown appearance that is very attractive. The remaining blue gives the receiver a slightly streaky appearance. The action of the rifle is fully function and operates crisply in all aspects. The primer magazine tube is complete, correct and fully functional as well, as is the release mechanism in the butt of the rifle. The original leaf rear sight is present, although the sliding notched elevator is missing. The original dovetailed front sight base is in place, along with the German silver sight blade. The stock and forend are in FINE condition as well and retain much of their original varnished finish. The wood retains very crisp and sharp edges, particularly along the top edge where the top of the forend and the barrel meet. The wood is solid, full length and free of any breaks or repairs.  The wood does show scattered bumps, dings and mars from handling and use but shows no abuse or damage.

Overall, this is really attractive example of a Perry Breechloading Percussion Sporting Rifle in a large caliber, heavy barrel “Plains” configuration. These are scarce guns and rarely show up in such nice, crisp condition. This would be a fine addition to any collection of mid-19th century American sporting rifles and could well have been built for use out west as a large game gun. With only about 1,500 Perry long arms of all types produced circa 1855-1860 these rifles do not appear on the market very often and this is a really fine example of these scarce and desirable guns.