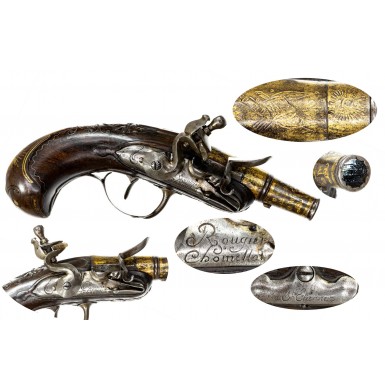 This is a really gorgeous flintlock muff pistol produced by the French firm of Rougier-Chometon in St. Etienne. The pair of gunmakers worked together circa 1775-1780, placing their operation period during the American Revolution. The diminutive pistol measures only 5 ¾” in overall length with a 1.5” barrel. The pistol has a rifled bore and is nominally 9mm (about .357 caliber). The pistol is clearly engraved Rougier / Chometon in two lines under the flash pan, with the letter “n” in Chometon covered by the tip of the frizzen spring. The side plate is engraved St. Etienne in script. The pistol has no other external markings, although it is profusely decorated with gold gilt decorations over a browned barrel and butt cap, and with engraved patterns on the barrel and some of the furniture. The barrel is decorated with panoplies of arms and a radiant sun motif, as well as with some flowing foliate themes. The butt is decorated with a radiant crescent moon. The stock is decorated with raised carved foliate themes around the breech plug tang and inlaid silver wire on the back strap. The furniture is all iron with the side plate, triggerguard and lock polished bright. The flint lock is lightly engraved at the tail with rounded, bridled and fenced pan and swanneck cock. The toe of the frizzen has a distinct curl and the frizzen spring has a rudimentary trefoil finial.

The pistol remains in VERY FINE condition with the barrel retaining a nice mixture of the original brown which has blended with an oxidized patina, making it nearly impossible to tell where the finish stops and the patina begins. The barrel retains about 75%+ of its gold gilt wash and enhancements, with the engraving remaining crisp and clear and etched patterns remaining mostly clear and visible. The buttcap retains about 50% of the gold wash and has clear engraved details as well. The engraved lock and sideplate markings are clear and crisp. The bright steel parts have a medium pewter patina with freckles of surface oxidation and discoloration. The metal remains almost entirely smooth throughout with only some lightly oxidized surface roughness scattered here and there. There is some light pinpricking around the touchhole and at the breech, as well as around the muzzle. The pistol remains mechanically functional, but the mainspring is cracked, which means there is not a lot of tension or pressure available when the hammer is cocked. This could probably be repaired to improve the spring tension, or a new spring could be produced for the pistol. The twist off barrel removes easily from the breech and the threads are in very good condition. The rifled bore is in about VERY GOOD condition. It is moderately oxidized and mostly dark with crisp rifling and scattered pitting along its length.  The stock remains in FINE condition and is very crisp with sharp details at the carved apron. The wood is free of any breaks or repairs, but does show scattered bumps, dings and light marks from handling and use.

Overall, this is a really attractive and highly embellished French muff sized flintlock pistol produced during the period of the American Revolution. It would be a fine addition to any collection of high-quality 18th century flintlock pistols, particularly pocket guns or guns that might have been appropriate for carry by an elite lady of the era.